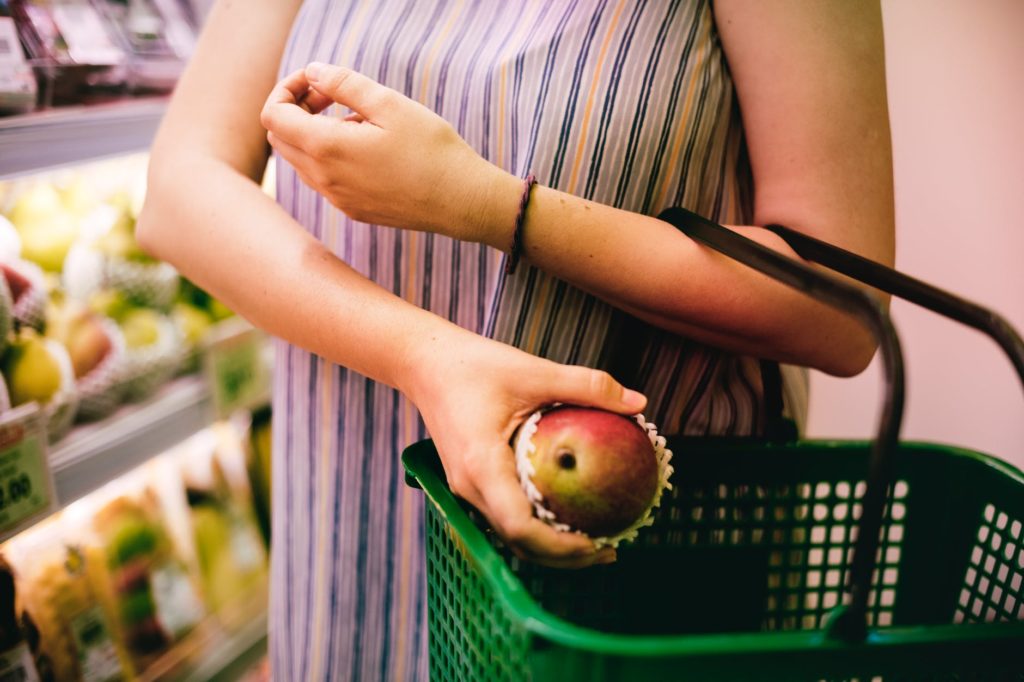 Our grandparents would like to reminisce about the days when they used to buy movie tickets for Rs 5-10. Nowadays it will cost you near Rs 200. In near future, it might be double. The simplest explanation for this increase in prices is- ‘Inflation’.

There have been a number of debates on the topic whether inflation is good or bad for an economy. However, before we discuss this complex question, first you need to understand what actually is inflation.

In this post, we are going to discuss what is inflation and why you should care about it. Here are the topics that we will cover today-

Overall, it’s going to be a very interesting post. Without wasting any further time, let’s get started.

Inflation is nothing but an increase in the general price of goods and services. It is measured as an annual percentage increase. Inflation can also be defined as the decline in the purchasing power of the currency. In general, a two percent increase in inflation shows a healthy economy. 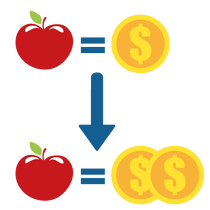 There are plenty of reasons which causes inflation, depending upon the location, type of economy, the status of government in terms of power and influence, and many other different factors. However, broadly here are the factors that are primarily responsible for causing inflation.

Inconsistency with growth in agriculture due to climate change or a natural disaster like flood, draught can hamper the supply to make the product. Inadequate growth of industry can also lead to less production of supply which ultimately leads to an increase in prices for manufacturing products. And hence price increases.

This is caused when an overall increase in demand for goods and services, which bids up their prices. It’s like too much money chasing too few goods. This usually occurs in rapidly growing economies. So, when there is more money circulation in the market that can cause inflation.

Not all raw materials are produced in one country. In the era of globalization, we depend on many countries for the supply of raw material. So, if the prices of a commodity which we import from other parts of the world increases then it leads to an increase in the prices of the product that is made from it. For example- if the price of oil or corn increase that makes high prices of products that relies on that material.

In some case when central banks govern interest rates, then demand for services can either increase or decrease giving an invitation to Inflation.

3. What are the effects of Inflation?

2. Hoarding: People buy durable and/or non-perishable commodities and other goods as stores of wealth, to avoid the losses expected from the declining purchasing power of money, creating shortages of the hoarded goods.

3. Social unrest and revolts: Inflation can lead to massive demonstrations and revolutions.

5. Allocative efficiency: A change in the supply or demand for a goodwill normally cause its relative price to change, signaling the buyers and sellers that they should re-allocate resources in response to the new market conditions. But when prices are constantly changing due to inflation, some agents are slow to respond to them. This results in a loss of allocative efficiency.

6. Shoe leather cost: High inflation increases the opportunity cost of holding cash balances and can induce people to hold a greater portion of their assets in interest paying accounts. However, since cash is still needed to carry out transactions this means that more “trips to the bank” are necessary to make withdrawals, proverbially wearing out the “shoe leather” with each trip.

7. Menu costs: With high inflation, firms must change their prices often to keep up with economy-wide changes. Changing prices is itself a costly activity as it will lead to the need of printing new menus, or the extra time and effort needed to change prices constantly.

4. An Extreme case of Inflation- 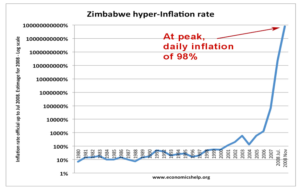 The daily inflation rate of 98.0%. Roughly every day, prices would double. It was also a time of real hardship and poverty, with an unemployment rate of close to 80%. 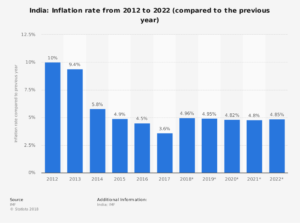 Quick Note: The above statistic shows the inflation rate in India from 2012 to 2017, with projections up until 2022. The inflation rate is calculated using the price increase of a defined product basket. This product basket contains products and services, on which the average consumer spends money throughout the year. They include expenses for groceries, clothes, rent, power, telecommunications, recreational activities and raw materials (e.g. gas, oil), as well as federal fees and taxes. (Source: Statista)

6. How is Inflation calculated?

1. Look up the average prices of the several products across a few years: – Inflation is calculated by comparing prices of standard goods across time.

2. Load the Consumer Price Index: – This is a breakdown, by month and year, of the changes in inflation based off of the averages mentioned in step 1. Any time the CPI is higher than the current month, it means there has been inflation. If it is lower, then there has been deflation. Inflation is calculated with the same formula in each country. Make sure the same currency is being used for all numbers in the calculation.

3. Choose the period of time for which inflation will be calculated: –Months, years, or decades can be used.

1. Learn the Inflation Rate Formula. This formula is simple. The “top” find the difference in the CPI (rate of inflation), the bottom finds out what ratio of the total inflation that difference represents.

3. Simplify the problem through an order of operations. Solve for the difference in price, then divide it. Multiply the outcome by 100 to get a percentage. Here, the inflation rate is 11.4%

4. Know how to read inflation. This percentage means that, in current time, your money is worth about 11.4% less in today’s dollars than they were in 2010. In other words, most products cost on average, 11.4% more than they did in 2010. If the answer is a negative number then it is deflation, where a scarcity of cash makes money more valuable, not less, over time. Use the formula just as in case of a positive figure.

Also read: The Best Ever Solution to Save Money for Salaried Employees

Most people complain about the fact that prices of the day-to-day products are increasing too fast. However, they ignore the part that their salaries are also increasing at a similar pace.

Moreover, a little inflation can be sometimes as dangerous as a high inflation. In other words, a modest inflation is always a good sign as it reflects the growing economy of the country. However, the problem arises when the inflation is rising too fast when compared to your wages.