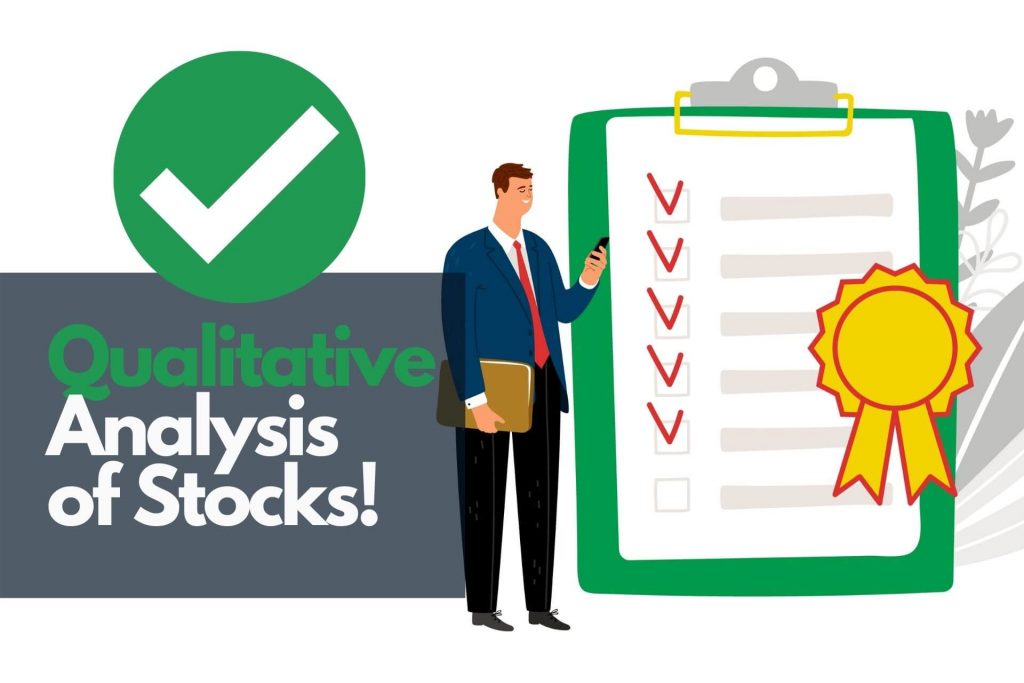 What is Qualitative Analysis of Stocks? And How to Perform it?

A Guide to Qualitative Analysis of Stocks for Beginners: When you think about analyzing a strong company, the first picture that comes to your mind is most probably about an individual with high aptitude locking himself in and crushing numbers all day long. Moreover, the numbers like Total Revenue, Operating, Profitability, Margin  Net Profit, etc might come in the notice. But is that all there is to investing?

What is a Qualitative Analysis of Stocks?

Qualitative analysis is the use of non-quantifiable information in order to judge the investment prospects of a company. This information includes quality of management, the satisfaction of various stakeholders, ethics, brand value, etc. This is also known as soft data. This soft data deals with factors that are intangible.

What we are accustomed to is known as quantitative analysis. Here the focus is on numbers, ratios derived from statements like the Income statement, balance sheet, and cash flow statement. The biggest factor of differentiation is that quantitative data can be crunched by artificial intelligence or simply put computers. Qualitative analysis on the other hand requires a human touch.

Why Qualitative analysis of Stocks Important?

Even though we might be sitting behind a computer screen and viewing a mixture of numbers that make up important company information. It is important to remember that ultimately it is people who run these companies and not numbers. It is humans who ultimately create and buy the services or products offered by the company. Hence it is not simply possible to only look at the company as a collection of numbers.

Take for example Coca Cola. The company manages to sell 1.8 billion bottles per day. If we just look at numbers like this the company could be the greatest to ever exist. But not many would have foreseen the consumer concerns changing to consider health prospects over

How to Perform Qualitative Analysis of Stocks?

Here are the aspects of a company form part of the qualitative analysis of stocks and what investors need to look for before investing:

It is very important to take into account who leads the company. These include CEO’s, Board of Directors, Chairmen, etc. If tomorrow a new CEO is being appointed analyzing if he is the right fit for the company goes a long way. One would always prefer someone who is already experienced in successfully running a company in the industry over an individual who is new to the industry.

Further background checks would include assessing their education, management style, etc. For eg., a CEO who does not believe in automation or further innovation could be a potential risk to the company.

However, it is also important to take these factors as conclusive evidence. Take for example if one were to judge Apple in its nascent stages by looking at Steve Jobs solely on the basis of educational qualification one would dismiss Apple as a potential opportunity. But Steve Jobs was a marketing genius second to none.

One can also judge the competence of the management team depending on how they react during a crisis. Take the example of Sony. In 2011 the company suffered a data breach of 77 million PlayStation users. Instead of trying to cover it up the CEO apologized personally and customers even were given a free subscription to PlayStation Plus and identity theft insurance.

Employee satisfaction is crucial as only then will their top services be carried forward to the customers. One of the means through which we can assess this is by observing the employee turnover ratios of the company. A company with a high turnover ratio could be a sign of an unhealthy or toxic work environment.

This is why companies often provide employees with the best amenities and a strong independent HR to look after their concerns.

It is also very important that the company also ensures that they treat their suppliers fairly. As a healthy relationship with suppliers goes a long way. One example could again be that of Amazon. The company cloned the tripod product of a small company using their platform.

They however did not stop by turning themselves into competitors they also banned the company from using the platform. News like this only puts companies in a negative light.

Every action that a company takes is in one way or the other geared towards customer satisfaction. We all have seen examples of how seriously even tweets on social media platforms are taken in order to protect the image of the company. Nobody wants to deal with a company that deals horribly with their customers.

As reported by Investopedia between 1994 and 2007 companies that please their customers are shown to create about four times the wealth.

There are numerous other factors that also play an important role in qualitative analysis. These include the competitive advantages of a company, patents it possesses, brand value, moats in its industry, etc.

Although these factors may not be exactly quantifiable they still form a very important role in the analysis of a company.

Whenever large investments or private equity groups invest in a company, they do so after taking into account all the quantitative and qualitative factors. This means that they have already done their research. Hence companies having large institutional investors is a positive sign.

How to do Fundamental Analysis on Stocks?

The information needed for quantitative analysis however is hard to come by. When it comes to numbers computers can be programmed to deliver results or analysis in a fraction of seconds. Qualitative analysis of stocks on the other hand hard and time-consuming to analyze.

Another factor is analyzing what information is relevant and what isn’t. Some sources include company websites, business publications, annual reports, shareholder meetings, etc. A well-rounded analysis is no easy task but is only complete when both quantitative and qualitative factors are considered. Let us know about your experience in the qualitative analysis below in the comments. Happy Investing!