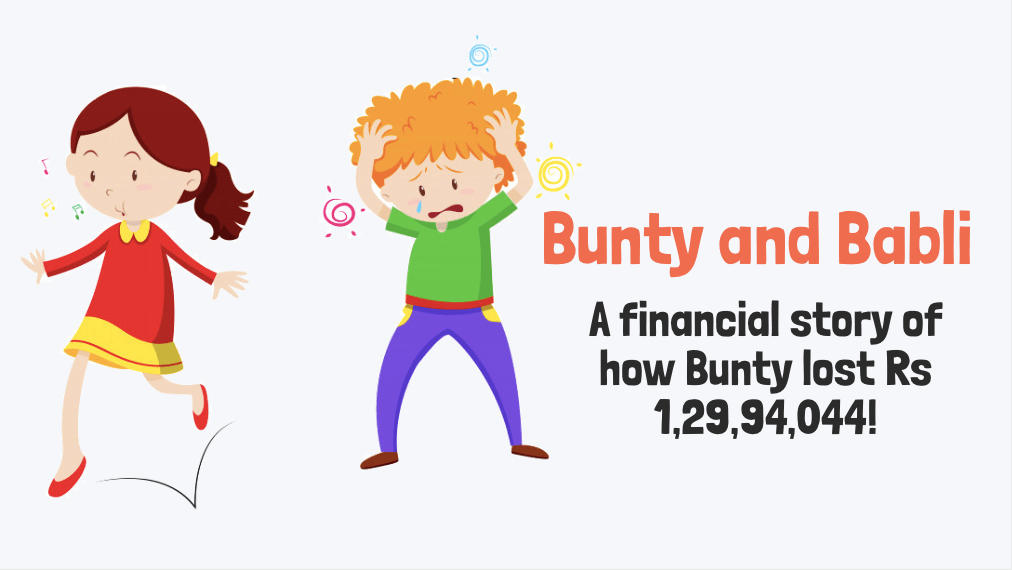 Once upon a time, there lived two best friends- Bunty and Babli. Both were born in the same year, the same city, attended the same school and went to the same college. However, things changed when they started working.

Bunty was an impatient type guy who wanted to live his life king size and did care about his savings or future. He enjoyed spending every penny that he earned in different fancy things. On the other hand, Babli was patient and goal-oriented who cared for a secured long-term future.

And that’s why Babli begin investing at an age of 25 when she started getting her first paycheck. As she also enjoyed living a comfortable life, therefore, she only invested a small amount of Rs 3,000 per month in equities (stocks and mutual funds) with an expected return rate of 14% per annum. She advised Bunty to follow the same approach, but he ignored her saying that “what difference an investment of Rs 3,000 per month can make in our lives? I’ll start investing heavily when I have got a big amount to invest.”

When they both turned 40, Babli had built a corpus of Rs 18,28,561 on her portfolio. Realizing his mistake, Bunty decided to start investing from that year with double the amount invested by Babli i.e. Rs 6,000 per month to catch up with Babli. However, because of different responsibilities like Kid’s education, house loan etc, Babli couldn’t increase her investment amount. She continued the monthly investment of same Rs 3,000 per month.

Both Bunty and Babli continued earning an equal return of 14% on their investment in equities.

At 55, Babli retired and moved to live in a beach house. On the other hand. Bunty continued to work for the next few more years to save more money and later moved in with his children.

This is the power of compounding, my friend.

Babli started investing 15 years sooner than Bunty, and over those 15 years, her money started to compound. As a matter of fact, Bunty has to continue to work 10 more years to make the same corpus as that of Babli (assuming that Babli stopped investing at 55 and took out all her money).

Quick Note: If you’re a beginner and want to learn how to invest in mutual funds the right way, check out this online course.

The sooner you start investing the better off you will be. Time is on your side so take advantage of it. Even by investing Rs 3,000 per month (just like Babli) you can reap big rewards in future.

Finally, here’s a famous quote by Albert Einstein regarding Power of compounding–

“Compound interest is the eighth wonder of the world. He who understands it, earns it … he who doesn’t … pays it.”