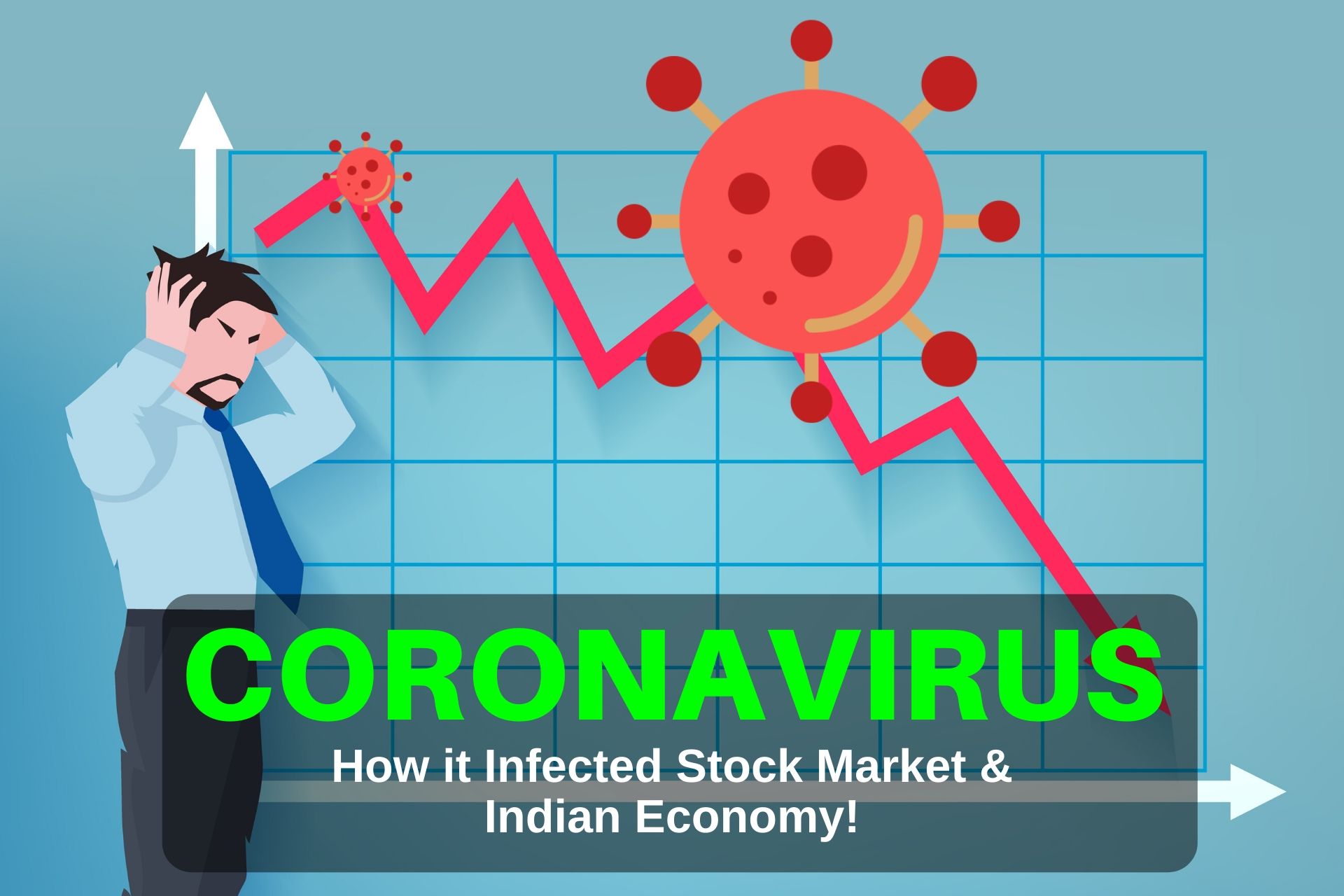 Impact of Coronavirus on Stock market and Indian Economy: The Indian stock markets have been in turmoil over the past few months due to slow economic growth. The market was only recovering with government taking some major initiatives like rate cut in corporate tax, infusing money in the economy, disinvestments, lowering repo-rate, etc., until another crisis hit a new wave of major economic slowdown pushing the indices (SENSEX and NIFTY) to their decades low.

In this article, we’ll discuss what exactly is ‘Coronavirus’ crisis and what are the impacts of coronavirus on stock market & Indian economy. Let’s get started.

What is the ‘Coronavirus’ crisis?

COVID-19 a pandemic most commonly known as ‘Coronavirus’, which started in China has now breached the international borders and has spread to nations across the globe. Among the infected nations some of the major economies that are facing severe damages are South Korea, Iran, Japan, Italy and now India has been added to the list.

The nations are not only facing a loss of life or an exponential increase in the number of infected individuals, but the economic growth has also been dented by this pandemic. 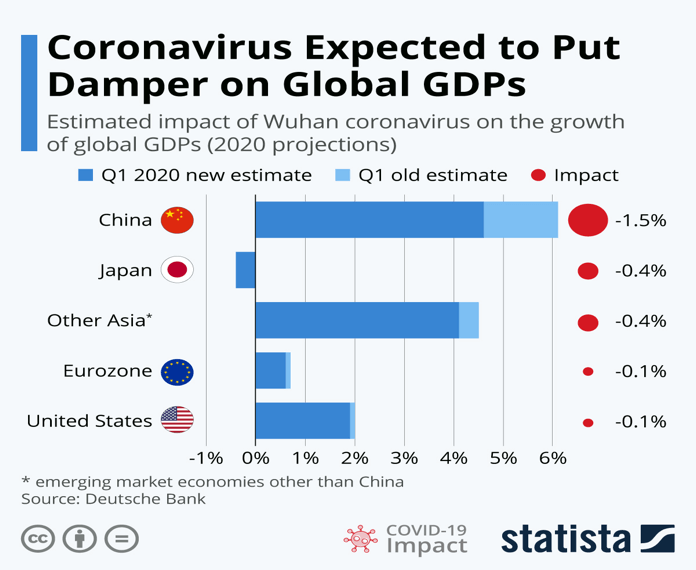 The global economy is facing a rough time due to the outbreak of the ‘Coronavirus’, which started in China. ‘China’ is the worlds’ largest manufacturing hub and one of the largest exporters of goods. China accounts for almost 16% of global exports.

Being the epicenter of the virus the economic activities in China contracted as the health emergency called for shut down of offices, factories, schools, etc. This contraction had a dominos effect on the economies across the globe as a majority of ‘supply chains’ globally are sourced from China.

How is the exposure of ‘Coronavirus’ impacting the Indian Economy?

India is China’s second-largest trade partner making the trading roots even deeper and hence the impact on Indian markets is huge. India happens to be a net-importer from China. India’s merchandise import from China accounts for almost 18% of its total imports from around the world, while the exports account for almost 9% of the total exports around the world, as of CY2019.

Due to the economic activity contraction in China, industries and companies directly related to imports and exports from and to China are facing a crisis. Some of the major sectors affected in India are-

Market discounts information on a real-time basis, thus the aftereffect of the virus outbreak on the Chinese economy and on the above-listed industries and sectors can be seen evidently as the stock prices of related companies and sectoral indices fell in the past one week. Negative investor sentiment can be directly witnessed with the market breaking down to new lows with every passing day.

Further, the sectors and commodities, which are indirectly connected to the above-listed industries, will have a subsequent impact like the Oil prices falling, etc.

The weight of the above-listed Industries in the contribution of India’s GDP growth is high thereby affecting the economy at large.

The performance of Q4FY20 is still in question as many sectors like ‘Pharma’, sourcing supply chains from China have already stocked their inventories for almost 2-3 months absorbing the losses that could have occurred due to shortage of raw material supply. While on the other hand, the electronics market might take a major hit due to the shortfall of supply. Some of the top mobile phone companies like ‘Apple’, ‘One Plus’, ‘Xiaomi’ etc. have there manufacturing hubs in China, additionally among the top mobile phone companies majority are Chinese brands.

The uncertainty isn’t much as one can easily do the math of India’s dependency on China. Hence the answer is crystal clear. What needs to be addressed is to what extent can Indian economy be damaged and what will be the governments’ contingent plan to the bailout the Indian economy.

Though it is too soon to say the measure of impact, as Q4FY20 numbers are yet to come out.

Is the falling Chinese Economy a Silver Lining for India?

India has been running its own race to achieve a target of becoming a $5 Trillion economy. The economy has been thriving with the government taking some important measures to make India self-sufficient and attractive for foreign investors.

China is a world manufacturing hub and a net-export country. The dependency of the world economy on China is too high and hence, concluding that the current economic contraction in China is an opportunity for India is too soon and illusionary. Further, the manufacturing capacity in India is far too less than China and cannot be sufficient for an instant shift. A business shift takes immense time due to strategy and cost-effectiveness. Thus India might be a good substitute for China, but in order to replace China, it has a long way to go.

Future Outlook on the Dalal-Street 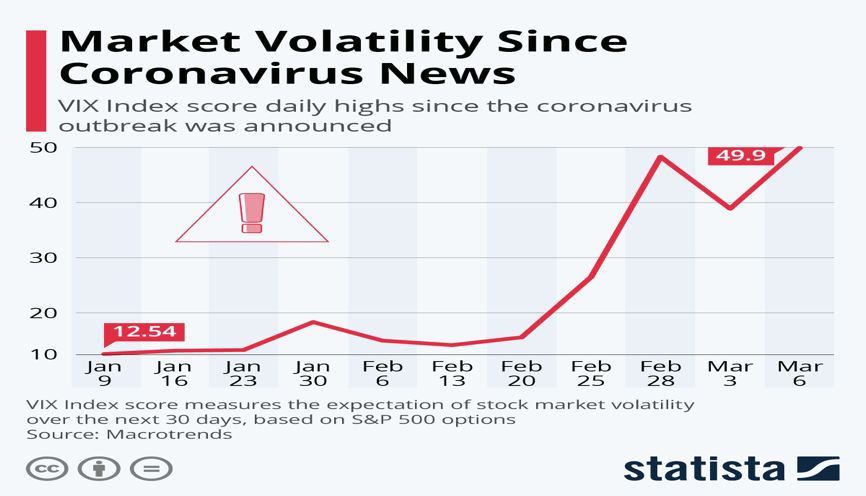 The root cause of the falling stock prices and indices is the uncontrollably spreading ‘Coronavirus’. The cure for the virus has not been found yet and the number of infected individuals has been increasing with every passing day.

The investors have become so pessimistic about the future outlook of the Indian economy, that pulling out money from investments looks much safer and promising to avoid further after-effects of the virus on the industries and economy.

The fall will continue until the virus is not controlled and continues to spread contagiously affecting the economies. Some positive outlook on the vaccination or control of this pandemic seems to be the only solution that can rest the fear of the investors.