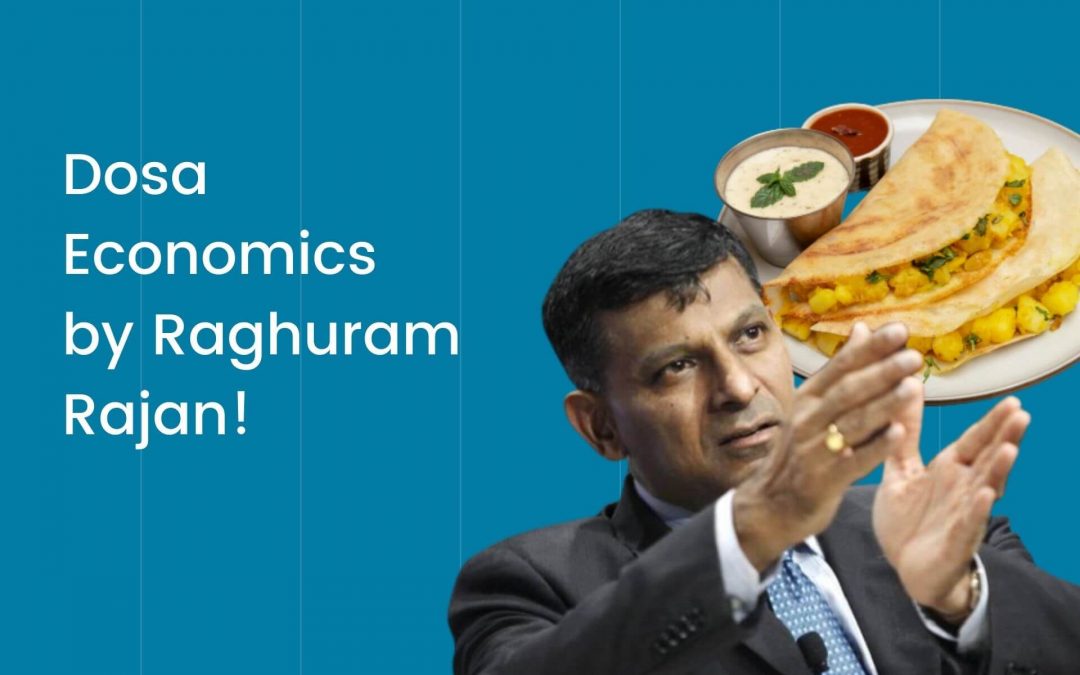 Understanding what is Dosa Economics: In contrast to most bland economic theories, Dosa Economics remains the only one that makes our mouths water every time we discuss it. Unfortunately for us, the theory has very little to do with us eating dosas immediately.

The term was coined by the ex RBI governor Raghuram Rajan in 2016 to simplify the effects of inflation on an individual’s purchasing power. Keep reading to find out!!!

What is Dosa Economics or Dosanomics?

Former RBI governor Raghuram Rajan served during a challenging time when the interest rates offered by banks were high but at the same time, the inflation rate was high too. Although quite a few of his decisions were unpopular, looking back they served in the best interests of the economy and curbing the rise of inflation.

One of his decision which received a lot of flak was reducing interest rates on fixed deposits from 10% to 8% when the inflation fell to 5%.

This decision received criticism from many citizens as FDs are still a popular investment option throughout the country. In addition to this, it is a part of many senior citizens sources of income or only source of income. When questioned as to why he took such a decision he explained using something called dosanomics.

The concept of Dosa economics states that high interest rates during high inflation do not benefit the investors as much as low-interest rates during low inflation. The theory explains the effect of inflation on the purchasing power of a person. Let us understand this better with a similar example to that given by Raghuram Rajan.

Take the example of a senior citizen who earns incomes only through interests on fixed deposits(FD). In a situation where the interest rate offered by banks is set at 10% and the inflation rate stands at 10%. If the senior citizen invests Rs. 1 lakh in FD he would receive a return of Rs. 10,000 at the end of the year.

As many Indians, let’s assume that the senior citizen loves having dosa and plans to use this only for that purpose. In the above scenario, masala-dosa is priced at Rs. 60. Here the senior citizen will be able to buy 1666 masala dosas immediately. But if he waits for the end of the year he may have more money in hand considering the interest received on the fixed deposit.

Now say he waits till the end of the year he would have received Rs, 110,000. But at the same time thanks to inflation the prices of masala dosa also would have increased to Rs. 66, Considering this the senior citizen would still be able to buy only 1,666 dosas. Coming back to the theory, is there any benefit to the senior citizen?

Absolutely not as he is buying the same number of dosas in a high-interest high inflation scenario.

Dosa and Senior Citizen: When the rates are reduced

Now, let’s take a situation where the interest rates offered by banks is 8% and the inflation stands 5%. Here again, if the senior citizen buys masala dosas immediately he will receive 1666 dosas. But if he waits till the end of the year he will have Rs. 108,000 and the masala dosa will be priced at Rs. 63.

At the end of the year, he will now be able to buy 1714 masala dosas. This shows that lower interests benefit the person when the inflation rates are under control and low. Adding testament to this theory Rajan has also stated that he is yet to meet an industrialist that doesn’t want the rates to be lowered.

Generally, as investors when it comes to investing the most important factor we look at is the returns. But we may fail to notice other important factors which are also at play. Similarly here too the theory explains how inflation could be a silent killer if not considered as it reduces purchasing power.

Hopefully, through this article, you were able to understand the concept of What is Dosa economics by Raghuram Rajan. Let us know if you have any queries in the comments below. Have a Dosa and Happy Reading!