3 Financial Signs That A Company is Declining 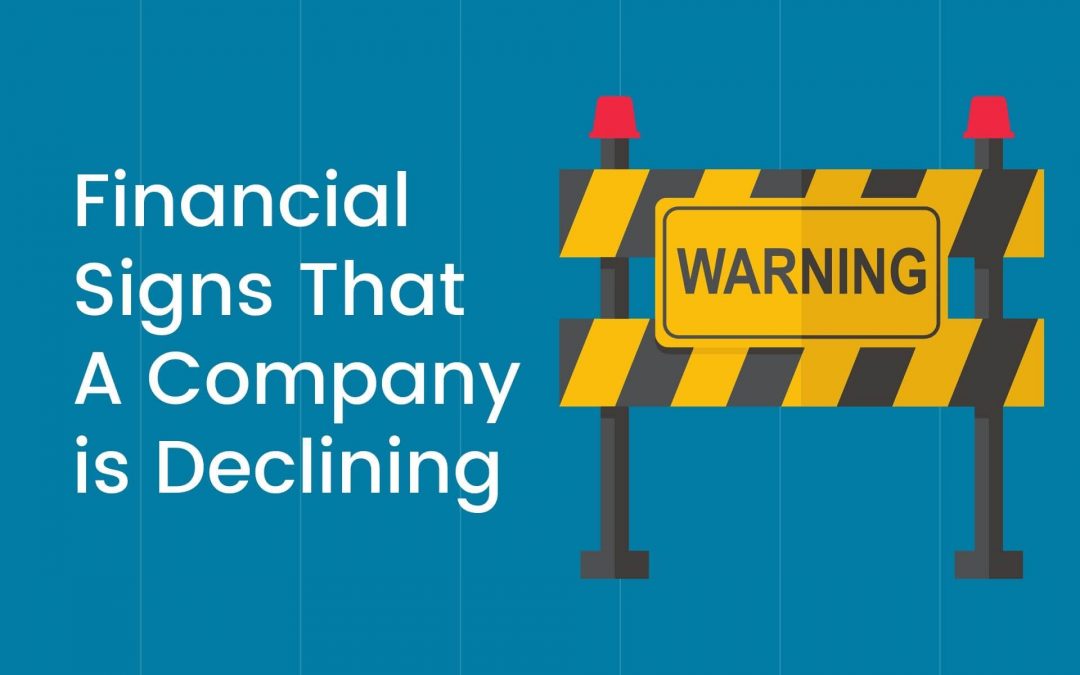 Financial Signs That A Company is Declining: Do you know that out of the 30 companies in the constituents of Sensex in 1992, only seven are still part of it? Yes, that’s true. The remaining companies couldn’t maintain their growth & value and hence were thrown out of the list of the biggest thirty companies in India with time.

Although becoming a large-cap company is a dream of most businesses, however, after becoming a mature company, many companies find it a little challenging to maintain their growth.

Moreover, the problem arises when they are not able to sustain their profitability and starts declining. There are a number of examples of companies that were once a market leader, however, couldn’t keep a sustainable profit margin and later either shut down or went bankrupt. The most common example is Kingfisher.

Declining companies do not have much growth potential left and even the returns (and value) of their existing assets keep on sinking. Therefore, as investors, it’s really important for us to continuously monitor the growth of our invested company. And if we are able to find some signals that the company is declining, it might be the time for exit from them.

After all, no matter how much we love our invested company, the main goal of our investments is to make money and if the company is continuously declining, there’s no point remaining invested. It’s really difficult for the declining companies to reward their shareholders. Further, we as investors have thousands of other options available to invest in the market. Then, why stick with the declining companies?

In this post, we are going to discuss three clear signals that you can study from the financial statements which show that a company may be declining. Besides, these financial signs that a company is declining are very simple to identify (even for beginners). Therefore, make sure that you read this post till the very end. Let’s get started.

QUICK READ – Valuation Basics: What is the Time Value of Money (TVM)?

3 Financial Signs That A Company is Declining

Although evaluating the exact financial health of a company requires a serious study of the statements of profit & loss, balance sheet and cash flow statement of the company. However, there are a few financial tools that send an easy signal for investors to identify declining companies. If all these three financial signals are negative for a company, then the company might be in a little trouble.

Here are the three simple financial signals that you can study to evaluate if a company is declining:

If a company’s revenue is continuously declining for the past multiple years, it may be a warning sign for the investors. The revenue of a company is the TOP LINE of the income statement. And if the TOPLINE is declining, in general, all the lower levels will follow the same trend.

Even a stagnant (flat) revenue for a continued longer period of time is a sign of caution for the investor. After all, there’s a fixed extent up to which a company can control its expense. And if the company want to increase its profit, then it has to increase its revenue eventually.

A flat or declining revenue for the past multiple years is an indicator of operating weakness. Moreover, if you can find that the revenue of the competitors (and the industry) is growing over the same period, then it sends even a stronger signal of weak management and poor health of the company.

For example- here is the income statement of Reliance communication for the last five years. Here, you can easily notice the declining net sales (and total revenue) for the past multiple years.

And this decline is in line with the stock return of this company. In the last five years, Reliance communication’s share price has shrunk by over 93%.

Profit margin is calculated by dividing the net profits by net sales realized over a given time period. It represents how much percentage of sales has turned into profits. In other words, the percentage figure indicates how many cents of profit the business has generated for each rupee of sale.

Declining companies generally lose their market share to their competitors. And in order to keep up their sales, they often have to either give bigger discounts or to cut their profits. Moreover, they also lose the pricing power which further leads to a fall in the margin.

Anyways, if you’ve already invested and now find that the profit margin of the company is continuously declining for the past multiple years, then it might be a signal that this company is declining.

Dividend payout is the ratio of the total amount of dividends paid out to shareholders relative to the net income of the company.

It can be calculated by dividing the dividend per share (DPS) by the earnings per share (EPS) of a company in a year. For example, if the DPS of a company for the current year is Rs 2 and its EPS is Rs 10, then the payout ratio is equal to 2/10 i.e. 20%.

If a company gives a consistent dividend to its shareholder, it is a healthy sign. However, the problem arises when the company starts paying a major portion of its net income as dividends. In such a scenario, the company is not retaining enough income for investment in its growth or future plans.

There should be a balance between rewarding shareholders and retaining income for its own growth. After all, if the company is not investing enough in itself, it will eventually become difficult for them to increase (or to maintain) their profitability in the future.

Declining companies generally pay out large dividends to their shareholders as they have very little need (or scope) of reinvestment. As a rule of thumb, a payout ratio greater than 70% for a company can be a warning sign for investors.

Other Financial Signs That a Company is Declining

Another financial tool that can give you a better picture of the financial situation of a company along with the above three financial indicators is the company’s debt level.

Even big mature companies are capable of declining over time and losing their value. And that’s why it is important for investors to continuously monitor the growth of their invested company.

In general, a flat or declining revenue, negative profit margin and huge dividend payout can be considered financial signs that a company is declining.

Anyhow, if the company takes necessary steps, it may recover back on track or even become a turn-around. However, if the management doesn’t take the significant steps in time, the company may decline further destroying the shareholder’s investment.

We hope you liked the article 3 Financial Signs That A Company is Declining and this has helped you in a way to stay away from such companies while investing. Comment down below and let us know if you have invested in such a company in the past.