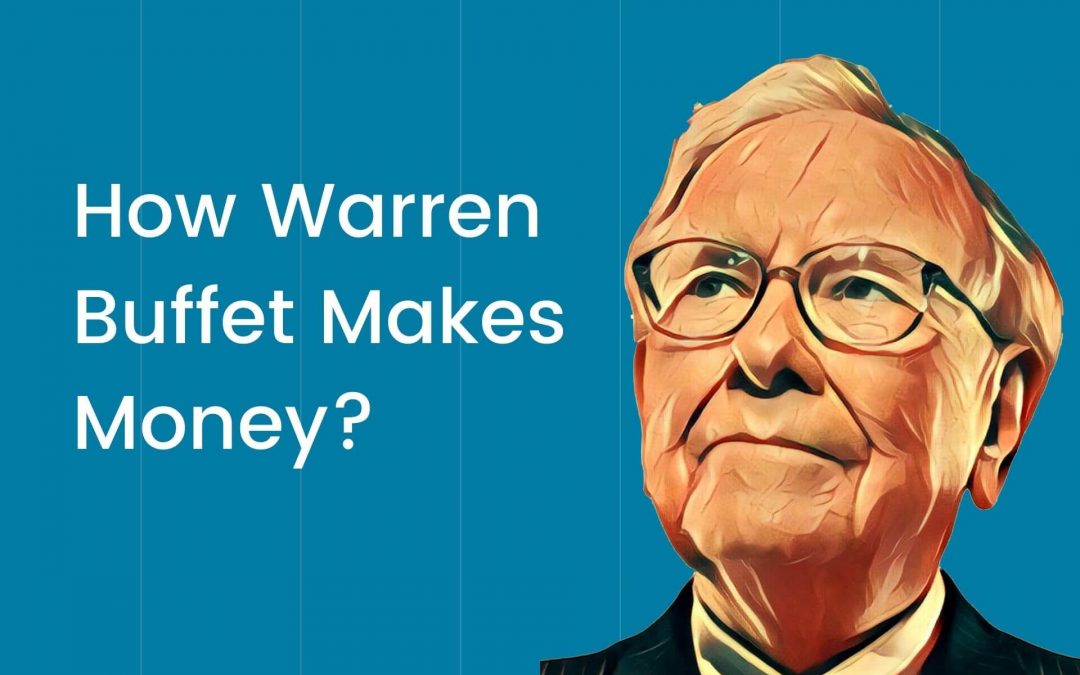 How Warren Buffett Makes Money: Oracle is the first word that comes to mind when one encounters the name “Warren Buffett”. The word oracle simple means someone who acts as a medium through whom the prophecy is sought from God.

And the investment strategy and advice from Warren Buffett surely is a prophecy and hence the title “Oracle of Omaha” sits well with him. In this article, we’ll look into how is Warren Buffett Rich and his strategies to make money from the stock market. Keep Reading.

Who is Warren Buffett?

If you haven’t heard this name, you are probably staying in some other world. One of the best investors to walk the face of the Earth. One of the richest person in the world. His Networth is estimated to be over $100 billion. He follows the simple strategy of Value Investing, which comes from the school of Benjamin Graham.

Warren Buffett was born in the year 1930, in Omaha. He started his career as a salesperson in 1950s and formed ‘Buffett Associates’ in 1956. He made his first million dollars in 1962. In 1965, he first invested in Berkshire Hathaway and by 1965, he had full control of Berkshire Hathaway.

The Famous Story of BKH Investor

A guy had bought 200 shares of Berkshire Hathaway in 1970s. Within a year’s time, the value of his investment doubled. He sold half his shares and started a restaurant which lasted for 20 years.

And the value of the other 100 shares today is $15 million. When asked, what does he do now?, he replied, “ Half the time I Ski, and the other half time, I regret selling those 100 shares”.

There are two routes or ways via which this Ace Investor makes money. Let us first discuss the most obvious ones:

The philosophy is very simple, invest in only those companies which have a lot of upside potential left in them and potentially give large returns on the money invested. He is a lover of reading the annual reports of the company and makes his analysis based on them.

And after being satisfied that the company meets the above criteria, he goes ahead and puts money in these companies. Some of his noteworthy investments of his include: Apple, Bank of America, American Express, Coca-Cola, Kraft Heinz, Verizon etc.

This investment strategy might come as a surprise to many (especially those who believe that warren Buffett only indulges only in long term investing), but little does one know that Berkshire Hathaway writes naked Put options worth millions of dollars.

Buffett’s company, Berkshire Hathaway also deals in Derivatives. As a matter of fact, in one of the annual reports, Buffett acknowledged that Berkshire Hathaway collected a premium of more than $7.5 bn by writing naked Put options.

What does Writing Put Options Imply?

Now, if upon expiry the share price of XYZ limited does not fall, then the premium which i received to write the Put option becomes my Income. So, the above strategy is followed by Berkshire Hathway. The only difference here is that they already have a long position in the shares of the company against which they are writing the Put options.

And they are willing to buy more if the share price comes down. But, if the share price does not fall, then the premium received improves the initial entry price of the shares. So, there is a dual benefit of writing Put options for Warren Buffett’s Berkshire Hathaway:

Warren buffett apart from being a generous philanthropist is also an individual with sharp investing and business acumen. At the ripe age of 91, he is still as active as ever. And this Oracle of Omaha has his sights on generating more value for his investors.

We hope you got some life lessons from this article “How Warren Buffett Makes Money”. Happy Learning and Money Making!!