ITC Vs Godfrey Phillips India – A Comparison of the Two Tobacco Giants! 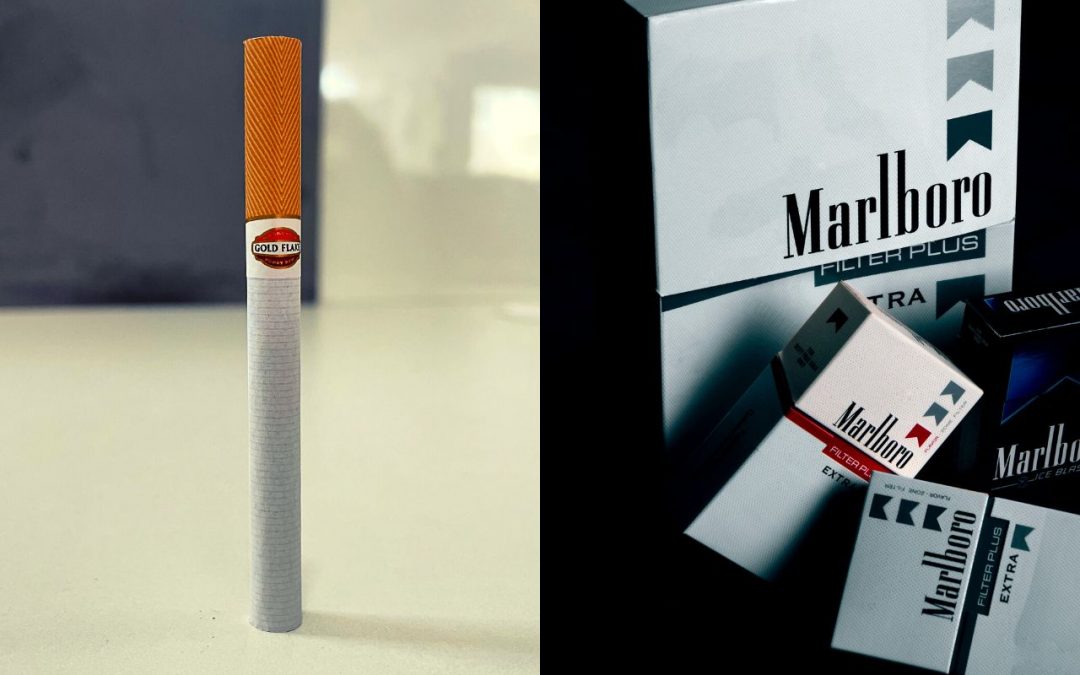 ITC vs Godfrey Phillips: Tobacco is Taboo in India for many reasons. It can lead to serious health issues if consumed excessively. But did you know India is also the second-largest producer of tobacco in the world with an annual production of around 800 million kgs?

To benefit from this highly profitable sector, a number of multinational companies have entered the business. In this article, we will take a look at ITC vs Godfrey Phillips and also go through their financials. Keep reading to find out!

The company was established in 1910 as a British-owned company and was named Imperial Tobacco Company of India Ltd. It was later renamed India Tobacco Company Limited (ITC Ltd.) in 1974.

ITC Ltd. is an Indian conglomerate company that has a diversified presence in FMCG, Hotels, Packaging, Paperboards & Specialty Papers, and Agri-Business.

ITC’s FMCG products reach over 150 million households in India with more than  6 million retail outlets. They export their products to more than 90 countries.

The agriculture business of the company has empowered over 4 million farmers.  ITC Hotels is one of India’s pre-eminent and fastest-growing hospitality chains with 107 hotel properties in over 70 locations.

GPI manufactures and sells cigarettes, smoking tobacco, and cigars, apart from having a non-tobacco line of products. Today it is the flagship company of Modi Enterprises.

The company has diversified into other businesses such as confectionery, tea, cosmetics, and retailing.

ITC has copyright and registered trademark ‘Flake’, which is one of their highest sellers. On the other hand, Godfrey Phillips had been selling cigarettes under the ‘Select’ trademark.

Everything was smooth sailing until 2020 when the two Tobacco giants were fighting a legal battle. It started when Godfrey decided to change its packaging and Labelling.

ITC filed an infringement case against Godfrey claiming that they have launched a ‘deceptively similar’ packaging by writing the brand name in red against a white backdrop – identical to the colour scheme of ITC’s ‘Flake Refined Taste’.

After multiple sessions, Justice BP Colabawalla granted interim relief to ITC by ruling against Godfrey as there was no valid reason for them to change its brand name and copy the colour similar to ITC.

The Gross sales value for ITC stood at Rs 74,979 Cr whereas, the Gross Sales value of Godfrey Phillips was Rs. 6,408 Crore in the fiscal year 2020-21. The revenue growth of both ITC and Godfrey Phillips (India) has been stagnant over the last 5 years.

ITC saw a decline of 0.26% in its revenue for FY21. Segment-wise, the revenue from its FMCG- others which include Staples, Convenience Foods, and Health & Hygiene products business grew by 15.8%.

Godfrey Phillips (India) saw an even worse decline of 12.74%. It can be attributed to the fact that the domestic cigarette volume declined by 19.8% during the year as factories remained shut and demand declined.

The gross profit margin shows the efficiency with which the company is able to produce or sell its products or services. From the trend, it is evident that ITC Ltd. has consistently maintained a higher margin than  Godfrey Phillips India Ltd.

ITC has maintained a higher 3 years average net profit margin of 27.08% compared to Godfrey Phillips, which has an average of 11.48%.

ITC vs Godfrey Phillips: How Much Are The Investors Earning?

The ROE for ITC is 21.97%. This means that ITC was able to generate an extra 20 paise for every rupee put into the company by investors.  Similarly,  Godfrey Phillips India Ltd. had an ROE of 15.81% in FY21.

ROCE can be used to evaluate how well the company is utilizing its capital to generate profits. The 3 years average ROCE of ITC is 31.79% and Godfrey Phillips has been able to maintain an average of 21.36%.

The Dividend Yield is a ratio that shows how much a company pays out in dividends each year relative to its stock price. While both the companies have an increasing trend in the dividend yield metric, ITC is ahead in the competition with 4.92% as against Godfrey Phillips with 2.63% in FY21.

ITC vs Godfrey Phillips: How Does The Valuation Of The Company Look?

The sectoral PE for both the companies is 15.6. Compared to this ITC is slightly overvalued as it has a ratio of 20.43. On the other hand, Godfrey Phillips has a ratio of 12.6 which is lower than the average.

The P/B ratio is one of the commonly used ratios to find undervalued companies. Godfrey Phillips had a P/B ratio of 1.84 in FY21 while ITC Ltd. has a higher ratio of 4.59.

ITC has a higher EV/EBITDA value of 13.45 compared to Godfrey Phillips with 7.23.

Godfrey Phillips vs ITC: Future Prospects Of The Company

ITC Ltd: With its presence in many sectors, ITC is in the process to forge new strategic partnerships to gain market leadership.

Along with that, the company is focused on deploying innovative delivery models and enhanced usage of digital technologies for efficient market servicing.

Godfrey Phillips India Ltd: The ongoing COVID-19 pandemic has adversely impacted the business operating environment and has led to a slowdown in economic activity.

The company is proactively taking all possible steps to accelerate the recovery process and to get back to pre-Covid business levels. It has plans to launch new products to strengthen its core business of tobacco.

Further, the company aims to penetrate deeper into key geographies and expand its distribution footprint through increased digitalization.

In this article, we looked at the financial metrics of ITC vs  Godfrey Phillips. Both the companies are giving neck-to-neck competition to each other in terms of growth and profitability.

ITC Ltd. is a bigger company in terms of market capitalization with a value of Rs 265,924 Cr while Godfrey Phillips Ltd. has a value of Rs 5,347 Cr.

However, the future leadership rests with the policies and strategies that will be adopted by them. That’s all for the post. Happy Investing!

Have you invested in either of the companies? Let us know in the comments below.