What is Porter’s Diamond Model of National Advantage?

Porter’s Diamond Model has been the exemplary work of Michael Porter, who first published about this economic model in his book, “The Competitive Advantage of Nations” (1990). This simple but effective model aims at explaining the cause behind the reason as to why one nation tends to be more competitive than other nations in relation to a particular industry. This book also tries to look into the matter of innovations in businesses that may be more conducive to one nation and might not be possible in others.

Porter’s Diamond Model, also known as the Theory of National Advantage, is used by different economic institutions to calculate the external competitive environment. This analysis helps in giving us an understanding of the relative strength of one business than the other. On analyzing the external environment, the causes for industrial advantages for some businesses in a particular place or region can also be deciphered. In simpler terms, the Porter’s Diamond Model attempts to answer the following basic questions:

In Porter’s model, this nation is referred to as evolving into a home base. Some examples that we can illustrate are that of ‘China’, being the home for the production of cellphones, Germany as being the home base for car manufacturing, etc.

The answers to the above – mentioned questions lie in the determinants identified by Porter that generates a competitive advantage as mentioned above. The four determinants enumerated in Porter’s Diamond Model are as follows: 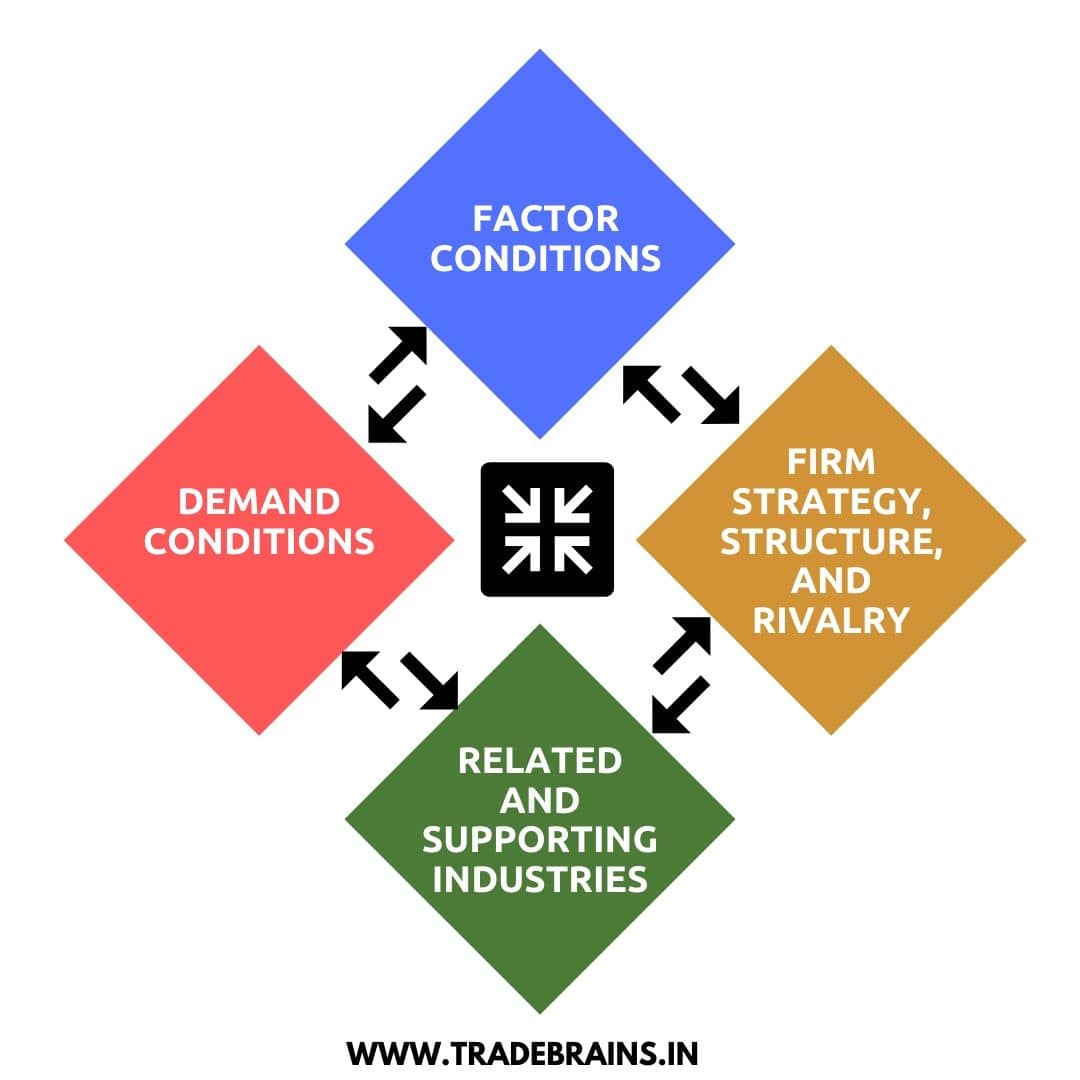 Factor conditions relate to the different types of resources that are present or absent within a nation. Resources can be typed into basic and advanced ones. The basic ones include useful natural resources and the availability of unskilled labor. Advanced or ‘created’ resources include specialization and skilled knowledge and expertise, availability of capital, infrastructure, etc.

For Porter, natural resources are of less important as compared to the created resources. Competitive advantage develops in nations and in particular industries that are able to create these advanced and specialized factors.

Demand conditions invariably talk about the ‘home demand’ which affects how successful a particular industry within a certain nation is. A strong home demand of industries in their own nations creates a large market for them and therefore, creates opportunities for them to grow.

According to Porter, the level of success of one industry can be related to the success of related and supporting industries. In the present economies, the role of ‘suppliers’ is a crucial one. These suppliers help in advancing innovation processes through shared resources- technical and other types of aids.

In recent times, the booming of startups has stimulated the renovation. These startups have entered into innumerable mergers with various industrial giants leading to the creation of competitive advantage.

The internal environment in which a firm is established determines how firms are created and structured. This structuring of the firm can be influenced by a number of factors- political, economic, and social. This structuring will form the basis of creating a strategy towards the establishment of the firm.

Also read: Porter’s Five Forces of Competitive Analysis – What You Need to Know?

Apart from the above four major determinants, two other determinants can be mentioned as having an influence on the creation of a competitive advantage in a particular nation. These two determinants are: 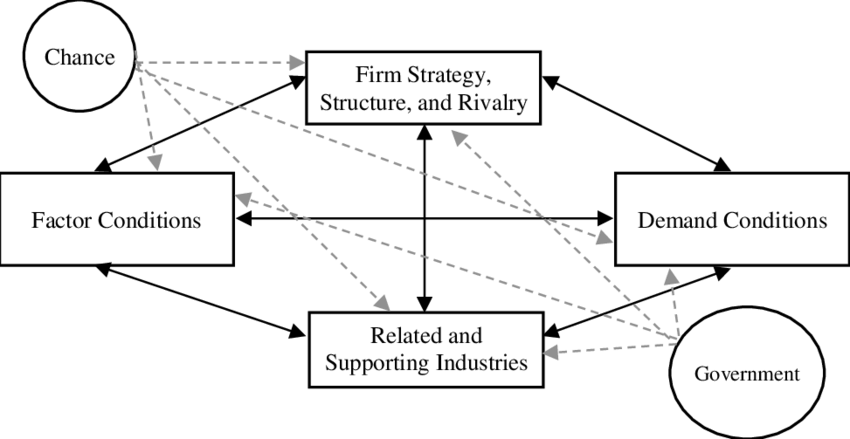 The government plays a vital role in the success of a firm or company. It is the government that provides for technical and financial aid to companies for its growth. The government has been referred to as ‘a catalyst and challenger’.

Porter believes that the market is not meant to be in the ‘invisible hands’ but the government should regulate it in order to stimulate the creation of advanced factors and therefore, leading to the development of competitive advantage. Government policies, investment in infrastructure, funding, etc. are some ways in which governments help in intensifying home demands.

The role of chance has not been originally discussed by Porter but it has been included in the Diamond Model as there may emerge random events like some scientific breakthrough, natural disasters or wars that might affect the established competitive positions in the society.

To sum up, the above mentioned six determinants in the national context- factor conditions; demand conditions; related and supporting industries; firm strategy, structure, and rivalry; government; and chances, can accelerate or deaccelerate the rate of success of a certain firm of a particular industry in a particular nation.

This success can lead to the generation of home demand which in turn results in increasing competitiveness in the global market and therefore, creates a competitive advantage for a certain firm.

Discrediting Porter’s Diamond Model will not justify his contribution but we cannot ignore the criticisms his theory of competitive advantage has drawn upon.

Some critics have pointed out that the list of internal determinants is limited in nature as there can be many other factors that can be listed. In other arguments, it has been noted that the inclusion of external factors has been avoided. The main focus has been more on the domestic picture and less on the global level.

Some writers have even highlighted that this Diamond Theory is not universal in nature but rather limited as it has been based on the study of only ten developed nations. Therefore, it would not be an exaggeration to pinpoint that Porter’s Diamond Model mostly applies to the researched developed countries.

Lastly, drawbacks relating to the sole application of the model on material products and not on services have been pointed out. The model fails to examine how this model will apply to the service sector of the economy.