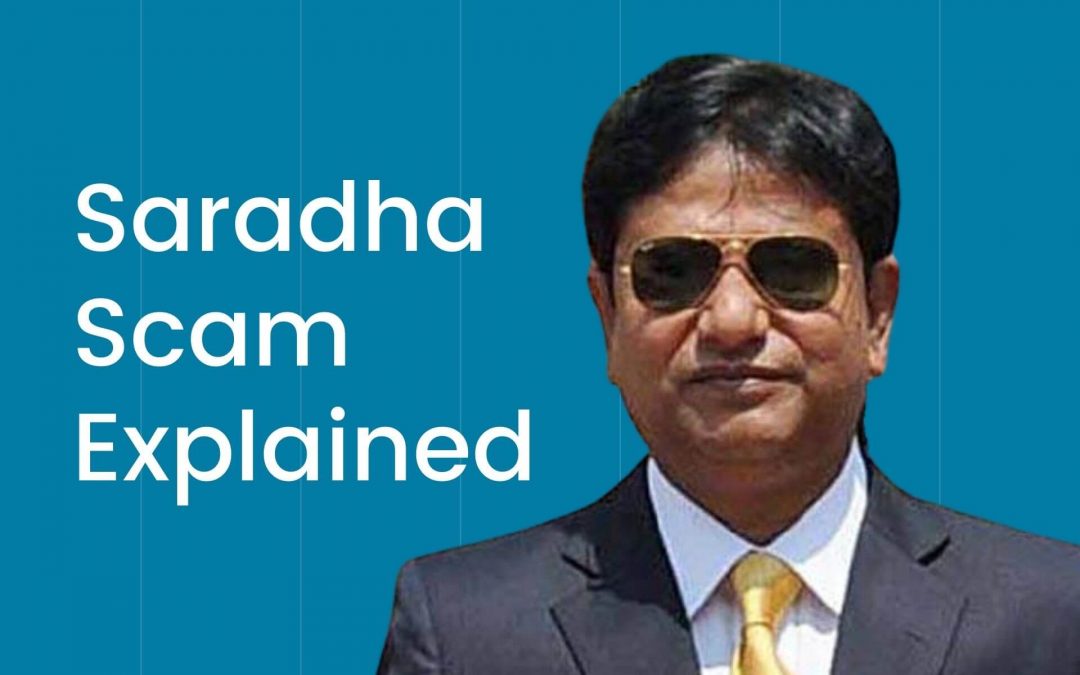 Saradha Scam Case Study: Since the news of India’s biggest chit fund scam first broke out over 200 agents, depositors and executives have committed suicide. This is because those associated with Saradha belonged to the low-income strata. This meant that all their life savings were gone, they found suicide as the only way out.

The Saradha group had collected US$ 4-6 billion from over 1.7 million depositors before it collapsed in 2013. Today the scam has come to be popularly known as ‘Bonzi’ a combination of Ponzi and Bengal.

The majority of the population in India belongs to the low-income category and live in rural areas. When it comes to money they face two major problems the first being a safe place to deposit their funds. The second being a just source for loans.

Sudipto Sen recognized these problems and decided to solve the first through means of a chit fund. This was basically a Ponzi scheme in the guise of a chit fund. The government, however, has tried to combat these issues by introducing a small savings scheme.

These schemes were operated in postal savings banks through post offices. The government, nonetheless, still fails to compete with chit funds as they offer up to 50% returns. An investor would realize that these chit funds were less secure but Sen addressed this by adding a sprinkle of religion. He named the group Saradha.

Sarada Devi was the wife and spiritual partner of Ramakrishna Paranchamsa one of Bengals greatest mystics. His name commands respect among millions even today. Sen recruited agents from local rural communities who were tasked with selling the funds. In return, the agents received a commission that amounted to 25-40% of the deposits. This was apart from other lucrative gifts.

An aura of security, astronomical returns, and an army of motivated agents almost seemed like a magical formula Sen had figured out for success. Soon the Saradha group was able to expand outside Bengal to other states like Odisha, Assam, Tripura, Jharkhand, and Chattisgarh.

The Scam worked in the form of a Ponzi scheme where one investor’s principal and interest were paid off from new investors. A Ponzi scheme collapses when investors stop coming in.

Investors of Saradha were rarely told about the true nature of their investments. They were simply lured by being told that they would get high returns after a fixed period. In order for the scam to last it would have to keep getting a higher number of investors on a regular basis. Sen invested the money in venues that would further the marketing efforts of the Saradha brand. This included several celebrities and political endorsements.

With enormous funds at their disposal, he invested in the Bengal film industry. They recruited stars and TMC MP’s like Satabdi Roy and Mithun Chakraborty as brand ambassadors for the Saradha Groups media platforms. He also recruited TMC MP Kunal Ghosh as CEO of the media group.

(Fig. Messi playing in Bengal in a match organized by Saradha)

To further its reach the group also sponsored popular football clubs in Bengal. This included rivals Mohun Bagan AC and East Bengal FC. Cash was also given to the club owners to fund teams and hire footballers from Africa and other parts of Asia. This also included organizing a football match involving the Argentine Superstar Lionel Messi.

The group was also able to operate for so long because they had paid large sums of money to several politicians. In an effort to prevent investors from raising alarms against the investment programs Saradha employed wives of local police officers.

Although Saradha had disguised itself initially as a chit fund they began by issuing debentures and redeemable preferential bonds to the public. This was done in violation of the SEBI rules that companies raising capital from more than 50 people without issuing a prospectus and Balance Sheet.

This led to SBI finally catching up with Saradha in 2009. Saradha then created up to 239 companies in an effort to mislead SEBI through its complex corporate structure.

A year later SEBI again caught up with Saradha. This time the group reacted by classifying itself as a collective investment scheme. In order to achieve this, the group began operating with tourism packages forward travel and hotel booking, timeshare credit transfer, real estate, infrastructure finance.

The group claimed that it was taking deposits from investors as advances for exotic holidays. At the same time, it gave them the option to cancel the booking at the last moment which would give the investors returns of 12-14%. Saradha would lure investors through these schemes with agents encouraging them to cancel and reinvest again in other schemes.

In order to create a front for their activities, Saradha purchased indebted companies. One such example is its purchase of Global Automobiles in 2011.

Global Automobiles was a heavily indebted motorcycle company. As soon as the purchase was made Global immediately stopped production but still kept 150 workers on the payroll. They were instructed to pretend to work whenever prospective depositors of Saradha would arrive for the inspection.

Other companies included Awadhoot Agro Pvt Ltd, Landmark Cement. These were purchased to show that Sharadha had diversifying interests. In order to further their political clout, the group donated motorcycles to the Kolkata Police. The group also persuaded Mamata Banerjee to use its Ambulances in Naxal hit areas like the Jangalmahal area of West Midnapore.

In 2011 SEBI warned the state government of Saradha’s activities but despite this, it did not comply. According to the Serious Fraud Investigation Office (SFIO), the Saradha group had offered returns as high as 100% in order to lure depositors from Villagers of Bengal.

Now that we look back despite Saradha’s efforts to silence policemen and politicians there were a few instances where it seemed as though the news of the scam would be broken out. These came from MPs Somendra Nath Mitra and Abu Hasem Khan Choudhury and TMC leader Sadhan Pande.

On March 14, 2013, Sachin Pilot took up the issue of Saradha Group’s involvement in a Ponzi scheme at the Lok Sabha. But unfortunately, this was already too late. This was because the groups’ outflows were eventually higher than the inflows in December 2013.

This was bound to happen in a Ponzi scheme. Sudipto Sen was now finding it difficult to calm his depositors and agents who were demanding their investments.

(Fig: Letter sent by Sen to the CBI)

On 6th April 2013, Sen wrote an 18-page confession to the CBI and then absconded. In the post, Sen mentioned the involvement of several TMC politicians which also included Mamata Banerjee. A Times of India report quoted that it seemed as though Dakshin Barasat was hit by a cyclone.

The police began filing FIRs against Saradha Group. Over the weeks to come several officials and properties of Saradha were arrested and seized. On 22nd April, Mamata Banerjee announced a four-member judicial inquiry commission to probe the scam. She is also quoted to have said “ “ja gechhey ta gechhey” (whatever has gone has gone).

She also went on to create a $70 million relief fund for low-income depositors. The government introduced a 10% additional tax on tobacco products. Bannerjee is reported to also have made controversial statements where she asked smokers to “ light up a little more”.

Other states like Assam and Tripura handed over the cases to the CBI in May 2013 itself. By April 2014, the SIT had filed around 385 FIRs against the group. Later in 2014, the case was finally transferred to the CBI on instructions from the supreme court.

Investigations soon revealed that the majority of politicians in the Saradha Scam were from the Trinamool Congress. Possibilities have also risen over the center being involved in the scam. A charge sheet has been filed against Nalini Chidambaram(wife of P. Chidambaram – former finance minister ), for allegedly accepting a bribe of Rs 1.4 crore.

Sen also confessed to money laundering as he had sent money to Dubai, South Africa, and Singapore for his purpose. TMC politicians included MP Kunal Ghosh, MP Srinjoy Bose, Transport Minister Madan Mitra who drew salaries as employees of the group. They also publicly encouraged people to invest their savings with it.

Soon Mamata Banerjee too found herself in hot water as Sudipto Sen had reportedly spent US$260,000 to buy paintings made by her. Post this the government had issued a notification that public libraries should buy and display Saradha Group newspapers. Other beneficiaries also included politicians outside West Bengal like Himanta Biswa Sarma, the Health and Education Minister of Assam.

As the scam further unraveled the CBI found several irregularities in SIT’s investigation. Sen had confessed to handing over cellphones, a laptop, a pen-drive, and a red book when he was arrested in Jammu & Kashmir. This contained evidence of his links with several political personalities. These were never transferred to the CBI.

The CBI summoned  Rajeev Kumar and his colleagues for investigation. Despite summons being sent to members of the SIT on 18 occasions since September 2017, no one turned up for questioning. The SIT officials gave reasons for ill health or personal engagements in order to stay away.

When the CBI tried to approach Kumar at his residence in Kolkata, the CBI team was allegedly roughed up and detained for a few hours by the police. This led to the Supreme court ordering an interrogation of Rajeev Kumar at a location outside West Bengal. This was done in order to avoid further clashes.

The interrogation was finally held in Shilong. Rajeev Kumar arrived in the state capital with three more West Bengal cadre IPS officers and his younger brother. During this, the Bengal Chief Minister Mamata Banerjee staged a three-day protest against CBI’s move in a bid to ‘Save Democracy’.

Post this Kumar was given a new job. He was appointed as the Chief Secretary of Bengals Information Technology Department, a post that is not meant for IPS officers. Mamata Banerjee made sure that no speculation on this matter made the local news headlines.

Sudipto Sen has over 98 cases pending against him and has already spent over 7 years in jail for Saradha Scam. He has even confessed to being guilty but there are no signs on which way the case against him is currently moving.

Sen is trying to face the cases as soon as possible as he knows that even if he is sentenced he will receive a maximum of 7 years in prison which he has already spent in jail. As the case keeps going he, unfortunately, does not have the Rs. 1.2 crore that he would require for bail as all his assets have been seized by the CBI.

The CBI officials have realized that the investments made by Saradha are lost but are still trying to recover money sent abroad through hawala transactions. Although this will not amount to much it will at least provide some relief to the farmers and fishermen who had invested in Saradha.