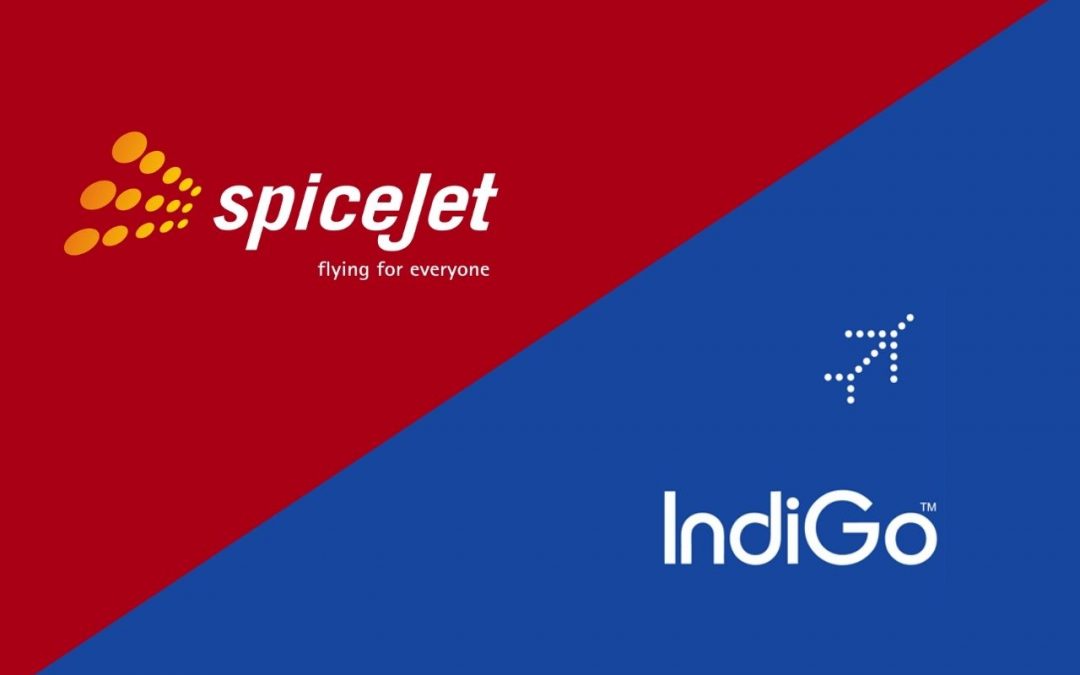 SpiceJet Vs Indigo: With flights becoming more and more affordable, flying has become a part of our lives. Over the years, many public and private airlines have started operating worldwide.

But are the financials of the companies flying high? In this article, we will have a look at the two biggest airlines of India SpiceJet Vs Indigo (Interglobe Aviation Ltd.). Keep reading to find out!

The Indian aviation industry has the most cost-sensitive passenger demand in the world. There can be two reasons for this. The first can be cultural. The second can be the distance.

On average, the time is taken to travel from one corner of the country to another does not take more than 2.5 hours.

However, the longest duration is between the New Delhi-Port Blair route which takes approximately 3.5 hours. Therefore, the customers are less inclined towards spending exorbitantly for premium services.

It was in the early 2000s  when the government of India opened the industry for private carriers to operate. Since then companies like low-cost carriers have started operating.

The industry’s growth is being propelled by the development of airports across multiple city tiers; a liberalized FDI policy; increasing adoption of information technology and a strong focus on regional connectivity.

The global aviation industry is recovering slowly from the pandemic-induced downturn, even as the impact on demand for passenger traffic is expected to continue for some time.

SpiceJet is amongst India’s leading and most preferred low-cost airlines. It is the second-largest airline in the country by the number of domestic passengers carried, with a market share of 13.6%.

In Fact, SpiceJet is the largest regional player in the country under the Regional Connectivity Scheme. It has a Fleet size of 98 with  66 mainline Boeing fleets for key destinations, 32 Q400 for regional connectivity, and 16 freighters for cargo services.

IndiGo is India’s largest passenger airline commenced operations in August 2006 with a single aircraft and has grown its fleet to 285 aircraft as of March 31, 2021.

Let us have a look at the financials of both the companies.

Spicejet saw a  growth of 518% increase in its revenue from ancillary sources in FY21. Looking at the historical growth over the last 5 years, Spicejet was seeing a rise.

It was in 2020-21 when the company saw a drastic decline due to the movement restrictions.

Indigo maintained a steady revenue growth from FY18-20.  However, the margin declined as much as 59% as the flight operations were disrupted worldwide due to Covid.

The average 5-year gross profit margin of Indigo is higher with a margin of 11.86% compared to Spicejet which has an average of 10.84%.

The net profit margin of both the companies has been affected in the last three years due to the stagnation in their operations.

However, if we look at the pre-covid years i.e,  FY17 and FY18 Indigo maintained a higher margin than SpiceJet.

How Much Are Investors Earning?

The return ratios as a metric should not be considered for the companies that have negative returns.

Since both the companies, SpiceJet and Indigo have been making losses for the last few years they haven’t been able to generate adequate returns for their investors.

It is important to remember that the goal of valuing a loss-making company is to determine its ‘worth’. The company’s valuation should justify one investment decision.

A well-established company may command considerable goodwill, despite the current slide in profitability.

How Does The Valuation Of The Company Look?

The P/E ratio is sussed by the investor to understand the value of the company. It is calculated by dividing the earnings per share (EPS) by the current market price.

However, the metric is not suitable for companies that have negative EPS. In the given case both the companies have recorded negative earnings.

As per this rule, SpiceJet has maintained a better EV/EBITDA value over the last 5 years than Indigo.

Future Prospects Of The Company

To digitally revolutionize its business, SpiceJet has invested in data technologies and Artificial Intelligence (AI).

These AI techniques have been able to predict load, revenue, and profitability for each flight in advance with a median error of only 4-6%.

Apart from that, the company is preparing to reintroduce Boeing 737 MAX aircraft and cater to the demand for passenger traffic in the near future.

With their new cargo and logistics arm, SpiceXpress and Logistics Private Limited, it will focus on providing innovative cargo services.

The company is rapidly replacing its old CEOs with fuel-efficient NEO aircraft. To bolster their liquidity, IndiGo has raised 66 billion rupees of additional funds in FY 2021 and announced to raise 45 billion rupees for FY 2022.

It has taken several cost optimization measures including fleet rationalization, optimizing aircraft utilization, redeployment of capacity in key focus markets, renegotiation of contracts, and other cost control measures, to help the Company establish positive cash flows in the future.

According to the International Air Transport Association (IATA), India is expected to overtake China and the United States as the world’s third-largest air passenger market by 2030.

This makes it more lucrative for the investors for potentially higher returns. That’s all for this article on SpiceJet vs Indigo (Interglobe Aviation Ltd.).

We hope you enjoyed our article on “SpiceJet vs Indigo.” Please let us know what you think in the comments section below. Happy Investing!