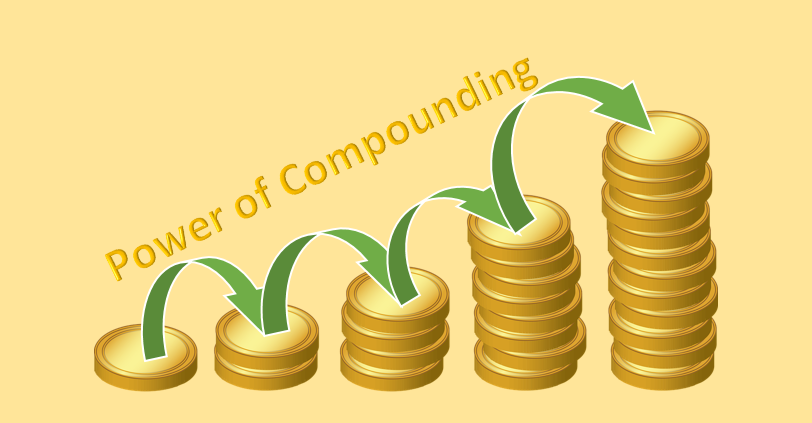 The Power of Compounding- Secret of Making Money

The Power of Compounding- Secret of Making Money: Benjamin Franklin once wrote somewhere: ”’tis the stone that will turn all your lead into gold Remember that money is of a prolific, generating nature. Money can beget money, and its offspring can beget more.‘‘

At a very young age, I was introduced to the concept of the power of compounding by my grandfather. He told me a story to explain it better which I am going to narrate here:

“Once upon a time, there lived an honorable king in a prosperous country. He was well known all over the country for his trustworthy words as he always kept his promise no matter what. Because of this nature of the King, he was widely regarded by people in his kingdom.

All the people in his kingdom were very happy and leading a peaceful life. However, there was a cunning burglar in his capital city. Once, when he was trying to steal some jewels from one of his minister’s house, he was caught red-handed. He was presented in front of the King. At that time, the king was playing ‘CHESS’ with one of his ministers.

The punishment for stealing in that country was death. Nevertheless, the burglar knew about the honorable nature of the king. He demanded one last wish from the king. The king agreed and said that if it was in his power and goodwill, he will fulfill his wish.

The burglar said, “O Brave and honorable King! I knew that the punishment for stealing in this country is death. However, I tried to steal some jewels only because I could not see my family suffering from hunger. After I am gone, I just wish them to have enough food to carry on their lives for a few days before they manage it themselves.”

Then he further added, “My wish is simple. As I disturbed you while you were playing chess, I want my wish to be related to your game. I only wish for one grain of rice for the first square of the chessboard, two grains for the second square, four grains for the third square, eight for the fourth square and so on for all 64 squares.“

The King granted the burglar’s wish without much thinking and regarded it as a small wish. He happily accepted his wish and promised that he will only be prosecuted after his last wish was fulfilled. However, a week later, the king’s treasurer informed the King that even his whole kingdom doesn’t produce as much rice as promised. The quantity of rice promised might not even be produced by combining many countries.

In the end, the King was forced to give his kingdom and all his possessions to the burglar, as he could not keep his promise. That is the power of compounding.””

I was amazed when I realized what wonders compounding can do. I still remember my grandfather’s words after the story “The strongest force in the universe is Compound Interest.” Although later, I found out that these words weren’t his words but were originally Einstein’s words. However, hearing this from my grandfather at that young age was quite inspiring.

Another book that I read at a young age- ‘Think and Grow Rich’ by Napoleon Hill. This is the number one self help motivational book that I have came across. I definitely recommend everyone to read this book.

The Power of Compounding:

Now, you might be thinking what’s so great about the power of compounding. Even a fifth-grader knows the term. Yes, you might argue that. However, there are things that the fifth-grader doesn’t know and if he understands it, he can set the whole world on fire.

Let’s see how the concept of compounding works. Suppose Rajat invested Rs 1,00,000 at the age of 20 and locks all his investments till retirement. Arvind, however, doesn’t make any investment till he is 40. At 40, he invested Rs 1,00,000 and locks it till the age of 60. The table below tells you how their investments would turn out when they both are 60, assuming that the growth rate is 15 percent per annum. The results are eye-opening. 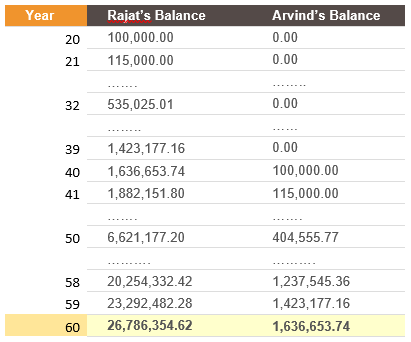 On retirement, Rajat will get over Rs 2.6 Crores while Arvind will only get Rs 16 lakhs. Therefore, over 16 Times Growth in the Investment for Rajat compared to Arvind. That’s the power of compounding

Compounding is a simple, but very powerful concept. Why powerful? Because compounding is similar to a multiplier effect since the interest that is earned by the initial capital also earns an interest, the value of the investment grows at an exponential rate rather than an arithmetic linear rate. The higher the rate of return, the steeper the curve. 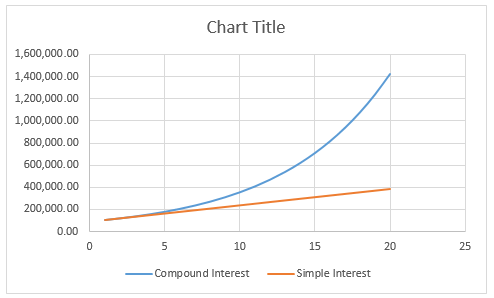 I am glad that I received this financial advice at a very young age. This financial knowledge has changed my life and still changing. I hope you understand this concept and the next time you plan to borrow money on credit cards, remember that compounding is working against you.

New to stocks and confused where to start? Here’s an amazing online course for the newbie investors: INVESTING IN STOCKS- THE COMPLETE COURSE FOR BEGINNERS. Enroll now and start your stock market journey today!