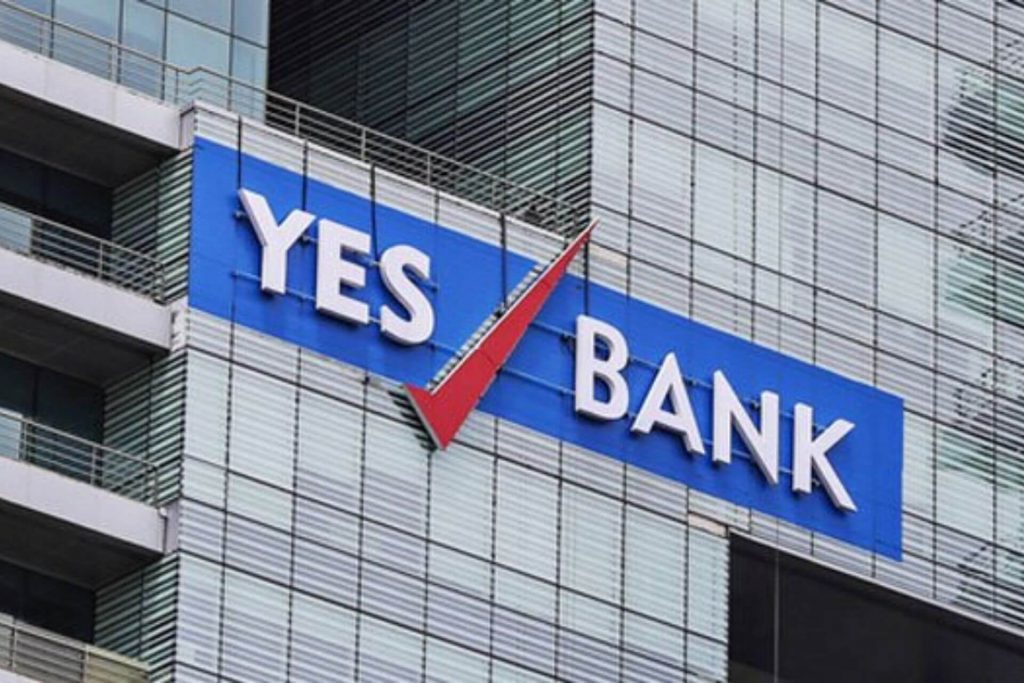 The Unravelling of Yes Bank: With news of Yes Bank shares tumbling with over 85% downfall (since 1st July 2019 till 6th March 2020) and founders accused of money laundering, it made Yes Bank hard to be recognized as the same bank that once attracted so many retail and veteran investors. Even big players such as Rakesh Jhunjhunwala made investments of over one crore in Yes Bank shares in the past. 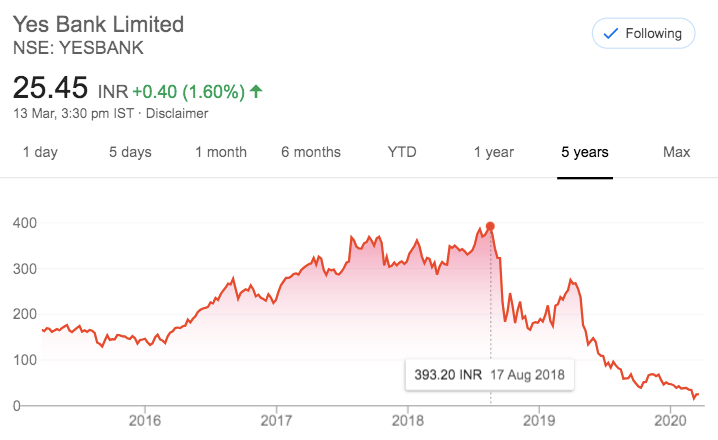 In this post, we are going to cover the Yes Bank fiasco story in order to understand what exactly went wrong with Yes Bank. We are going to discuss how this stock (that was once the darling of the investing community) turned out to be one of the worst wealth destructors in recent years. 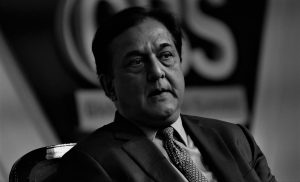 Incorporated in 2004, Yes Bank was founded by Rana Kapoor who headed the bank till 2018. His other co-founder – Ashok Kapur suffered demise during the 26/11 attacks in Mumbai which eventually led to an internal feud between his next of kin and Rana Kapoor.

Despite all these, Yes Bank also withstood many obstacles including the demonetization cash crunch which eventually worked out in their favor. It helped them rising up to become one of the digital transaction leaders having over 1,000 branches, 1,800 ATMs and over 1,8000 employees throughout the country by 2019.

What led to Yes Bank losing +85% in market value?

On 5 March 2020, the Reserve Bank of India (RBI) announced taking control of Yes Bank in an attempt to avoid the collapse of the bank. Although the stock crash may come as a surprise to many, there seem to evidently be many red flags placed by Yes Bank on the road to this date – 5th March 2020.

This began with Global financial services firm UBS flagging serious concerns in 2015 over the loans given out by the bank which included debt-ridden Cafe Coffee Day, DHFL, Anil Ambani led Reliance and also currently bankrupt and grounded airline Jet Airways.

Due to multiple bad loans Yes Bank started gaining undue attention from the RBI over their Non-Performing Assets (NPA). This was because Yes Bank was avoiding recognition of these bad loans as NPA, but instead resorting to providing these borrowers with extended new loans or having their existing loans restructured. This led to a wrong portrayal of NPA’s that shows the percentage of total loans or advances that are in default or in arrears.

Anyways, it was promptly caught by the RBI in 2015, 2016 and also in 2017 which involved the RBI directing Yes bank along with several other banks to report transparently. The stressed loans given out by Yes Bank stood at Rs 50,396 crores as of September 2019.

In January 2019 Yes Bank announced that Rana Kapoor would step down from his CEO position due to restrictions placed by the RBI over the extension of his tenure. This was also followed by Kapoor along with other investors dumping their stake from Yes Bank in November 2019 which also led to a severe fall in the stock prices.

This came as a surprise as Kapoor’s earlier twitter handle claimed otherwise. 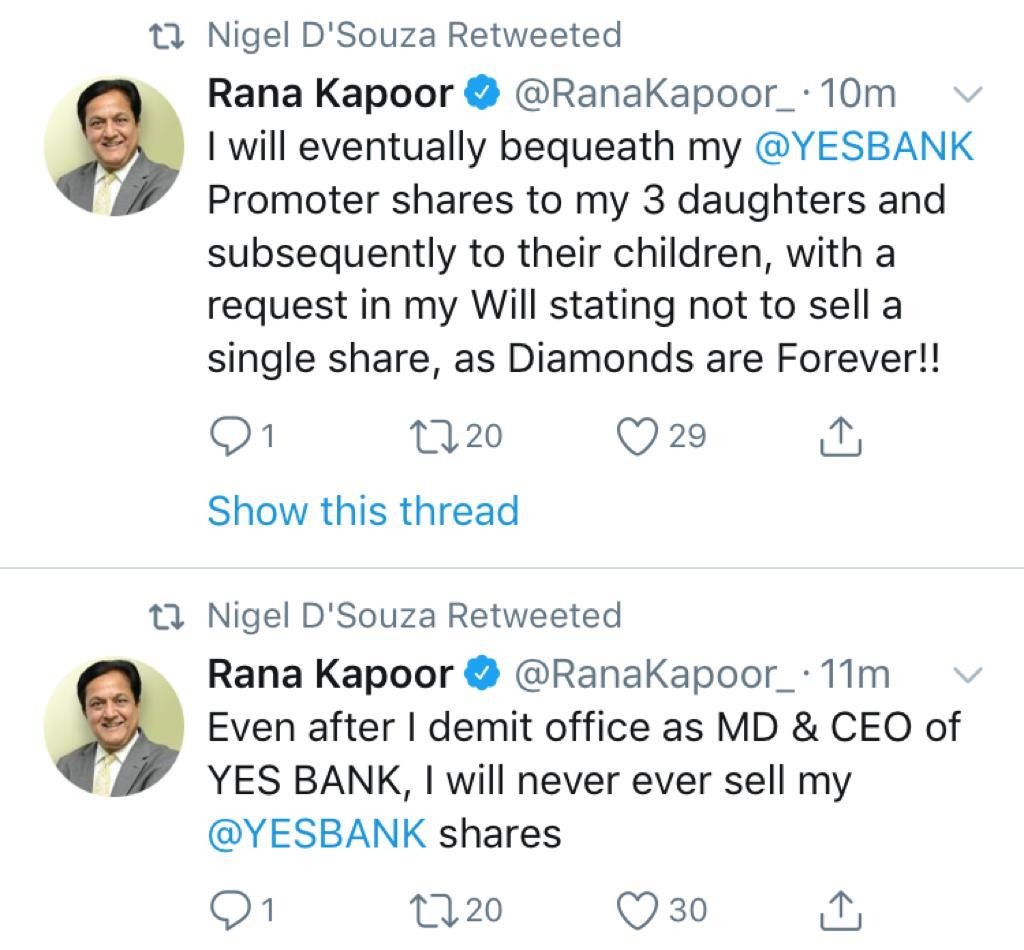 Within a month of Ravneet Gill taking over as head of Yes Bank on March 2019, Moody’s estimated their NPA to stand at 8% (which is an extremely high rate). This gave the picture that eight percent of all loans given out by Yes bank were Bad loans and hence they also downgraded them. 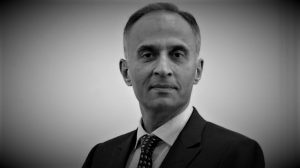 Due to multiple factors that involved bad investments, manipulation of the balance sheet, dumping of holdings by the founders and a high NPA eventually led to the RBI imposing a moratorium on the bank on March 5th, 2020, due to which individuals were allowed an aggregate withdrawal of only Rs.50,000 till April 3rd, 2020 initially.

This action was taken by the RBI to avoid a situation of a bank run where all the depositors demand their deposits be withdrawn in full, particularly in cases where the stakeholders have lost their trust in their bank (a scenario of which Yes Bank has become a prime example).

The ailing banking sector in India which has relied on government intervention time and again has held State Bank of India (SBI) the Indian government bank to step up for the rescue of Yes Bank. SBI announced that it will purchase ownership of 49% with a Rs 7250 crore investment. Along with this, HDFC and ICICI are investing Rs.1000 crore each, Axis Bank investing 600 crores, Kotak Mahindra Bank investing 500 crores, Bandhan Bank investing 300 crores forming the dream team along with Jhunjhunwala, Damani and Azim Premji Foundation altogether making up an investment of over 12000 crores.

The SBI rescue does not only aim at providing financial relief to Yes Bank but also aims at avoiding any further panic among the depositors of Yes Bank and possibly avoid a bank run. Steps were further taken with the initial moratorium which was capped with a withdrawal limit of Rs.50,000 till April 3rd will now be lifted on March 18th at 6 p.m.

SBI has also appointed Prashant Kumar as the new CEO who had earlier worked in SBI and has an experience of over 30 years in the Banking sector. The SBI is also to nominate two officers as directors in the additional new board with RBI to appoint more directors if necessary. 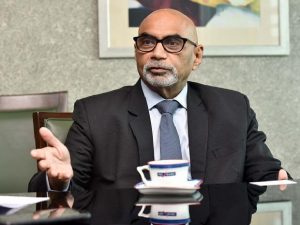 Ravneet Gill who had earlier helped Deutsche Bank achieve one of the lowest NPA as the CEO failed to steer Yes Bank away from the course set by Rana Kapoor. The former CEO and founder currently face allegations over his involvement in money laundering and corruption but the dream bailout team has somehow managed to shine a light at the end of the tunnel.

While the government plays the blame game with the opposition, we should take into consideration that the rising NPA involves multiple Indian banks having NPA’s higher than that reported by Yes Bank. As reported by CARE Ratings, it has put India in a ranking bracket which includes countries infamously known as PIIGS ( Portugal, Ireland, Italy, Greece, and Spain) who have faced severe debt crises in the recent past.

Moreover, with the economic slowdown already faced by India along with the recent Coronavirus scare and Oil price crash, the road doesn’t look bright for the government to take on added responsibilities of rescuing private banks.