Top Performing Sectors in 2021 – Sectors That Have Given The Best Returns! 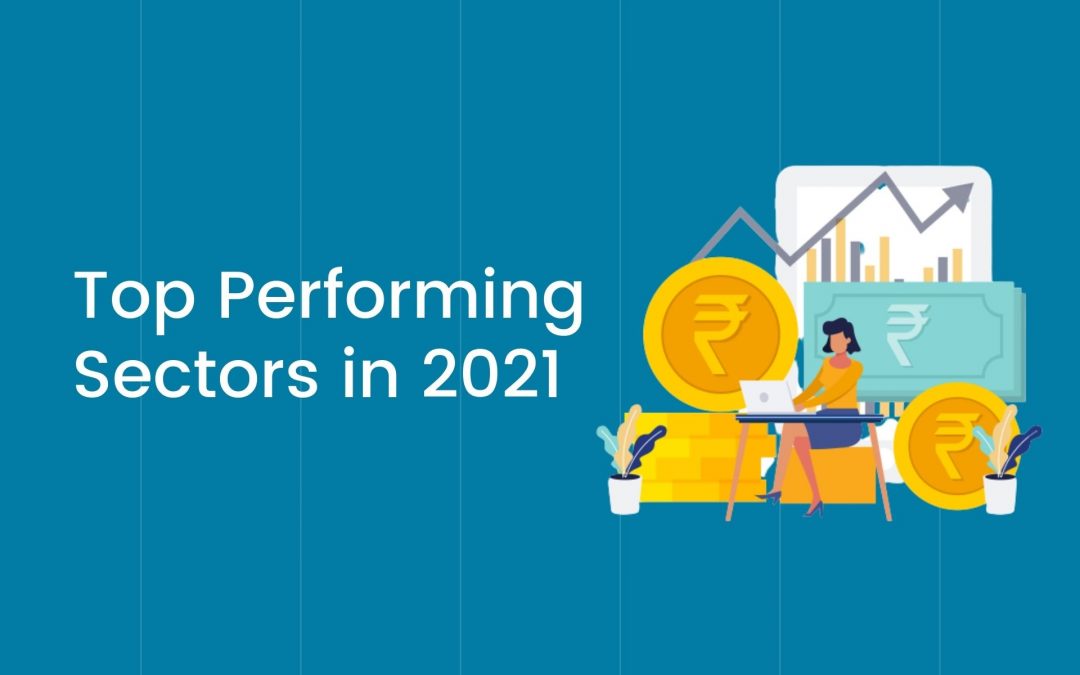 2021 turned out to be a bumper year for the stock market despite the pandemic with many Indian equities breaking records during the year. The indexes of the country, BSE Sensex, gained 25.01% during the year and the NSE Nifty, increased by 26.71%. In this article, we will look at the top performing sectors in 2021 that have given the best returns and helped in the rally of these indices. Keep reading to find out!

The major contributors to the stock market which rallied during 2021 were the Domestic investors. During 2020 they took out around ₹54,000 crores from the markets. However, in 2021 the investors put in around ₹82,340 crores until December 2021. The number of new Demat accounts continued to grow at a rapid momentum from 2020. A total of 27.4 million new Demat accounts were opened till December 2021. Foreign investors contributed very little to the market rally.

Their net investment as of December 2021 was just ₹26,000 crore, compared to the ₹1 lakh crore plus amounts in 2020 and 2019. The IPO frenzy this year also aided in the growth of the markets. Around 118 companies went public out of which 55 were Small and medium enterprises (SME). Now let us take a look at the sectors that drove this rally!

Sectors That Have Given The Best Returns in 2021

Here we take a look at the top performing sectors in 2021 that performed the best and were the major drivers of the market.

The sector saw its best performance in at least 12 years. As the economies around the world opened up after lockdowns the shortages of both base metals and ferrous were felt. The high demand against the less supply resulted in prices hitting multi-year highs. This helped domestic companies to report supernormal profits in the last few quarters of 2021.

The Nifty metal index gained around 70% during the year. All the 15 constituents of the Nifty Metal index advanced, with five gaining over 100%. Adani Enterprises Ltd gave a return of around 245% during the year. The other stocks that gave higher returns and pulled the index up were National Aluminum Company Limited (NALCO)and Apl Apollo Tubes Ltd which gave 135% and 126% returns respectively. Vedanta saw a surge of 111% in its prices whereas Hindustan copper rose by 104%.

Since the onset of the pandemic, the Information Technology (IT) sector has been on the rise. The Nifty IT index surged 59.6 percent, after roaring 54.9 percent in 2020. IT services got a big boost as corporates started investing a lot more into digital initiatives. The constituent that gave the highest returns of 183% was Mindtree. L&T Technology Services Ltd gained around 138% in 2021. The share price of Coforage ltd surged around 106.03% during the year. Mphasis Ltd., a global information technology services company saw its price rise by 109.52%.

India is the largest exporter of IT. In fact, exports dominate the Indian IT industry and constitute about 79% of the industry’s total revenue. The IT services are expected to be a $3 trillion opportunity in the coming years. The IT & business service industry’s revenue was estimated to be around US$ 6.96 billion in the first half of 2021 which was an increase of 6.4% Year-on-year.

NIFTY Realty Index is designed to reflect the behavior and performance of Real Estate companies. The Index comprises 10 companies listed on the National Stock Exchange of India (NSE). The index grew by 54.36% in FY21. The best performers include Macrotech Developers Ltd that gave a return of more than 165.87%, Sobha Ltd whose stock price grew by 107.06%, Indiabulls Real Estate Ltd Brigade Enterprises Ltd which saw a surge of around 81.25% in its price.

The traction can be attributed to the increase in demand for residential properties. The low-interest rates fueled the growth of the sector. Analysts also believe that the sector will continue to grow as the interest rates are expected to remain low as the new variant has emerged as a threat.  Despite that, the real estate sector in India is expected to reach US$ 1 trillion in market size by 2030.

There are 2 major indices that track the listed banks in India. The first is the Nifty PSU BANK. The Nifty PSU Bank surged around 44.6% in 2021. The major contributors to the rally are Indian Overseas banks which surged 91%, State Bank of India jumped 67%, and Indian Bank which scaled 63% in the past year.

On the other hand, the Nifty Bank showed an average performance with an increase of only 14% during the year. The best performers of the index were AU Small Finance Bank Ltd which added around 35% to its share price followed by IDFC First Bank which saw a surge of 27%.

The banking sector is set to witness significant reforms in the coming year with the privatization of public sector banks and plans of strategic disinvestments. The private sector banks posted a healthy profit with a reduction in bad loans.  The Non-Performing Assets (NPAs) of the banking sector have declined to ₹8,35,051 crore as of March 31, 2021.

– List of All the Stocks in NIFTY PSU Banks

India has seen the largest increase in energy demand in recent times. The country’s continued industrialization and urbanization will make huge demands of its energy sector and its policymakers. Over 80%of India’s energy needs are met by three fuels: coal, oil, and solid biomass. The renewable energy sector is also rapidly growing. The total value of acquisitions in the renewable energy sector stood at $6 Billion which was a 300 percent increase from the previous year.

The Nifty Media Index is designed to reflect the behavior and performance of the Media & Entertainment sector including printing and publishing in India. The highest gaining constituent of the index was Saregama India Limited which saw a 503.30% increase in its share price which was followed by Network 18 Media & Investments Ltd and TV18 Broadcast with 146.30% and 87.47% increase, respectively.

With high investment in premium and original content, the Indian OTT sector is one of the most competitive amongst emerging markets. The Indian media and entertainment industry has revived to pre-covid levels. The sector is expected to grow at a nine to eleven percent CAGR to reach $55-70 billion by 2030, according to a report released by The Confederation of Indian Industry (CII)-The Boston Consulting Group (BCG).

The Sensex touched a high of 58,409 and ended with a gain of 460 points at 58,254 on the last trading day of the year. The NSE Nifty settled 150 points higher at 17,354 and was up a whopping 24.1 percent for 2021. Despite the brutal second wave of covid and rising inflation, markets hit record highs multiple times during the year with pockets of super gains in select few sectors. The year also saw many multibagger stocks giving high returns to the investor. However, the new variant of Covid is raising concerns among experts and investors about the performance of the market in 2022. Happy New Year!