10 Largest Stock Exchanges in the World By Market Cap! 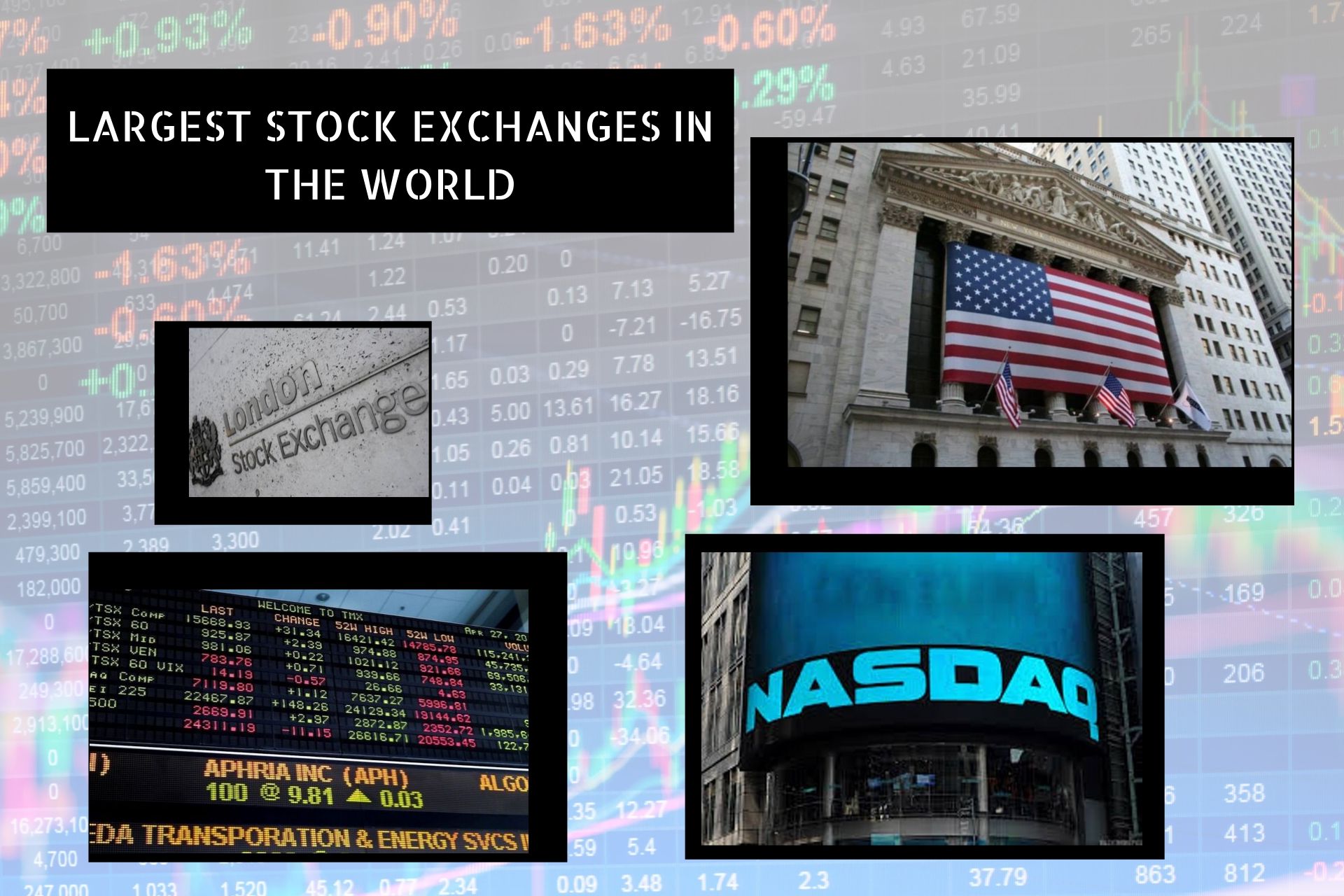 In this post, we are going to discuss the biggest and largest stock exchanges in the world by the total market cap of all listed companies. Before we start this post, let us brief a bit about what the stock exchange is.

Did you know? North Korea (expected), Afghanistan, and Cuba are part of the few countries that do not have a stock market!

What is a Stock Exchange?

A Stock Exchange is an organization that anchors formulated markets for dealing in securities, derivatives, commodities, and other financial equipment. It is one of the powerful ingredients of the financial market. Here, buyers and sellers club together to carry out transactions. And, securities are bought and sold out according to clear-cut rules and regulations.

Stock exchange furnishes the required edifice and framework to the brokers and members who deal with asset classes. It also governs the transaction activities to certify free and fair trade.

The most engaging aspect is that the Stock exchanges are also deemed as the financial measures of an economy where industrial development and firmness are mirrored in the index. Let us now take a look at the largest Stock Exchanges in the world!

10 Largest Stock Exchanges in the World (By Market Cap)

Here is the list of the biggest stock exchanges in the world based on the market capitalization as of June 2021:

Back to the back of mergers has aided the New York Stock Exchange to gain its colossal size and global footprint. The blue-chip companies which are listed under NYSE are Berkshire Hathaway Inc, Coca-Cola, Walt Disney Company, McDonald’s Corporation, etc.

2nd on the list of the largest stock exchange in the world is NASDAQ which was primarily an abbreviation and stage for the National Association of Securities Dealers Automated Quotations. It is an American stock exchange and is headquartered at 151 W, 42nd Street, New York City.

The NASDAQ commenced its business on February 8, 1971, and is sighted as the world’s first electronically traded stock market. NASDAQ has a combined market capitalization of US$ 22.1 trillion as of June 2021 and is ranked 2nd in the list of largest stock exchanges.

It consists of more than 3,000 stocks listed under it and comprises of the world’s humongous tech giants such as Apple, Microsoft, Google, Facebook, Amazon, Tesla, and Intel.

The Shanghai Stock Exchange (SSE) is located in the city of Shanghai, China, and is one of the two stock exchanges plying autonomously in the People’s Republic of China. Although its foundation traces back to 1866, it was adjourned after the Chinese Revolution in 1949. However, The Shanghai Exchange in its contemporary outlook was laid down in 1990.

Currently, Shanghai SSE is the world’s 3rd largest stock exchange with a combined market capitalization of US$ 7.6 trillion as of June 2021. The most interesting fact is that the absolute market cap of the SSE is constructed out of formerly state-run insurance companies & commercial banks.

The Japan Stock Exchange (JPX) is a Japanese financial services corporation that operates multiple securities exchanges including Tokyo Stock Exchange and Osaka Securities Exchange. It was formed by the merger of the two companies on January 1, 2013.

JPX has close to 3,500 listed companies with a syndicated market capitalization surpassing the US$ 6.6 trillion as of June 2021. The TSE’s metric indicator is Nikkei 225 and it is home to some of the voluminous  Japanese giants with international exposure, including Toyota, Suzuki, Honda, and Mitsubishi, and Sony.

As of June 2021, SZSE has 2,375 listed companies and has a market capitalization of US$ 5.7 trillion as of June 2021. Many of the companies within this market are subsidiaries of companies in which the Chinese government maintains controlling interest.

Over the years, it amalgamated with multiple exchanges, most particularly the New York Stock Exchange. It steers financial markets in Amsterdam, London, Brussels, Lisbon, Oslo, Dublin, and Paris.

It has around 1,500 listed companies leading to a market capitalization worth US$ 6.4 trillion as of June 2021. EURONEXT provided the segments which are equities, warrants, exchange-traded, bonds, commodities, funds and certificates, derivatives, indices, and foreign exchange trading platforms.

LSE is also the maiden source of benchmark prices, equity-market liquidity, and market data in Europe. Some of the massive companies listed under the LSE are Barclays, British Petroleum, and GlaxoSmithKline.

The Toronto Stock Exchange (TSX) is situated in Toronto, Canada. It was introduced in 1852 and is held and wielded as a subsidiary of the TMX Group. It is the ninth-largest exchange in the world and has 2,231 listed companies with a combined market capitalization of US$3.1 trillion as of June 2021.

National Stock Exchange of India Limited (NSE) is the leading government-owned stock exchange of India, located in Mumbai, Maharashtra. NSE was established in 1992 as the first dematerialized electronic exchange in the country.

The NSE has approximately 1952 listed companies and has a market capitalization of US$3.07 trillion as of June 2021. NSE’s flagship index, the NIFTY 50, a 50 stock index is used extensively by investors in India and around the world as a barometer of the Indian capital market.

In a country’s economy, stock exchanges play a critical role. Investors and traders can use their platform to trade and invest in securities as well as other financial assets like commodities, bonds, and derivatives. However, it is critical to understand how the market works before investing.