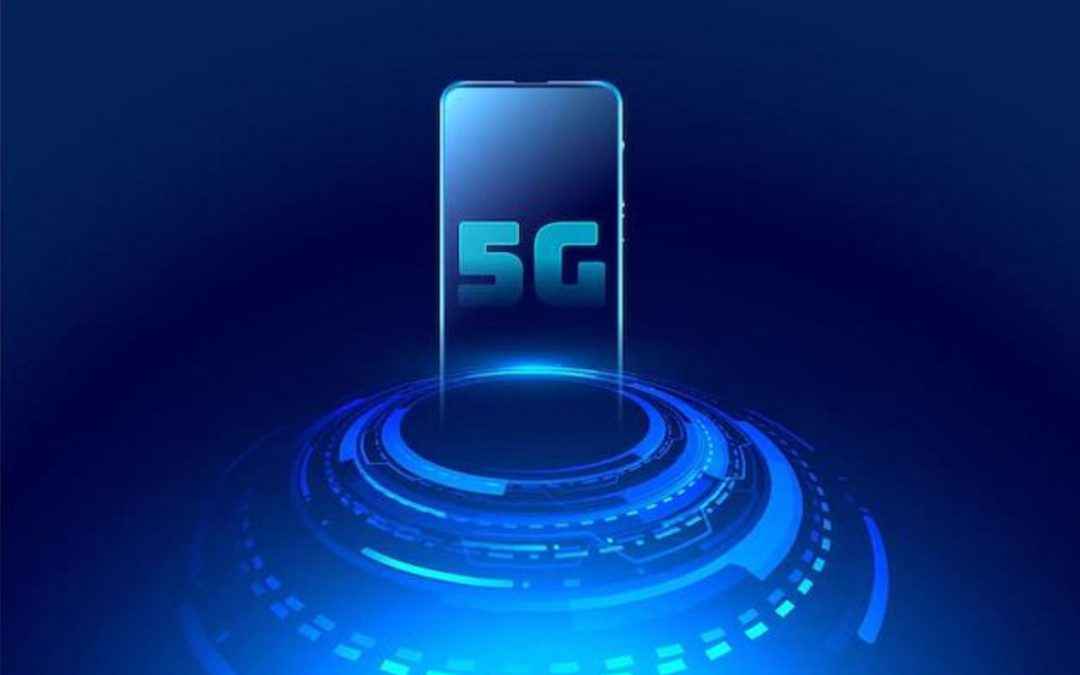 5G Stocks in India: People are hooked to their phones throughout the day. Thanks to fast and affordable data packs! After connecting humans, cellular technology has the ability to connect almost everything. 5G is here just to do that.

It is poised to mark a significant impact on not only telecommunications but almost every element of the economy. But where does India stand in the 5G technology race? In this article, we will take a look at the telecom industry and the best 5G stocks in India.

India is a ‘mobile first’ country and the cellular internet is central to every person’s digital life. It is a way they communicate, consume and create content, commerce, and connect with the community.

The government’s vision of India becoming a digital economy creates a positive broader sentiment for 5G. In order to encourage investment in the segment, 100% Foreign Direct Investment (FDI) under automatic route is now permitted.

Despite this, the sector has been under stress for some time. For that reason, the telecom sector was given a bailout package in a bid to alleviate the financial stress in the sector in September 2021. The telecom industry has sought another relief package from the government to enable them to roll out affordable 5G services.

According to the latest report published by Ericsson, the 5G technology will represent around 39 percent of mobile subscriptions in India at the end of 2027, estimated at about 500 million subscriptions. The Department of Telecommunications (DoT) concluded the spectrum auction in July for airwaves including the ones for 5G connectivity.

The industry can be categorized into two segments. They are:

Bharti Airtel Limited, also known as Airtel, is an Indian multinational telecommunications services company. It operates in more than 17 countries as well as the Channel Islands. It is the second-largest mobile network operator in India and the third-largest in the world. Airtel saw an added 2.25 million customers which summed up to 360.03 million in March 2022.

Airtel had announced in November 2021 that it successfully conducted its first 5G trial in Kolkata, in partnership with Nokia. It was allotted a test spectrum in multiple bands by the government for the validation of 5G technology and use cases. It will join forces with leading global companies such as Accenture, AWS, CISCO, Ericsson, Google Cloud, Nokia, Tata Consultancy Services (TCS) to work with industry-leading brands such as Apollo Hospitals, Flipkart, and several leading manufacturing companies to test 5G based solutions.

On the financial front, the company saw a 17% growth in revenue which stood at Rs. 1,16,546 Cr and posted a net loss of Rs 8,305.2 Cr. The company has accumulated a lot of debt over the years for which it has to pay high interest compared to its earnings. The cash flow in the company is also weak as compared to its peers. All these can be attributed to the fact that it faces stiff pricing competition in the market. Despite all this, the promoter’s pledge remains at zero.

Bhartil Airtel committed Rs. 37,292 crore to acquire different bands across all the circles of the country to roll out 5G services. Furthermore, increased capabilities in present bands for Rs. 7,792 crore.

To establish its presence in the 5G segment, Vodafone Idea has been deploying several technologies such as Massive MIMO, DSR, Cloudification of Core, which is central to its future growth strategy. Vi has also initiated 5G trials with its major Network partners Nokia & Ericsson on the recently allocated 5G spectrum in 2 cities in India. It must be noted that the company still faces some challenges and would require the government’s support to stay afloat.

Coming to the financials of the company, it saw a decline in revenue in FY22 which was Rs. 38,516 Cr. The company posted a net loss of Rs 28,245 Cr in the same year. The performance was impacted due to its ability to generate cash flow that it needs to settle its hefty liabilities and dues that are pending. Adding to that is the loss of customers that it is facing. However, the company has zero promoters pledge.

Debt laden Vodafone Idea purchased 6,228MHZ units of airwaves in different bands for Rs. 18,799 crores. Despite being a weak operator, the purchase across 17 circles will help Vi to provide 5G services across most of the country.

MTNL is a wholly-owned subsidiary of Bharat Sanchar Nigam Limited (BSNL). MTNL is the largest ISP in Mumbai and Delhi (in terms of market share), and the third-largest ISP in India though it has a presence just in two circles. The company has its global depository receipts on London Stock Exchange and American depository receipts on New York Stock Exchange.

The DOT has allocated spectrum to MNTL for 5G trials in Delhi. It will conduct trials in partnership with C-DoT. On this announcement, the stock price surged. In fact, the MNTL shares have given around 124% return in the last year.

MTNL reported a revenue of Rs 1,149 Cr and a net loss of Rs 2,603 Cr in FY22. The losses can be attributed to the reduction in revenue and increased competition leading to tariff reduction. MTNL has a zero promoters pledge. A few red flags for the company can be the high-interest payments compared to earnings and the inability to generate cash for some time now.

It must be noted that Reliance JIO is not a listed company. It is a part of Reliance Industries. In 2016, RIL launched JIO which turned out to be the disruptor of the telecom industry. With JIO, they introduced 4G services in the Indian market at rock bottom prices which were approximately 95% lower than its competitors. The voice calls and OTT platforms of the company were offered for free along with its SIM cards.

JIO now wants to be the leader in the 5G segment as well. It has developed a 100 percent home-grown and comprehensive 5G solution, which is fully cloud-native and digitally managed. The company has successfully conducted trials of connected drones on its indigenous 5G network. It has partnered with Qualcomm to manufacture critical equipment for the 5G ecosystem in India.

In the spectrum auctions, Reliance Jio Infocomm spent Rs. 88,708 crores to acquire 220MHz airwaves in the expensive 700MHz band. The amount is almost twice of what Airtel, the second largest bidder paid.

– List of All the Service Providing Stocks in India

The service providers use equipment to facilitate the uninterrupted flow of networks across the country. These Telecommunications equipment providers will also play an important role by creating the infrastructure required for digital transformation into 5G. Some of the major stocks in this space include:

HFCL (also Himachal Futuristic Communications Limited) is an Indian telecom company that was incorporated in 1987.  It serves various industries, such as telecommunications, security, railways, textiles, and Cable fiber.

It is building a portfolio of 5G products including 5G Radio Access Network (RAN) and 5G Transport equipment, both for Indian and foreign markets. The 5G RAN portfolio will comprise products such as Macro Radio unit, cell site router, and aggregation routers. It is also looking to tap the ₹1-lakh crore 5G market opportunity in India, and exports to West Asia, South-East Asia, and Europe.

On the financial front, HFCL earned total income of Rs 4,727 Cr and a Net profit of Rs 313 Cr in FY22. The company has seen improved cash flow generation in the last two years. The promoter’s pledge stands at 44.72%.

ITI (Indian Telephone Industries) Limited is a government-owned telecommunications equipment manufacturing company in India.  It is under the ownership of the Department of Telecommunications. It has contributed to 50% of the present national telecom network in the country.

The company is into telecom equipment providing equipment to BSNL, MTNL, and Defence. It also plans to improve and invest in technology by acquiring it from strategic partners, with a particular focus on high-growth industrial categories. The company manufactures 5 G-enabled devices so as to smoothen the test trial of 5G deployment.

The PSU reported a revenue of Rs 1,861 Cr whereas the net profit was Rs 121 Cr in FY22. Due to the high debt in the company, the interest burden is higher than the earnings. On the positive side, the company has seen a growth in net profit margin and the promoter’s pledge is zero.

Sterlite Technologies Ltd (STL) is an Indian multinational technology company. It is specialized in optical fiber and cables, hyper-scale network design, and deployment and network software. It has a global presence with offices in China, US, SEA, Europe, and MEA. The company plans to combine the power of optical, wireless, virtualization, and deployment methodology to build a robust 5G infrastructure for India and the world.

In that attempt, STL has developed Opticonn, which is a high-power optical connectivity solution. It has launched its Accellus solution that includes 5G multi-band radios co-developed in partnership with Facebook Connectivity. In addition to that, it has also developed O-RAN compliant indoor small cells, outdoor WiFi6 radio solutions, and RAN Intelligent Controller (RIC).

In FY21, the company earned a revenue of Rs 5,754 crores and a subsequent net profit of Rs 62 Cr. Sterlite has zero promoter’s pledge. The company has witnessed a declining net profit margin over the last 2 years. The cost of long-term projects of the company is also growing YOY.

Tata-owned Tejas Networks is an optical, broadband, and data networking products company based in India. It has built many IPs in various areas of Telecom networking and has emerged as a major exporter to other developing countries in Southeast Asia and Africa. Tata Group acquired a 43.35% stake in Tejas Networks in order to make entry into the Telecom equipment market.

Tejas Networks is into the manufacturing of telecommunications equipment and has multiple licenses to export its product to various countries. The company has patented its products in 5G equipment. It bagged the deal for Optical Networks expansion deal from Airtel. It is also expected to benefit from the PLI scheme to promote Telecom equipment manufacturing in India.

Coming to the financials of the company, it earned a revenue of Rs 551 Cr and posted a net loss of Rs 63 cr in FY22. One of the strengths of the company is that it has no debt. Further, the promoter’s pledge also stands at Zero. However, Tejas network has not been able to generate adequate cash flow and the net profit margin has also been declining for the last 2 years.

In this article, we covered the telecommunication industry and the best 5G stocks. It also shows that India has the potential to become one of the super digital economies in the world. And the 5G revolution will play a key role in it. This opens up huge opportunities for investment and growth. That’s all for this post on 5G Stocks in India, Let us know what you think in the comments below. Happy investing!