Acquisitions done by BYJU’S in 2021 – Complete List with Overview 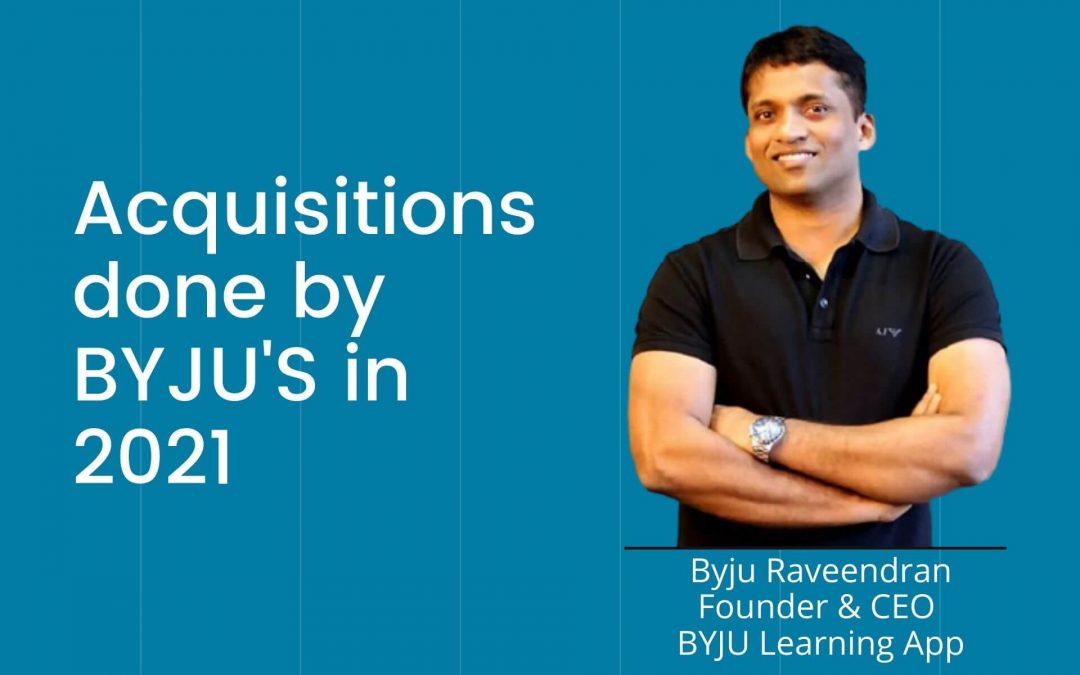 Acquisitions done by BYJU’S in 2021: BYJU’S is on an acquisition spree this year and there seems to be no stopping it! Yes, you read it right. BYJU’S, an Indian multinational educational technology company has spent over $2.4 billion this year on acquisitions. This Indian Ed-tech unicorn became the world’s largest company in the sector during the Covid-19 pandemic.

Students and professionals today looked up to them as an alternative to upgrading their skills, while schools and offices remain shut.  This was a boost for the company. This was further fueled by the aggressive acquisition strategy adopted by the company. In this article, we will have a look at all the acquisitions done by BYJU’S in 2021 and try to analyse how it will help the Ed-tech firm to grow.

BYJU’S was launched by Raveendran and Divya Gokulnath in 2011. It claims to have over 100 Million students on its platform. The company also said in a statement that they have over 6.5 Million annual paid subscribers with an annual renewal rate of 86% on its personalised learning programmes.

It is backed by marquee investors such as General Atlantic, Sequoia Capital, the Chan-Zuckerberg Initiative, Naspers, Silver Lake, Tiger Global among others.

Byju’s is also accelerating its plans to go public soon. The company is expected to file IPO documents as early as the second quarter of next year, as per Bloomberg reports. The valuation s estimated to be over $40 Billion. The startup closed its Series F round at $150 Million led by Asmaan Ventures, which is the first tranche of the $1 Billion pre-IPO round.

The Acquisitions done by BYJU’S in 2021

This year alone, the company has made nine acquisitions, spending close to $2.5 billion to acquire various edtech businesses.

These acquisitions are being funded from its recent $1.5 billion fund-raise from UBS Group, Abu Dhabi sovereign fund ADQ and Blackstone Group LP. This drove the valuation of the company to $16.5  billion, making it the most valuable startup in the country, according to market research firm CB Insights.

Now, let us have a look at all the acquisitions done by BYJU’S in 2021.

Aakash is well known for its comprehensive, result-oriented JEE and NEET preparation programs. It offers coaching for other entrance exams as well. From 12 students in 1988, Aakash grew to 215 centres, with a student count of more than 250,000.

AESL has plans to launch 106 new centres across the country in the next 5 months. The company is also increasing its presence in Tier 3 and 4 cities.

BYJU’S spent close to $1 Billion to buy Blackstone Group-backed, Aakash Educational Services Ltd in April this year. This is one of the most expensive acquisitions in the Indian edtech space. This was one of the first acquisitions done by BYJU’S in 2021.

Leveraging their expertise, BYJU’S and AESL will create engaging and personalized learning programs bringing the best of hybrid learning for the medical and engineering aspirants. Post-acquisition, Aakash Educational Services will continue to function independently under the leadership of BYJU’S.

It is one of India’s leading ed-tech companies for professional and higher education. They offer career-relevant programs from world-class universities in the most in-demand domains. The company has the best-in-class completion rates and learner satisfaction rate.

Eight-year-old Great learning is a bootstrapped company and has delivered over 60 million hours of learning to 1.5 million learners from over 170 countries. It has a network of 2800 industry expert mentors and works with over 500 corporate partners for their upskilling and talent needs.

BYJU’S has acquired the professional and higher education platform for $600 million in a cash-and-stock deal. This will mark Byju’s’ push into the professional upskilling and life-long learning space in India and globally.

Great Learning will also continue to operate as an independent unit under the Byju’s group under the leadership of BYJU’S.

Epic is a popular digital book platform with over 50 million users. The digital reading platform is particularly meant for children up to 12 years of age. The company collects and analyzes real-time anonymized and aggregated data on how many children read a book, how deeply they engage with it and where their interest starts to wane.

The platform has a presence across 90% of elementary schools in the U.S. It has accumulated more than 2 million teachers and 50 million kids, up from 20 million last year.

Byju’s has sealed a $500-million deal for this acquisition with an aim to boost its position in the US. This will enable them to create engaging and interactive reading and learning experiences for children around the globe.

Tynker is also a K-12 creative coding platform that enables students to develop coding skills. It can be used to design and power animations, games, music, robots and drones, smart devices, virtual worlds and more.  Tynker is accessible through the Internet browser, Tynker and Tynker Junior mobile apps. The startup offers both free and paid subscription models.

Tynker, which counts BBC Learning, Google, Microsoft, Mattel and NASA among its partners, operates an eponymous coding platform. It has amassed over 60 million kids on its platform across 150 countries.

As per a report by Money Control,  BYJU’s acquired the company for around $200 Million. However, the terms of the deals were not disclosed. Tynker’s three founders along with its 50-member team will join BYJU’S. The acquisition will further help BYJU’s to strengthen its foothold in North America.

Scholr is an AI-enabled online education company founded by IIT, IIM, ISB and BITS-Pilani alumni. Within a year of its inception, the app was downloaded by more than 1 lakh students. There were more than 10 lakh questions asked using the platform. It provides instant step-by-step solutions to any question submitted on the app in the form of a simple photo.

The company specialises in homework help across NCERT textbooks, state board textbooks and other board books. The app also provides academic support to users from peers and experts on the platform.

BYJU’s has acquired Scholr for about $180 Million. The acquisition is said to be part of BYJU’s strategy to scale up its presence into multiple areas related to education.

Founded in 2013, Toppr at present provides a learning app for kindergarten to 12 (K-12) students, allowing them to take live classes and tests and view recorded learning content. It also provides a school management solution to School OS, helping educational institutions conduct online classes. Other offerings include its exam preparation app and code-learning app for kids- Codr.

BYJU’S acquired Toppr for $150 million. As per the regulatory filings, Toppr will hold 1% in Byju’s. This acquisition will help it consolidate and improve its market position in the K-12 learning segment, where it faces heavy competition from SoftBank-backed Unacademy and Tiger Global-backed Vedantu.

Gradeup has a presence in Joint Entrance Examination (JEE) and National Eligibility Entrance Test (NEET).  It is going deeper into the exam preparation space and expanding its offering across 150 exams in 25 categories.

With Gradeup on board, BYJU’S will be able to further scale and expand their test-prep offerings in postgraduate level exams. It would help the firm increase its lead over its competitors such as Unacademy, Simplilearn, UpGrad, Amazon Academy, and traditional education institutes.

The company didn’t reveal the value of the deal.

HashLearn, India’s first on-demand tutoring app, is an online coaching platform for competitive exams. The app instantly connects students with tutors. Anyone can become a tutor on the app and get paid.

According to the company’s website, it offers free and paid subscriptions for students to access its content. The company claims that more than three lakh students have joined its platform since its inception.

The acquisition will strengthen Byju’s dominance in the segment where parents usually spend large amounts- on their children’s education.

The value of this deal remains undisclosed as well.

The said technology drives applications in mobility and robotics. This will Byju’s in product development and impact students’ learning experiences in a positive way. Byju’s wants to transform into a digital learning powerhouse that is focused on everything from K-12 to professional education.

BYJU’S has acquired Bengaluru-based computer vision and AR startup Whodat for an undisclosed sum. This was the seventh acquisition carried out by them this year.

GeoGebra is dynamic mathematics software for all levels of education that brings together geometry, algebra, spreadsheets, graphing, statistics and calculus in one easy-to-use package. The eight-year-old GeoGebra operates as an interactive and collaborative mathematics learning tool and reaches over 100 million students across more than 195 countries and territories.

It offers services to both enterprises as well as a philanthropic non-profit organisation. The services provided to NGOs are for free. Byju’s said it welcomes the social mission of GeoGebra and acknowledges its importance for mathematics education worldwide.

BYJU’S said GeoGebra’s current apps and web services will continue to be available for free post the acquisition.  Further, they also said that it will continue to operate as an independent unit within the Byju’s group.

With this acquisition BYJU’S aims to integrate GeoGebra’s capabilities to enable the creation of new product offerings and learning formats to its existing mathematics portfolio. The company did not disclose the value of the deal.

Bonus: Acquisitions done by BYJU’S in 2020

WhiteHat Jr, founded in 2018, operates in the K-12 segment, teaching students to code and helping them build commercial-ready games, animations and apps using the fundamentals of coding.

According to an official statement released by Byju’s, it will make significant investments in WhiteHat Jr’s technology platform, product innovation while expanding the teacher base to cater to demand from new markets. Bajaj will continue to lead and scale this business in India and the US.

BUYJU’S had acquired WhiteHat Jr in a $300 million all-cash transaction in August 2020. This acquisition will now allow Byju’s to launch coding to children, a niche, but fast-growing segment amongst the K-12 space in the broader edtech sector.

Byju’s has acquired Osmo, a maker of educational games, for $120 million. This was its first-ever purchase of a US company in the year 2019 to increase its footprint in foreign markets.

“Our partnership with Osmo will help kids acquire a love for learning at an early age by introducing ‘play-based learning’. Together with Osmo, we have the critical elements needed to build an unprecedented library of engaging and entertaining educational content for a global pre-K-12 student audience,” Raveendran said in a statement.

This bolstered Byju’s computer vision technology capabilities, which has helped the company create a more hands-on learning experience on its platform.

According to KPMG’s Online education in India: 2021 report, the Ed-tech industry of India could soon be worth $1.96 Billion. The answer going forward is a combination of both physical and digital classrooms- a hybrid learning.

BYJU’S has the goal to become one of the largest players in the space not only in India but also in the US, with a target to hit revenues of $1 billion in the next three years. It is also actively looking to enter newer international geographies, and recently set foot in Latin America and South-East Asian markets with the launch of its online tutoring platform, Byju’s Future School.

Test prep is a big segment within the entire education space in India in which BYJU’S has made a strong presence through these acquisitions.

BYJU’S aims to provide quality education to students through its online learning programs. Each of the companies acquired BYJU’S has brought unique value to their content. That’s all for this post on “Acquisitions done by BYJU’S in 2021”. Let us know what you think in the comments below. Happy Reading!