Adani Vs Ambani – The Battle For The Crown Of The Richest! 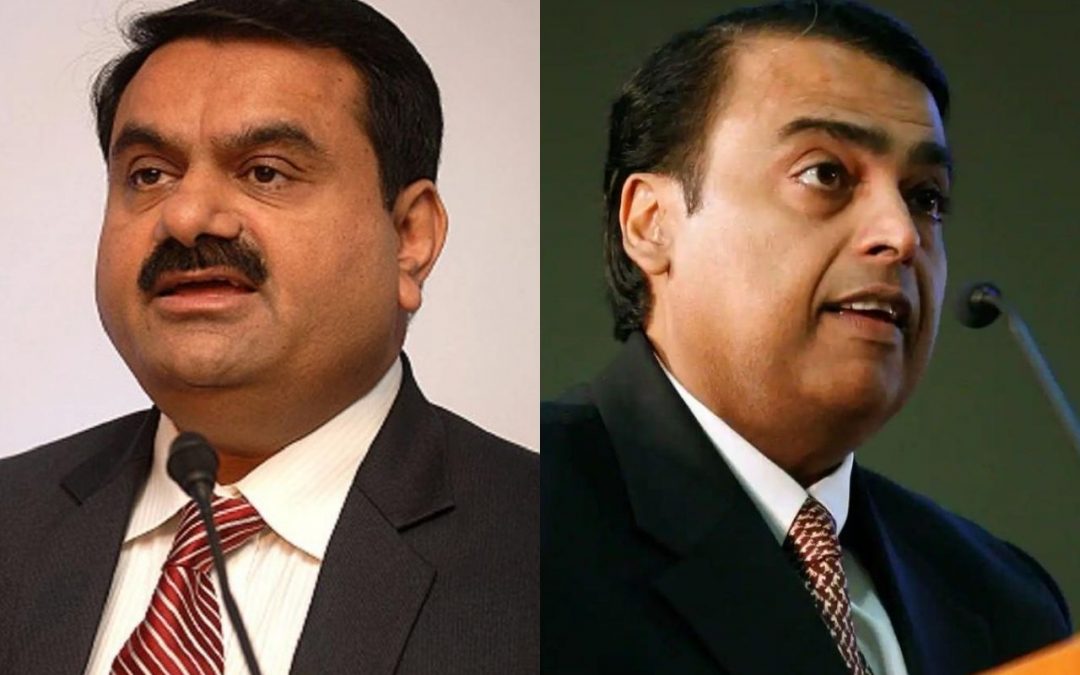 Adani Vs Ambani: Two of the biggest business tycoons in India, Mukesh Ambani and Gautam Adani have been in rivalry for India’s richest for over a decade now, with Ambani winning most of the duels! But luckily for Adani, the tides have changed post the pandemic.

In this article, we take a closer look at not only their personal life but also their businesses. Keep reading to find out more!

Gautam Shantilal Adani is an Indian billionaire industrialist and philanthropist. He is the chairman and founder of the Adani Group.

He is also the president of the Adani Foundation. As of April 2022, his net worth stands at $103.2 Billion making him the 2nd richest man in India and the 11th richest person in the world.

Unlike Mukesh Ambani who was born into a business family, Gautam Adani has his fair share of hardships before becoming one of the richest men in Asia. His father was a small textile merchant.

He enrolled for a bachelor’s degree in commerce at Gujarat University but dropped out after the second year.

He was keen on learning more about the business world, just not his father’s textile business. That is one of the reasons he moved to Mumbai as a teenager to work as a diamond sorter for Mahendra Brothers.

In 1981, his brother Mahasukhbhai Adani bought a plastics unit in Ahmedabad and invited him to manage the operations. This was the turning point in his career.

It started with dealing in agricultural and power commodities and now has diversified into resources, logistics, energy, defense, and aerospace.

According to Forbes, his net worth is estimated at around US$101.1 Billion as of April 2022 making him the richest person in India and the 10th richest man in the world.

The backward integration journey of RIL started after the Son of Dhirubhai Ambani joined the company.

From textiles to polyester fibers and further onto petrochemicals and petroleum refining, and going upstream into oil and gas exploration and production.

Eventually, a feud arose between them to take over complete control of the business. That is when their mother, Kokilaben Ambani decided to split Reliance’s assets via a non-competition agreement (2006–10).

Post this Mukesh assumed control of the gas, oil, and petrochemicals units as RIL under the umbrella of the Reliance Group.

Overview Of Adani Group Of Business

Adani Group was founded by Gautam Adani in 1988 as a commodity trading business, with the flagship company Adani Enterprises Limited. Since then this Indian multinational conglomerate has diversified into multiple segments.

In each of its business areas, the Group has established leadership positions in India. In Fact, in April 2021, Adani Group became the third Indian conglomerate to cross $100 billion in market capitalization.

Overview Of Ambani Group Of Business

Reliance Industries Ltd is a diversified Fortune 500 company and the largest private-sector corporation in India. The Ambani group only has one listed company that is trading on the Indian stock exchanges.

RIL has a market capitalization of Rs 17,78,382 Crores. The company has subsidiaries through which it operates in various segments such as Retail, Digital Services, Media and Entertainment, and chemicals.

Gautam Adani has declared that the company will make an investment of more than $20 Billion in its renewable energy business over the next decade.

The company already has an established presence in the space with more than 20,284 MW of Renewable Energy in its Portfolio.

Soon after, Mukesh Ambani also announced that Reliance is also planning to invest $10 billion in the new energy business over the next three years.

Of this, $8 billion is to be invested in four gigafactories, storage of intermittent energy, production of green hydrogen, and fuel cell factory. The balance of $2 billion is for the value chain, partnerships, and future tech.

The Adani group is recently discussing ideas of buying a stake in Saudi Aramco, which is the world’s largest oil exporter, from the country’s Public Investment Fund (PIF).

The deal could possibly lead to a broader tie-up or an asset swap deal. In exchange, the Adani group may also offer the PIF an opportunity to invest in infrastructure in India.

This is not the first time Saudi Aramco has engaged in negotiations. The Saudi petroleum giant spent more than two years negotiating a potential deal worth between $20 billion to $25 billion for a 20% stake in RIL.

Adani wanted to enter petrochemicals by putting up a $4 billion acrylics complex near his Mundra port in Gujarat in collaboration with BASF SE, Borealis AG, and Abu Dhabi National Oil Co., or Adnoc. But the outbreak of Covid-19 halted the plan.

Experts are claiming this to be an attempt made by the logistics leader to disrupt the already established moat of Reliance Industries in the Oil industry.

In this article, we looked at the rivalry between two of the richest men in India, Adani Vs Ambani. Both the business magnets are not only competing with each other in terms of wealth but also in the various segments of their business.

It will be interesting to see who becomes the ultimate leader to rule Indian Business. That’s all for this post. Happy reading! Who is your favorite? Let us know in the comments below!