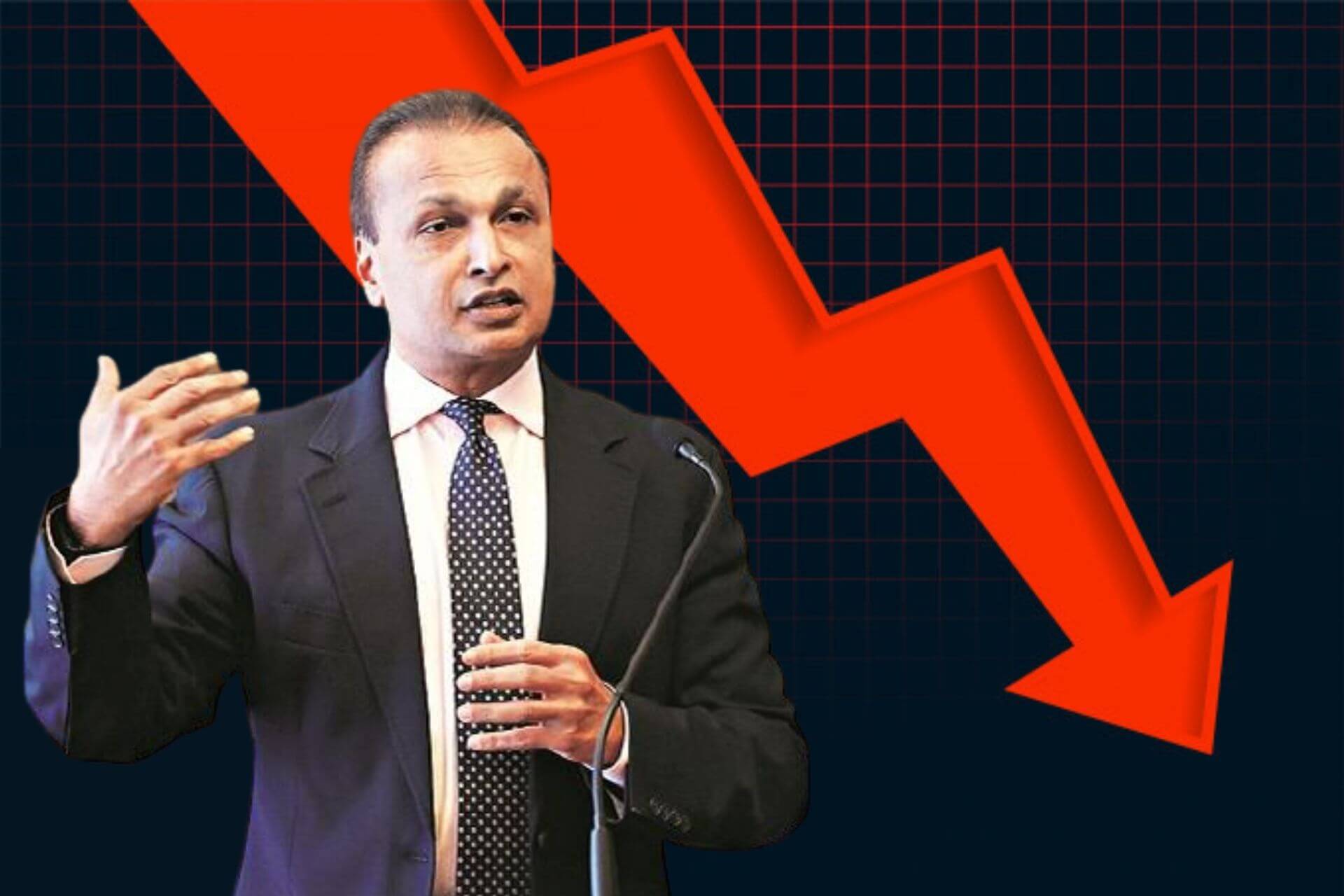 The Anil Ambani Story – Riches to Rags Journey: Do you think that it’s possible to lose wealth worth $42 billion? Yet somehow Anil Ambani who once was once one of the richest men in the world has managed to do just that. Today we find out how Anil Ambani managed to become arguably the greatest destroyer of wealth in the last 100 years and become the prime example of riches to rags.

Anil Ambani was once the sixth richest person in the world after inheriting his wealth and the chairman of the Reliance Anil Dhirubhai Ambani Group ( Reliance ADAG). Some of the major companies that constituted the group included Reliance Communications, Reliance Capital, Reliance Power, Reliance Infrastructure, Reliance Naval, etc.  The wealth of the Ambani family started with his father Dhirubhai Ambani.

The tycoon started out as a gas station attendant in Yemen and is the perfect example of a Rags to Riches story. He went on to become the richest man India had ever seen and is the reason behind both Anil and Mukesh’s initial success. Today, we cover the Anil Ambani Story. Let’s get started.

Sadly Dhirubhai passed away after suffering from a stroke in 2002. This led to complications in the Ambani family dynamics as he died without a will. The brothers at first seemed to cooperate. Anil even stated, “two bodies, one mind”. The Reliance conglomerate which was then an Rs.28,000 crore business was headed by Mukesh as its chairman and Anil as Managing Director. It however didn’t take much time for the news to spill out that there were strains in the relationship between the two brothers. Mukesh viewed himself as the undisputed leader of the conglomerate being the eldest scion whereas Anil considered himself to be equal. 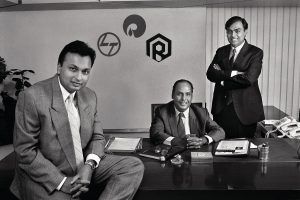 The quarrel escalated to a point where each was taking decisions for the company without consulting the other. Anil went on to announce a power project and Mukesh restructured the entities that managed the shares of the family in the company. Both these decisions were taken without the notice to the other. Two years after their father’s death the board under Mukesh passed a resolution. It indicated that Anil would henceforth be “under the overall authority of the chairman” which was held by Mukesh.

Anil saw this public humiliation as the last straw which led to an open feud within the company. Anil would refuse to sign financial statements. The directors from a subsidiary run by Anil turned in their resignation as an act of solidarity. It eventually reached a stage where the Finance Minister of the country pleaded with the brothers to make amends. 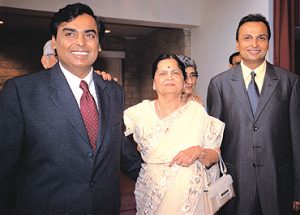 Kokilaben at this point had seen enough and decided to intervene. She realized there was only one way out that included splitting the company between the brothers. Anil received the telecom, power generation, financial service, and infrastructure business. This pegged Anil’s net worth at $4.5 billion. Mukesh, on the other hand, received oil and gas, petrochemical, refining, and manufacturing business. Mukesh was now worth $4.9 billion.

The split also included a non-compete clause between the two brothers in order to maintain the truce. The clause forbade the brothers from entering each other’s industries.

The years that followed were favorable towards Anil Ambani. By 2007 he was worth $45 billion and was conferred with many business awards. This increase in wealth was thanks to him receiving Reliance’s crown jewel in the split i.e. Reliance Communications. His wealth was also evident in his lifestyle. It was under Anil that the country saw India’s largest IPO of Reliance Power in 2008 which was subscribed in just 60 seconds. This was the fastest in the Indian Capital market history. 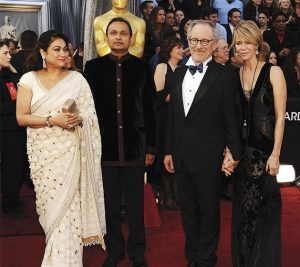 Anil’s Reliance Infrastructure also built Mumbai’s first metro line. Anil also invested a portion of his enormous wealth in Steven Spielbergs DreamWork Pictures. The joint venture is known to have produced films like Lincoln which won an Academy Award and The Fifth Estate, a film about Wikileaks’ Julian Assange. Thanks to this partnership we soon saw the legendary director visiting BTown. At times the Mumbai elites were invited to his home for a screening of upcoming releases. Mukesh however was not seen among the guests.

Anil’s downfall began during the financial crisis of 2008. Reliance Power in its IPO had raised Rs. 11,563 crores. This was supposed to be used to fulfill Anil’s ambitious 13 projects of gas, coal, and hydropower. These projects required the availability of gas at reasonable rates. The 2008 environment did not enable this dream. Authorities now mandated lower electricity rates. This now meant that around Rs.1.2 lakh crores were stuck in these projects.

Mukesh however saw an opportunity here. He offered a supply of natural gas provided that the non-compete clause was annulled. Anil agreed and this allowed him to make his failing power plants viable. This however allowed Mukesh to enter industries Anil existed in, including the communication sector.

Reliance Communication the crown jewel made up 66% of Anil Ambani’s wealth. RCom however had a technological limitation. When it was set up in 2002 it chose CDMA ( Code Division Multiple Access). Other network providers like Airtel and Hutch provided GSM(Global System for Mobile communications). Anil had dreamt of creating wonders with the CDMA technology but it was unfortunately limited to only 2G and 3G. This meant that when 4G arrived he would have to once again build the mobile network from scratch. In the midst of this Anil acquired GLT Infra in his plans to expand 3G and set up a sister company for an undersea cable network.

Mukesh on the other hand began pouring money he earned from his oil and petrochemical business into his upcoming mobile network. This was a huge bet as investors saw him pour money for over 5 years. 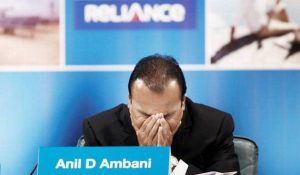 Eventually, Mukesh launched Jio with 4G. The poor management of the company, its inability to provide 4G, and the price war that followed led to RCom’s downfall. In order to keep the capital-intensive company’s hopes alive, Anil had only one option i.e. take on debt. By 2016 the company was debt-ridden.

In 2017 Anil realized that his company was out of the market and he couldn’t afford a 4G makeover. He decided to sell the wireless business to Aircel. The infrastructure i.e. the cell towers would be sold to a Canadian company called Brookfield Group. Unfortunately both the deals fell through. Aircel itself went bankrupt and the failure t execute this deal led to the fallout of the Brookfield deal. If Anil had seen the red flags hoisted by the CDMA technology he would’ve been able to sell off the business quicker in order to avoid losses.

The biggest challenge here however was posed by Jio. This however was the biggest and one of the riskiest bets placed by Mukesh. Its entry with 4G immediately saw RCom lose 8 crore customers. RCom shut its wireless operation in 2017. In 2019 RCom’s undersea cable company filed for bankruptcy in the US.

Another decision that worked against Anil was his move to venture into the Defense sector. He had two companies in the business – Reliance Defence Ltd. and Reliance Naval & Engineering Ltd. He bought Pipavav Defense which already had a debt of around Rs. 7000 crores. The company was hard o turnaround and eventually was admitted to insolvency proceedings of NCLT. Reliance Defense Ltd on the other hand was embroiled in accusations of a scam. The Indian National Congress accused PM Narendra Modi of favoring Anil’s company over HAL in a fighter aircraft (Dassault Rafale) deal worth Rs. 58,000 crores. Allegations were made that Reliance Defence went onto become the biggest beneficiary in the deal.

To add to the controversy one of Anil’s businesses partly financed a French Film in which the former French President Hollande’s then-partner had acted in, around the same time the deal was finalized.

The default on loans from Reliance had adverse effects in an already ailing economy. One example is that of Yes Bank which had significant exposure to Anil Ambani’s companies. Another such example has been that of Franklin Templeton. Franklin Templeton had secured Non-Convertible Debentures in 3 of ADAG companies. They eventually did not sell the pledged securities and would 6 debt funds affecting 300,000 investors.

In 2019 Anil faced a lawsuit for non-payment of personally guaranteed debt that Reliance owed to Ericsson. In an attempt to diffuse the situation Anil Ambani offered to settle the matter outside court. But Anil has not been able to come up with the amount owed to the creditors even after signing the settlement. The court gave him a month to come up with Rs. 5.5 crore. At the time Anil and Mukesh entered into a deal where RCom would be sold to JIo, but this too was scrapped as the Telecom department asked Jio to take responsibility for RCom’s dues. Eventually, Mukesh agreed to bail out Anil by paying $77 million

It was reported by Bloomberg that Mukesh had made Anil ‘beg’ as the deadline neared before helping him out. The deal however did not come free of cost as Anil had to still surrender a pair of 99-year-old leases on office buildings in Mumbai. 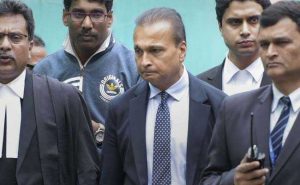 Anil Ambani has also defaulted on loans taken from three Chinese Banks – Industrial and Commercial Bank of China Ltd Mumbai Branch, China Development Bank, and Exim Bank of China. He is said to owe them $ 700 million after accounting for interest. On being asked to pay $ 100 million into court in the UK Anil stated “The current value of my shareholdings is down to approximately $82.4 million (approximately Rs 589 crore) and my net worth is zero after taking into account my liabilities. In summary, I do not hold any meaningful assets which can be liquidated.”. The banks found this hard to believe as Anil was still surrounded by his son, mother, and elder brother who are billionaires.

Although both the brothers started out with similar capital, Mukesh Ambani is currently worth over $80 billion and is arguable the most powerful man in India apart from PM Narendra Modi. Anil on the other hand has not only managed to achieve negative growth but claims to be in deficit. Observers have stated that although external factors were involved reckless growth plans and unchecked ambition too had a role to play.

Anil Ambani is currently still battling courts over the settlement of his dues. Apart from this he still maintains his fitness standards and it is rumored that he has come out more religious out of this whole ordeal and finds material success hollow when compared to spiritual fulfillment.