Bajaj Auto Vs Hero MotoCorp – Who Will Rule the Indian Two Wheeler Market? 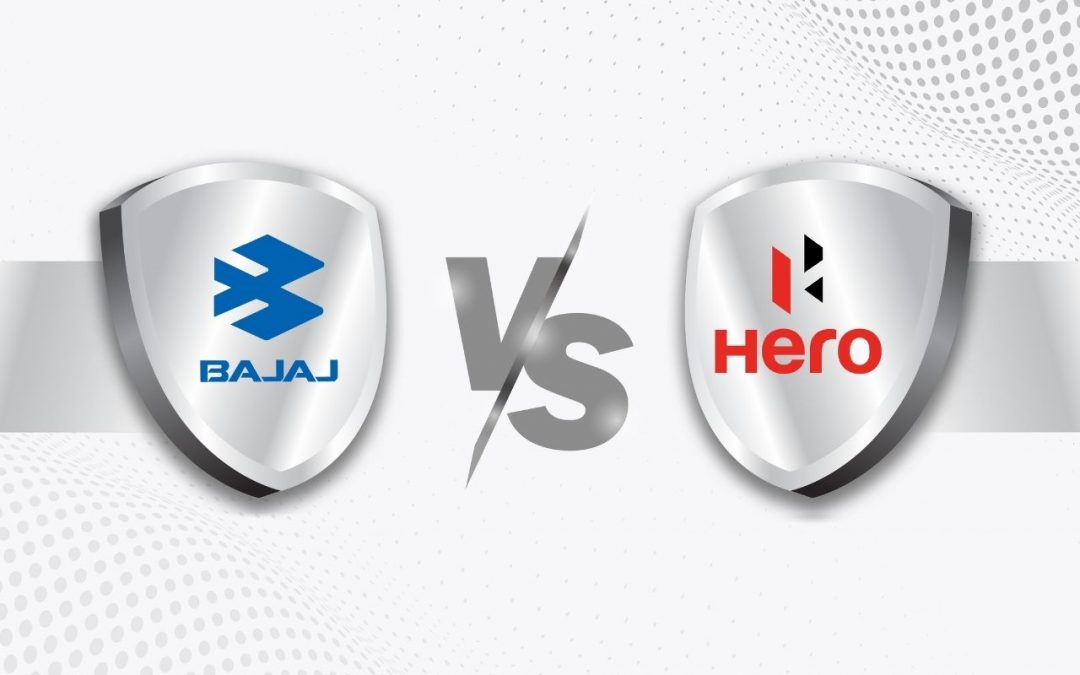 Bajaj Auto Vs Hero MotoCorp: Growing up in India, the sight of the family scooter or motorcycle brings a feeling of sentimentality that cannot be replaced.

From the daily rides to school, to owning your own vehicle after getting your first job, a motorcycle or scooter holds a special place in the hearts of every Indian and that emotion is passed on from one generation to another.

As individuals we view two wheeler as a part of the family and attach a value to it that is beyond monetary. Today we’re going to look at the two wheeler market in India and two of its key market players – Bajaj Auto & Hero MotoCorp.

Keep reading to find out more about Bajaj Auto Vs Hero MotoCorp – Who Will Be the King of the Indian Two-Wheeler Industry?

About The Industry – Bajaj Auto Vs Hero MotoCorp

The Indian two wheeler market is witnessing a slump in growth since the initial days of the pandemic, with a 14% YoY drop in sales volume from 2019-20.

However there has been a slight upturn in the industry. Sales volumes are slowly picking up and the overall growth of the Indian electric two wheeler market as well.

Drop in sales volume is due to multiple factors like Covid-19, supply chain disruption, rising fuel prices, new BS-VI norms, and the rapid growth in the EV segment.

The Indian motorcycle market also saw a 10% growth in market share of vehicles in the 5-Speed Transmission segment in FY 2020 – 21. This refers to an increasing demand in premium motorcycles.

Some of the largest market competitors contributing to the two wheeler industry were Hero, Bajaj, TVS Motors, Honda, Suzuki and Royal Enfield.

Among them, we are going to look at the two largest competitors in India. The two wheeler brand Bajaj is the most valuable two wheeler company in the world and Hero MotoCorp, the only two wheeler listed company to achieve the milestone of one hundred million units sold.

Bajaj Auto – About the Company

Bajaj Auto Limited is a major Indian two wheeler manufacturer, founded in 1945. They are one of the top 5 competitors in manufacturing and sales in the two wheeler market segment.

Initially Bajaj Motors imported and sold two & three wheeler vehicles in India. They were granted a manufacturing license from the government of India with an agreement from Piaggio to manufacture the Vespa line of scooters in India.

They are the third largest motorcycle manufacturer in the world and second largest in India.

This achievement is credited to the fact that Bajaj Auto has made reliable motorcycles and scooters over their 70 year history.

Hero MotoCorp – About the Company

Formerly known as Hero Honda, is the largest two wheeler manufacturer in the world and enjoys a market share of 37% in its segment in India.

The company was incorporated in the year 1984 and began as a merger between Hero Cycles, and Honda, a Japanese motorcycle manufacturer.

Both companies sold two wheelers in India under the merger name Hero Honda until the year 2010 when the merger ended through a buy-out.

Hero Group bought the 26% Stake owned by the Honda Group, ending the merger between the two companies. Another 26% was bought by the Munjal family over a series of off-market transactions.

After the de-merger, Hero began exports to Latin America, West Asia and Africa, as they were no longer restricted by their previous agreement with Honda.

HMC also owns 34.5% equity stake in Ather Energy, an electric scooter start-up based in Bangalore. By July 2011, Hero was rebranded to Hero MotoCorp and has been operating under the new name ever since.

After Hero’s exit from the merger, they have ramped up production, research and development and production of motorcycles.

Throughout India it has five manufacturing facilities – Dharuhera, Neemrana, Haridwar, Halol and Gurugram. These facilities contribute to the elevated difference between sales of Hero MotoCorp and all its top competitors combined.

They have also recently announced their collaboration with American Motorcycle manufacturer Harley – Davidson which is a potential growth factor in the years to come.

Hero is also one of the few Indian manufacturers to sponsor riders for the world famous Dakar Rally. Joquim Rodrigues, C S Santosh and Sebastian Buhler represented Hero at the 2021 Dakar Rally.

Bajaj Vs. Hero – Which Stock is Outperforming the Other?

From the brief description of the two competitors, it is clear that they are both market leaders in the two wheeler segment.

Bajaj is one of the top 4 leaders in the two wheeler market segment and dominates the market in the three-wheeler segment. Currently they export to over 70 countries worldwide.

It is also the most valuable two wheeler listed company in the world with a market cap of over 107K crore. They have improved their margins and this was possible through lowering operating cost hence better operating profit and net profit.

A combination of good market share in the two wheeler segment, giving them a competitive edge in terms of sales and profitability.

Bajaj also enjoys a positive public image among its shareholders and customers due to their dedicated service and contribution to the Indian motorcycle sector.

It is also important to note that Bajaj is a segment competitor in both the two wheeler and three-wheeler automobile market.

They have a positive average ROE of 20.45% from the past three years. Average ROCE is at 27.5%. Bajaj has a low debt to equity ratio of zero, which is a positive sign for long-term investors.

Promoters have held a majority stake in the company of an average 53% over a 5 quarter period.

Net sales declined by 6.8% to Rs. 27,133 crore. Despite this reduction, it represents the third highest sales in Bajaj Auto’s history. Bajaj also has a lower exposure to scooters and mopeds which are at risk from EV based competitors.

The company has another positive aspect, which is its debt equity which stands at 0. In addition to this, the company also has high promoter holdings of 53%. Out of this, only 0.01 % is pledged.

The domestic sale of three-wheelers fell to 109,304 units. This is primarily due to a reduction in passenger three-wheeler sales across the industry on account of Covid-19.

However, they are still a market leader, accounting for 50.6% of all three-wheeler sales and 60.9% of passenger vehicle sales.

Sales volume declined by 9% during the fiscal year 2020-21 as compared to a 13% drop for the industry on account of the Covid-19 pandemic.

Hero has also achieved the remarkable milestone of having sold 100 Million motorcycles and scooters, which is the largest number of sales ever by a two wheeler manufacturer in the world.

Their debt to equity ratio is 0.02 which is a positive sign, keeping the long term investment goals into perspective. Their EPS is 129 which is slightly lower than its competitors.

Promoter holding is steady at an average of 34% over a 5-quarter period, with zero pledged shares.

Hero has lost market share in the past 11 out 12 years since its demerger from Japanese manufacturer Honda, despite contributing majorly to the two-wheeler segment.

Both Automobile Manufacturers are competitive and have sustained through the previous volatile years and are quite competitive in terms of sales and future prospects.

Bajaj comes out on top in terms of EPS, operating profit and overall growth in market share. Hero and Bajaj Auto both have similar P/E ratios, below the industry average.

This is also an advantage in their three wheeler market segment, where Bajaj is already a market leader. Adding to this is the fact that the surge in EV start-ups in the moped and scooter sector has had lesser impact on Bajaj.

Their growth is credited to the motorcycle segment of its two-wheeler arm. Bajaj also has its own entry into the EV scooter segment through its rebranded Chetak model.

Hero being the largest manufacturer in the world by sales volume has not contributed as expected to their overall growth.

Their achievement is remarkable and record breaking, but they are yet to have a foothold in the premium two wheeler segment.

Other manufacturers have already launched an EV line in preparation for the future demands of the Indian market. Will they be able to pick up the pace and meet customers’ demands in time?