Companies Under Aditya Birla Group – A Look Inside The Conglomerate! 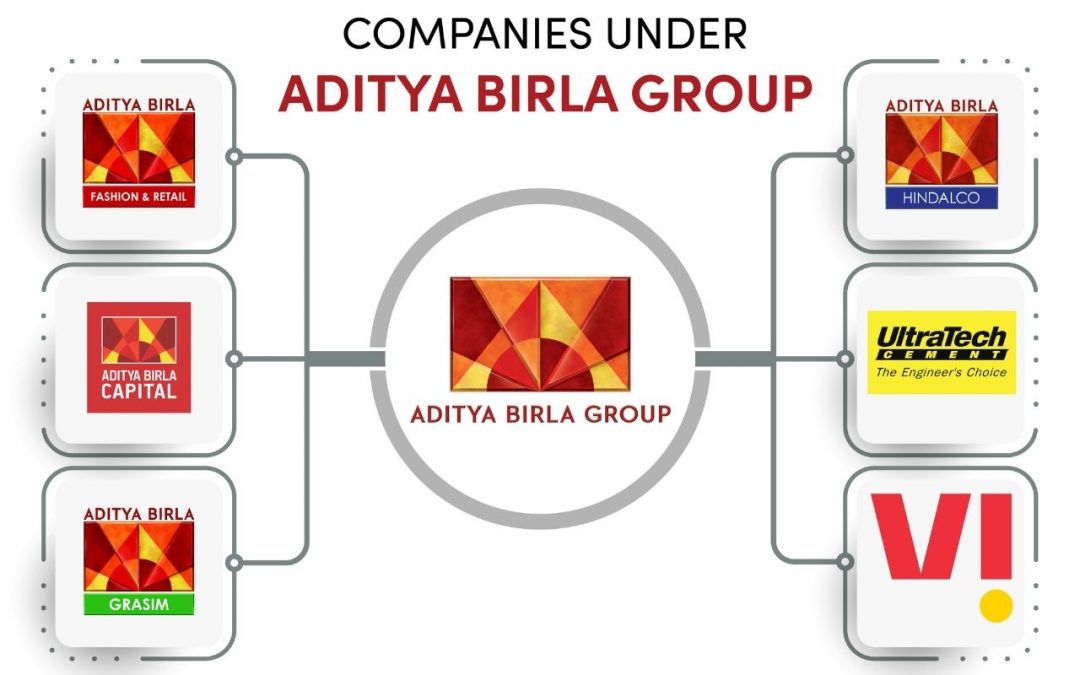 Companies Under Aditya Birla Group: There have been many visionaries in the history of corporate India who not only shaped various industries but also the economy as a whole.

One of them was Shri Ghanshyam Das Birla. He is known to be the great architect of India’s industrial growth. He laid the foundation for what today is one of the largest industrial conglomerates in the country.

In this article, we will take a look at the companies under the Aditya Birla Group.

In the 19th century, the foundations of the Aditya Birla group were laid by  Seth Shiv Narayan Birla. He began his journey by trading cotton. Post this the group saw tremendous growth through the 1850s.

In the early 20th century, Mr. Ghanshyam Das Birla, who is also known to be the group’s founding father, set up industries in various sectors. That includes textiles and fiber, aluminium, cement, and chemicals.

The Aditya Birla group is one of the largest corporate houses in India and is often referred to as the first truly multinational corporation in the country.

The Aditya Birla group is an Indian multinational conglomerate that operates in more than 36 countries. The group is engaged in sectors ranging from Textiles and metals to telecommunication.

Here are some of the listed companies under the group.

The company delivered a strong performance in FY21. The customer base saw a strong growth of 22% YOY with the total tally reaching 24 million. Their revenue grew 14% year-on-year to Rs 20,447 Cr.

The consolidated profit after tax reflected a growth of 22% year-on-year to Rs 1,127 Cr.

The company saw a rise of over 60% in its revenue from the year before as it recorded total revenue of Rs 5181 Cr in FY21. However, the company reported a net loss which stood at Rs 736 Crafter tax.

Incorporated in 1947, Grasim Industries Limited started as a textiles manufacturer in India. Today it is a leading global producer of Viscose Staple Fibre, the largest Chlor-Alkali, Linen, and Insulators player in India.

The company reported a revenue of Rs ₹76,398 Cr and a Profit After Tax (PAT) of Rs 4,305 Cr in FY21. The company also plans to foray into the Paint sector as its long-term strategy for growth.

Incorporated in 1958, Hindalco Industries Limited is an Indian aluminium and copper manufacturing company. It is one of the biggest producers of primary aluminium in Asia.

It is also counted at the top among the largest aluminium rolling companies in the world.

The company registered total revenue of Rs 42,701 cr FY21 which was up 6% from the previous year. The Profit before Tax (PAT) stood at Rs 1,567 cr, up by 54% compared to the previous year due to higher EBITDA.

UltraTech Cement Limited is India’s largest cement selling brand. It ranks 1st in the white cement and cement-based Putty category based on its sales volume.

It has a 21% capacity share in India’s grey cement industry. Around 1.7 Billion bags of cement are produced every year.

It is one of the leading telecommunication operators in India offering voice, data, business services, and other Value-Added Services (“VAS”), including Short Messaging Services, digital services, IoT, etc.

In this article, we looked at one of the biggest business groups in India which is not only making profits in multiple sectors but also helping the country grow by providing employment and returns to its investors.

Going forward, the company has strategies to expand into new territories and gain significant market share. That’s all for the post on companies under Aditya Birla Group.

Have you invested in any of these companies? Let us know in the comments below.