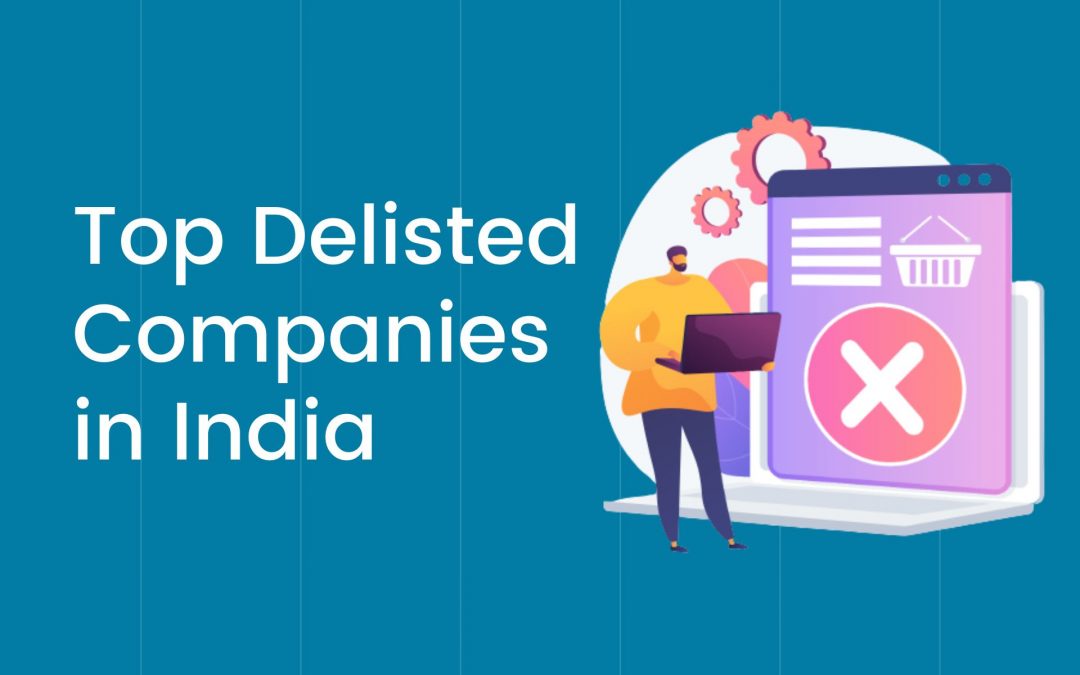 Delisted Companies in India: Imagine that you are a shareholder of a company holding 1000 shares and these add up to Rs. 50,000. The next day, you see that the value of your holding is shown as 0, and you have no clue what caused this.

All you know is that this is not a technical glitch from your stock broker’s end. Later, you learn that the company has been delisted, and it had you worried. Now lets get out of this nightmare! A company getting delisted has many signs and investors are kept informed beforehand.

But have you ever wondered if any companies have been delisted in India. In this article we take a look at some of the delisted companies in India. Keep Reading to find out as you may be left in shock!

Many of us have heard of companies getting listed on the stock exchange, by means of an IPO(Initial Public Offer), but the reverse is also possible, i.e. a company can also get delisted. When a company gets delisted, its shares are removed from the stock exchanges and they cannot be bought or sold on these exchanges.

However, you are still the shareholder of those shares. Though these shares cannot be sold on the stock exchange, there are exit strategies available. Shares do not get delisted just like that, It takes a while and the stakeholders are informed about it. If the company is big, then literally very news channel would cover it.

Smaller companies may not find as much media coverage, but they do send intimation to their shareholders informing them about the same. Once a stock is delisted from the stock exchanges, it can still be sold on the OTC (Over the Counter) markets.

Non- compliance or bankruptcy might cause trouble, but otherwise companies usually buyback these shares before they get delisted, so do not worry!

Why Do Companies Get Delisted in India?

A company’s shares get delisted for reasons like failure to comply with the regulatory requirements of the stock exchange, insufficient market capitalization when a company files bankruptcy when it gets amalgamated when it wants to restructure its business and so on. This may be voluntary or involuntary.

An ongoing list of companies that get delisted on the NSE and BSE is readily available on their respective websites. Here’s a list of a few delisted companies in India and the reason why they got delisted:

The company got delisted from the stock exchanges on 20th January 2003 due to non compliance with clause 21(3)(a) of the SEBI(SAST) Regulations 1997, i.e., the public’s shareholding fell below 10%. Cadbury UK, which is now owned by Kraft Foods wanted to own 100% of the company to benefit from the fast growing market and they applied to delist the shares. Since the promoters holding exceeded 90%, they could pass a resolution for a compulsory buy back.

Kodak India Ltd. got delisted from the stock exchanges from 23rd may 2003 due to non compliance with clause 21(3)(a) of the SEBI(SAST) Regulations 1997, which are SEBI’s takeover code norms. It provided an exit option to existing shareholders at Rs. 350 per share.

Kodak UK and Eastman Kodak held a whopping 93.96% stake in Kodak India at that time. Since the public holding fell below 10% as per SEBI’s norms, it got delisted.

Otis Elevator Company (India) Ltd. got delisted from the NSE as well as BSE on 16th June 2003 due to Non compliance with clause 21(3)(a) of the SEBI(SAST) Regulations 1997. As per a NSE circular, the public shareholding of the company started falling below 10% of the equity share capital and the company requested the exchange for delisting.

Alembic Glass Industries Ltd. got delisted on 5th June 2008 as per the SEBI (Delisting of Securities) Guidelines 2007. Minority investors were kept out and the promoters shareholding in the company went on increasing, after which it got delisted. In the year 2006, the promoters held a hefty 71% of the total holdings in the company.

Against the will of the minority shareholders, it merged with an obscure, loss-making group company Shreno, after which its shareholding increased to 89%.

After expressing their inability to bring public holding in TVS Finance to atleast 25%, the promoters of the company proposed to buy back all of its outstanding equity shares and delist the company. It got delisted from the BSE on 5th June 2008 as per SEBI (Delisting of Securities) Guidelines 2007.

It had an accumulated loss of Rs. 99 crore as on December 31st, 2007. The company wanted to strengthen the net owned funds position and increase the long term funds position.

Ray Ban Sun Optics India Ltd. got delisted on 22nd October 2008 as per SEBI (Delisting of Securities) Guidelines 2012. Ray Ban Indian Holdings, which held 70.55 percent in the Indian company, bought about 7.2 million shares, or 29.46 percent, at 140 rupees per share.

Reliance Media Works Limited got voluntarily delisted from the BSE on 6th May 2014 as per SEBI (Delisting of Equity Shares) Regulations 2009. In March 2014, the promoters of the company had offered to buy back shares worth Rs. 251 crores from the public shareholders as a part of plans to delist it.

The shares were successfully tendered in the delisting offer ar Rs. 61 a piece, which was at a premium of Rs. 25.39 from the floor price.

Panasonic Home Appliances India Company Ltd. got delisted on 24th April 2015 from the BSE, as per SEBI (Delisting of Equity Shares) Regulations 2009. Its parent company acquired over 16.14 lakh shares from its shareholders at Rs. 380 per share. With this additional stake, it held 90.64% in the company, after which it applied for the company’s delisting.

Deccan Chronicle Holdings Ltd. got compulsorily delisted from the BSE on 23rd August 2017. Canara Bank had filed insolvency proceedings against it for defaulting on loans. Both the NSE and BSE had suspended trading in the DCHL scrip in January 2013.

The promoters of the company were required to purchase the shares of the company from the public shareholders as per a fair value that was determined by an independent valuer appointed by the exchange (BSE).

A company may get delisted from stock exchanges due to various reasons that may be good or bad from the perspective of the shareholders. Some of them might even get relisted.

In general, publicly traded companies, i.e., companies that are listed on stock exchanges have more compliances and rules that are applicable to them. Getting delisted might help them to fall under fewer compliances and regulations that might benefit their financial and operational stability in a few cases. Delisting isn’t all that bad, according to the reason.

Shareholders need to keep themselves updated with the latest developments about the companies in their portfolio and then decide further course of action. Its always better to have an exit strategy handy, even before buying shares of a company.

That’s all for this post. Do you still wish these companies were still listed on the stock exchange. Let us know in the comments below. Happy Investing!