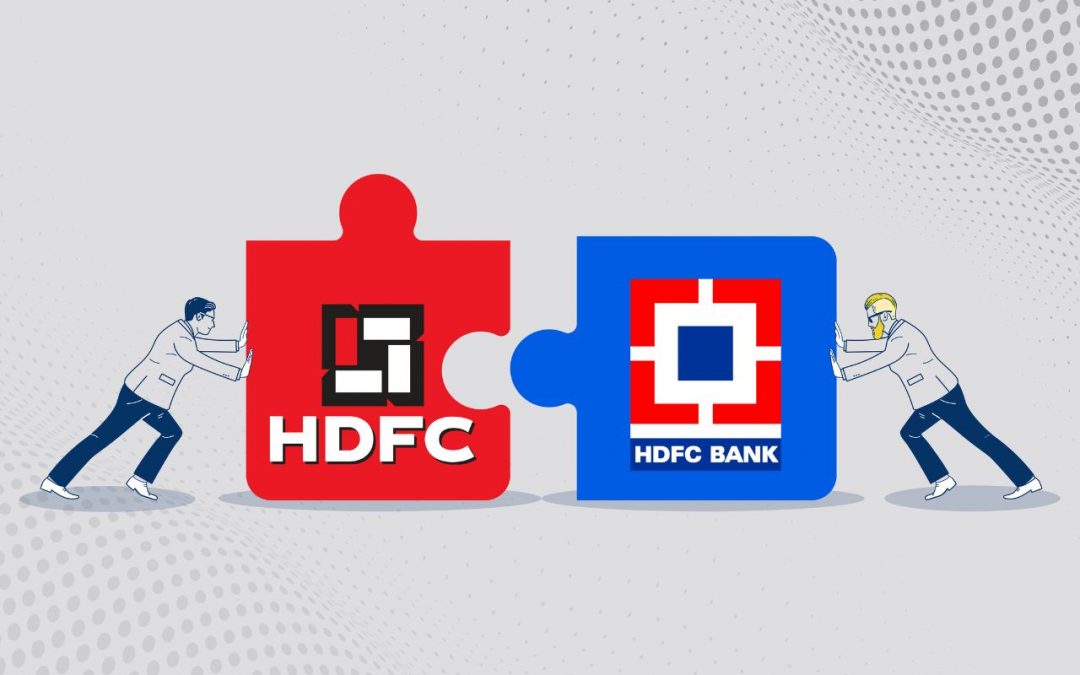 The biggest merger in the corporate history of India is about to take place. It came as a surprise on April 4, 2022, when HDFC and HDFC bank announced their mega-merger. In this article, we will try to decode the mega-merger of HDFC and HDFC bank. Keep reading to find out!

HDFC was formed in 1977. It was established with the primary objective of meeting a social need of encouraging homeownership by providing long-term finance to households. It was first promoted by the Industrial Credit and Investment Corporation of India (ICICI).

Today it is a leading provider of Housing Finance in India. It also has a presence in banking, life and general insurance, asset management, venture capital, realty, education, deposits, and education loans.

HDFC Bank Ltd was set up in the year 1994 and is now one of  India’s largest private sector banks. It offers a wide range of commercial and transactional banking services and treasury products to wholesale and retail customers.

It was only recently that the boards of HDFC and HDFC bank cleared a $40 Billion amalgamation. As per the deal, the bank will be merged with its parent company ie HDFC. Over the last few years, HDFC Bank has grown in terms of size and valuation.

The penetration of HDFC bank is significantly lesser in the housing market as compared to its peers. The merger with HDFC, which already has an established presence in that space will add to the success of the merger.

On completion of the merger, HDFC will acquire a 41% stake in HDFC Bank and all other subsidiaries of the housing finance leader.

How Will The Merger Progress?

HDFC Investments and HFDC Holding will first merge with their parent company i.e HDFC. After the successful mergers of these companies, HDFC will be merged with its banking arm HDFC Bank.

The merger will add to the existing leadership position of the company. The merged company will most likely become the 63rd most valued company in the world with a valuation of &190 Billion which is more than some big names like Morgan Stanely with $153 Billion and HSBC with $140 Billion in valuation.

Apart from that, the combined entity will have the second-largest network of branches and ATMs in the country. It will have approximately 17000 ATMs and more than 7000 branches nationwide.

Loans and deposits form a large part of the balance sheet of any banking company. Post the merger, the company will have the second-highest number of deposits and loans in India. It will have around 17.9 lakh crores worth of combined advance and 16 lakhs Crores worth of deposits.

What Happens To The Shareholders?

What Do Experts Have To Say About The Merger?

Jyoti Roy, DVP- Equity Strategist, Angel One Ltd., “The merger between HDFC and HDFC Bank is a positive development for the HDFC group.

The deal is EPS and BV accretive by 4% and 8% respectively for HDFC Bank on a pro forma basis and is therefore value accretive for existing shareholders of HDFC bank. This will mitigate single product risk for HDFC Ltd. and also provide it access to low-cost CASA deposits.”

S&P Global Ratings expects the merger to improve the ability of the merged bank to raise funds at competitive rates. However, they also noted that the profitability of the merged entity could be affected in the short term due to the statutory reserve requirements and priority sector lending regulations.

Jefferies noted that the merger will allow them to have a better scope for cross-selling across customers. The merger will also open a 700 basis point headroom for foreign investors which is a positive signal, it added.

Recently, RBI governor Shaktikanta Das said the regulator has received a proposal from Housing Development Finance Corp and HDFC Bank on the merger deal and it is being examined.

As per the officials of the Bank, the deal is subject to regulatory approvals and is expected to be completed by the second or third quarter of the next financial year starting April 2023.

Both experts and investors are eager to get more information to see how the merger will take shape. That’s all for this post on HDFC and HDFC Bank decoded. Happy Investing!

What do you think about the merger? Let us know in the comments below.