What is Insider Trading & What Makes it Illegal? 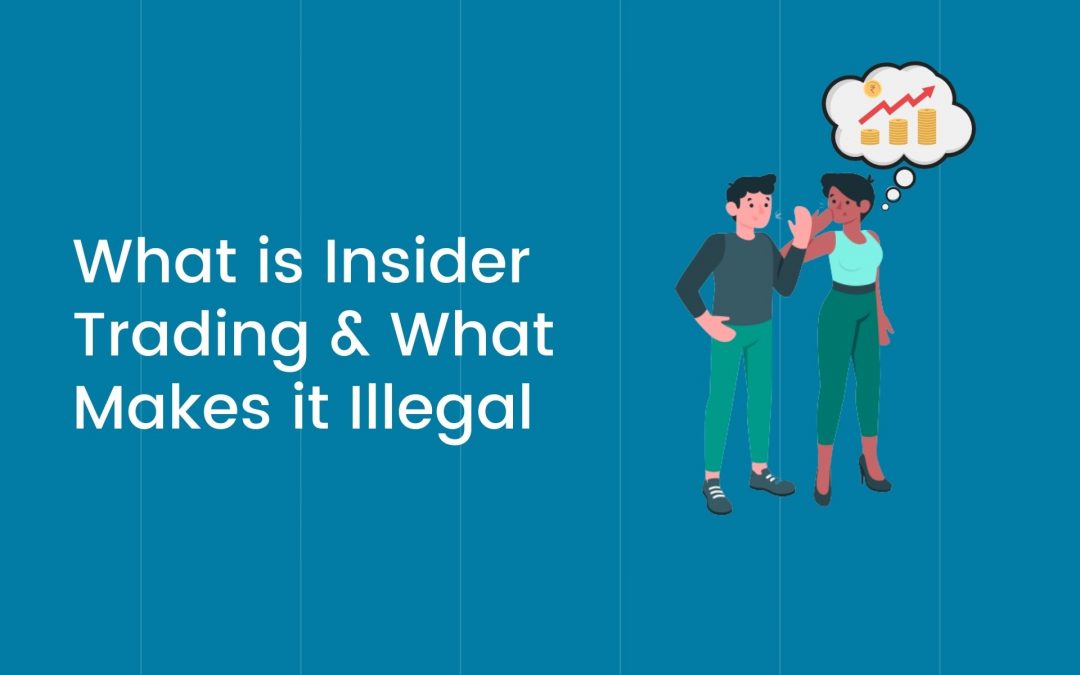 Understanding Insider Trading and its implications: Since the time the first stock exchange was established in the sixteenth century, a lot many people have tried different unethical ways to make money from it. Although a few are able to fool the market and make sustainable profits, however, most get caught by the governing bodies.

One such fraud on which most of the regulatory bodies keep an eagle eye is “Insider’s Trading”. In this article, we are going to discuss what exactly is Insider trading, why it is illegal, and how you can protect yourself from it. Let’s get started!

What is Insider Trading?

In insider trading people who have access to sensitive private information take advantage of investors who are oblivious to these facts. Insider trading refers to trades made based on material price-sensitive non-public information about the company.

Insider Trading in India is governed by the SEBI Act of 1992. Any individual who is proved guilty of insider trading can be imprisoned for a maximum of 5 years and fined between Rs. 5 lakh to Rs. 25 crores or 3 times of the profit made whichever is higher. The rules governing such trades and the degree of enforcement vary significantly from country to country.

What Forms a Part of Insider Trading?

The timing when the person in question makes the trade is also important. If the information in question is still non-public when the buy/sell of shares takes place it constitutes insider trading.

It is also important to note that if the person accused of insider trading is linked to someone within the company or someone who is associated with the company, then both can be prosecuted.

Case 2: A person overhears material information at the cafeteria from employees of a company. He then goes on to profit based on this information. As long as he has no connection to the employees of the company he is not guilty of insider trading.

Case 3: An employee of a company enters into a disinvestment plan with his broker. According to this plan, he would sell his stake in the company over regular intervals over a period of one year. After 9 months the employee is made available with some material non-public information.

According to this material information, the employee would make a loss if the shares are held by him. In this case, as long as the employee can prove his trades were part of a preexisting plan he can be acquitted of the insider trading charges.

Unfortunately enough at times, those accused of insider trading make use of ‘Case 2’ and ‘Case 3’ in their defense. Individuals who have brokers trading on behalf of them also claim that they had no idea of the trades taking place as they were acted on by the broker.

Who Can Be Implicated for Insider Trading?

But it isn’t always necessary for you to be a member of the organization to be a part of insider trading. Important decisions that may impact the share price involve parties that may not work within an organization.

Say for example A company planning to undergo a merger with another company will involve many third parties like bankers, lawyers, and other professionals who offer their services to the company. If they act on the information they receive they can be prosecuted for insider trading.

The implementation of various decisions taken by the company requires prior approval from the government. Hence government officials too can be incriminated for acting on the confidential decisions they receive while executing their duties.

Insider trading, however, is not limited to white-collar relations. Members of an organization or employees may share the information with friends or family or acquaintances. If this information that is yet to be made public is acted on they will also be prosecuted under insider trading.

Dilip Pendse served as the Managing director of Nishkalpa, a wholly-owned subsidiary of TATA Finance Ltd. (TFL). As of March 31st, 2001 Nishkalpa made a loss of 79.37 crores. This information was to be made public only a month later on April 30th. This information was price sensitive as it would lead to a fall in prices if leaked.

Dilip Pendse was in access to this information due to the role he played within the company. During this period Dilip leaked this price-sensitive information to his wife. In between this period, 90,000 shares which were held by his wife and a company jointly run by his wife and her father in law in Nishkalpa were sold in order to avoid losses.

Dilip Pendse, his wife, and the company jointly owned by his wife and her father-in-law were found guilty of insider trading. A penalty of Rs 500,000 was imposed on each of them and Dilip Pendse was banned from capital markets for three years.

Martha Stewart is a prominent TV personality who has also won an Emmy for her work on the ‘Martha and Snoops Dinner Party’. In the year 2001 Martha Stewart owned up to 4000 shares of the BioPharma Company ‘ImClone Systems’.

Her broker received a tipoff that the CEO of ImClone Systems sold all his holdings held in ImClone. The CEO did this as he received information that the FDA was about to reject one of ImClone’s cancer treatment drugs. Shortly after this news became public the shares of ImClone dropped 16% in one day.

Martha Stewart and her broker were announced guilty. She received 5 months in a federal correction facility and was fined $30,000. The CEO of ImClone Systems was also convicted and sentenced to 7 years with a fine of $ 4.3 million.

Rakesh Jhunjhunwala was probed by the SEBI in January 2020 on account of alleged insider trading. These allegations were based on the trades made by him and his family in the IT education firm Aptech. Aptech is the only firm in Jhunjhunwala’s portfolio in which he owns managerial control.

SEBI also questioned Jhunjhunwalas wife, brother, and mother-in-law. This, however, is not the first time that Rakesh Jhunjhunwala has been embroiled in insider trading controversy.

In 2018 too he was questioned over suspicion of insider trading in the shares of the Geometric. Rakesh Jhunjhunwala settled the case through a Consent order mechanism.

In a consent order, SEBI and the accused negotiate a settlement in order to avoid a long-drawn litigation process. Here an alleged violation can be settled by the accused by paying SEBI a fee without the admission or denial of guilt.

Foster Winans was a columnist at the Wall Street Journal. Due to the reach of WSJ, the stocks that he wrote about would react accordingly. Winans then began leaking the contents of his columns to a group of stockbrokers who would position themselves accordingly to make a profit.

Winans in an interview with CCR, “One day, I met a stockbroker, Peter Brant, and was going to write an article about him. After a few months, that kind of fell beside the wayside. He one day said to me — that column you write is very powerful, it moves stocks, you are doing a great job, how much do they pay you, isn’t it terrible, only $25,000 a year, with all of the skill and talent that you have, if you told me what you were going to write about the day before it is published, we’d make a lot of money.”

Winans took the deal offered by Peter Brant and was eventually caught by the SEC after being involved in 24 influenced trades over 3-4 months. But in this case, the information was the personal opinion of R. Foster Winans.

His defense argued in the courts that although what Winans did was wrong he still could not be considered an insider. This was because the case did not involve any insiders(people within a company or their relatives and connections).

He was still convicted as the information shared with the stockbrokers was not public until his column was published. Winans received a sentence of 18 months in prison which was later reduced.

Barry Switzer was the football coach for Oklahoma in 1981. While at a track meet he overheard some executives talk about some sensitive insider information. This led him to buy shares of Pheonix Resources. By doing this Barry Switzer went on to make a profit of $98,000.

Barry Switzer was later acquitted due to a lack of evidence. In this case, Barry Switzer would have been guilty if any of his players or someone he knew was related to the executives present at the track meet.

How to Avoid Being Implicated in Insider Trading?

After looking at the above it may be clear that dealing with data that is non-public could be just one step away from being accused of insider trading and hence become a victim of unnecessarily long litigation proceedings. The following steps help in avoiding this:

-If you are an employee or are dealing with an organization in a role that involves dealing with sensitive data it is important that you are aware of who you share your data with.

If you aren’t directly connected with the organization identify your sources ( whether they are in any way connected to insiders). Generally, organization employees and third-party players are required to sign a non-disclosure agreement.

-Even if you receive data that is important to your trade, verify that the data you have received is public. Do this by checking reliable public sources. If you find yourself in a dilemma it is best to report the information received to the authorities.

-Do not go looking for non-public information about the company from its personnel or those who deal with the company. This will further put you at risk of being investigated if the information is leaked out. You may be accused of insider trading even if you only divulge the info you have received, even if it was overheard.

Arguments for Insider Trading Being Legal

Foster Winans the WSJ journalist argued for insider trading asserting “ The only reason to invest in the market is that you think you know something others don’t.” Arguments have been drawn on who is actually harmed because of insider trading.

As your transactions take place with parties that have already decided on the position and want to sell or buy. The Atlantic even described insider trading as “ arguably the closest thing that modern finance has to a victimless crime.”

There have also been arguments made calling to legalize insider trading that involves dealing with negative information. It is because this is the information companies generally keep from their shareholders.

Milton Friedman who received the Nobel Memorial Price in Economic Sciences in 1976 said, “ You want more Insider Trading, not less. You want to give the people most likely to have knowledge about deficiencies of the company an incentive to make the public aware of that.”