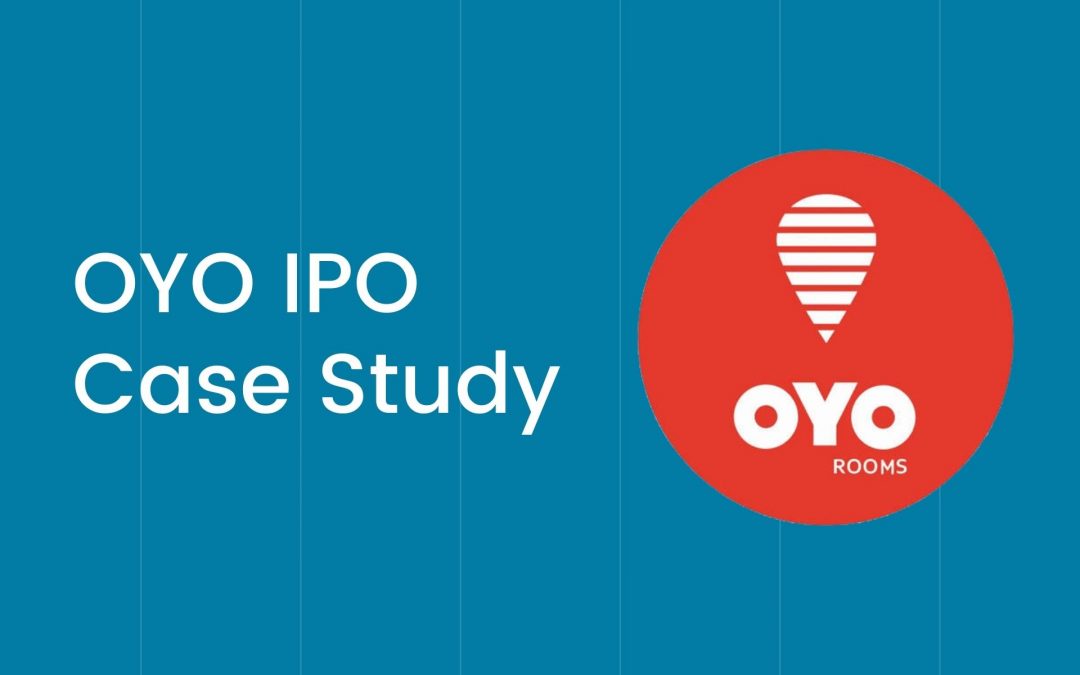 With its IPO in the pipelines the company also has created a lot of buss in the market. In this OYO IPO case study, we take a closer look at the company before the IPO. Keep reading to find out!

The brand exudes the charm and warmth of being a go-getter. The company was the first to identify the need for branding the domestic hospitality segment and offer hotel rooms within the price range of Rupee 999- Rupees 3,000.

Before the advent of OYO, the low and mid-budget hotel segment wasn’t online and barely managed while always falling short of customers’ expectations and expected parameters. This hotel unicorn brought uniformity in a vague landscape.

The traditional hospitality sector in India is highly divisive and fragmented. It is managed personally and often is a huge contrast from what it is sold out to be. If you pay the money you get excellent service, features and experience. If you don’t you get nothing.

OYO’s technology and a vision to bring budget hotels on board washed this segment with a plethora of changes, including being demographically fit with its user segment. At present OYO is currently valued at almost $9.6 Billion as per its latest funding rounds. This makes OYO the third largest startup in India after Byju’s & Paytm.

Even though live-in relationships and unmarried couples are considered to be taboo in India, it doesn’t absolve the need for couples to be intimate and spend some time together. This is why OYO walked the talk and rolled out hotels exclusively for unmarried couples at affordable rates. This concept worked well for the company and garnered a lot of appreciation & sales

Ritesh Agarwal started OYO in 2013 after dropping out of college. OYO started its operation in India. OYO operates over 1,57,000 storefronts (hotels and homes) across 35 countries.

India, Malaysia, Indonesia & Europe account for more than 90% of the hotels listed on the OYO platform. OYO claims to have the second-largest loyalty program in India with 9.2 million subscribers.

The company has an employee strength of 5,130 people with more than 70% of them in India. Out of the 5,130 employees, around 4,100 employees hold stock options as per internal sources.

The OYO app has been downloaded more than 100 million times which makes it on par with AIRBNB and booking.com. This shows the popularity of the company. A few major competitors of OYO are MakeMyTrip, EaseMyTrip, bookyourown.net, etc.

OYO has changed its business model from minimum guarantee contracts/fixed payouts to a revenue-sharing model during the covid pandemic.

OYO at present charges 20-35% of the gross booking value as commission from its Hotel Partners. The company at present does not hold any of the hotels and operates in an asset-light business model.

Oyo talks about its growth philosophy which is centred in three phases.

In the first stage, the focus is on scale and presence which is followed by creating a strong brand resonance and ensuring improved gross margin. In the final stage, which is where Indian operations are, the focus is to maintain strong brand preference while ensuring a clear path to profitability, enabled by accretive growth, operational excellence, and strong gross margin.

The company has reported losses in every year of its operations since its inception. Between 2014 and 2019, OYO has posted a consolidated net loss of Rs 3,564.4 crore. The company has posted its highest losses during covid in the year 2020.

A large part of these losses can be attributed to the fast expansion in newer geographies and newer businesses, deep discounting, building technology and renovating the hotels. OYO has also been on an acquisition spree completing 8 acquisitions in a period of 2 years. Its reported acquisition bill for just five companies  Innov8, Danamica, @Leisure Group, Hooters, Novascotia Boutique Homes stood at USD 591 million.

OYO up to date has raised $4.1 Bn from 26 investors across 19 rounds. While OYO has not raised any larger equity round for a long time, the company has recently picked up $660 million in debt from global investors. It has also previously raised $204 million in debt from SoftBank for its Singapore subsidiary OYO Hotels (Singapore) Pte. Ltd.

As per Ritesh Agarwal, Oyo still has cash of around $800 million in the bank. The monthly burn is in the range of $4-5 million across businesses in OYO. Currently, 43% of its revenue comes from India and Southeast Asia, while 28% comes from Europe and the rest from other global markets.

The company has cut down on its operations in markets such as the US and China. Even in India, it had to trim its workforce significantly to curtail spending in light of the pandemic’s impact on the books of the company.

The company has not mentioned any timeline as to when it plans to become profitable,

OYO IPO issue size combines a fresh issue of Rs 7000 crores and an offer of sale of Rs 1,430 crores. The founder Ritesh Agarwal and his company RA Hospitality holdings have a combined stake of 33.16% stake in the company.

SoftBank Group, which is the angel investor and has been backing OYO since the nascent stage has been the largest shareholder in OYO. SoftBank has also been classified as a promoter entity as per the DHRP prospectus has a 46.62% shareholding.

Further, Dinesh Ramamurthi, trustee of Oravel Employee Welfare Trust holds a 5.40% stake in the company. The shares are actually owned by the employees of the company. Sequoia Capital India, the private equity venture also has a 3.24% stake in OYO. Airbnb, the accommodation booking website, also owns a little over 1% of OYO.

Microsoft in September 2021  has also confirmed its investment of $5 million for a minute stake in OYO. Although the stake is very small, it is a strategic deal between the two companies.

OYO might shift to Microsoft’s cloud service platform Azure after this deal. Hence the significance of this deal.

The other prominent investors which include Sequoia Capital, Airbnb and others are not selling any of their respective stakes. Employees of OYO through ESOPS and stock options own up around 7% of the post issue outstanding shares.

Investment Bankers for the IPO

Kotak Investment Banking, JP Morgan Chase & co and Citigroup are the main book-runners and investment bankers for the company. The other bookrunners are ICICI Securities, Nomura Holdings, JM Financials.

The last fundraising round in OYO was done at a valuation of $9.6 billion.

The company also plans to mobilize another INR 2900 cr towards organic & inorganic growth initiatives. The rest amount will be put to general corporate uses.

Reasons to go for the IPO

OYO’s core growth markets are highly fragmented – Organised share in these markets is less than 12%. Most hotels/homes are run by individuals (no brands), making perfect hunting grounds for aggregator platforms that can consolidate supply. Online penetration has been a major growth boost, expanding to ~30% in India (~60% globally). Online short-stay accommodation continues to gain share growing at CAGRs of 34.3% &17.9% for India and South East Asia between 2015 and 2019.

OYO has demonstrated a strong business model – 70% of traffic from direct/unpaid channels. Repeat & new organic customers generate 78% of demand. Exclusive storefronts of 157K+ (70x of the closest competitor) across hotels/homes.

Strong tech DNA with 15% of the employee base in tech roles. 40+ integrated tech solutions for end customers/hotels/homes. Additionally, Strong ROI for hotel/homeowners helps them increase revenue by 1.5x-1.9x compared to revenue at independent hotels.

OYO has mentioned the summary of the outstanding litigations against the companies and their subsidiaries in its DHRP.

As of now, OYO has around 14 criminal complaints going on against its directors

Zostel alleged that OYO has misrepresented the facts in its DRHP and that the upcoming IPO doesn’t include the disclosure of a 7 per cent stake of Zostel’s shareholders in OYO’s parent entity.

The issue pertains to a 2015 proposed deal of ZoRoom’s acquisition of OYO, resulting in a transfer of a 7 per cent stake of Ritesh Agarwal-led firm to ZoRooms. The deal was not implemented after a minority investor in OYO objected to the buyout.

While we can’t put OYO Rooms in the same league as traditional hotel chains, since it is an aggregator and a startup, it still needs to overcome the perception of being only for the price-sensitive customer group. It is a technology-oriented marketplace and doesn’t have to encounter the usual challenges faced by a hotel.

However, the urge to become a market power, increase valuation and stay ahead of the curve is as-is. Besides, there are several e-commerce marketplaces such as Yatra and Trivago in the hospitality segment operating on similar lines of networking. Even the traditional hotels and hospitality giants are now online, and you can book your rooms within a few clicks too. You see, technology is hardly a disruptor anymore. Services and perceptions are.

OYO’s market value and share are threatened by the likes of Airbnb, Treebo, Zo Rooms and MakeMyTrip (MMT). However, OYO has outshined the homegrown MMT on social media, whereas Airbnb still stands tall owing to the perception of being a global and veteran player in this segment. Besides, the MMT and ClearTrip model is commission-based, while OYO works as a reseller.

OYO spent over $3 billion in the last four years onboarding and retaining more hotels to its website. Technology remains the core component of this unicorn startup along with its human assets.

Hope OYO IPO Case Study has provided you with all the information you require. Comment down below and let us know if you will be applying for it.