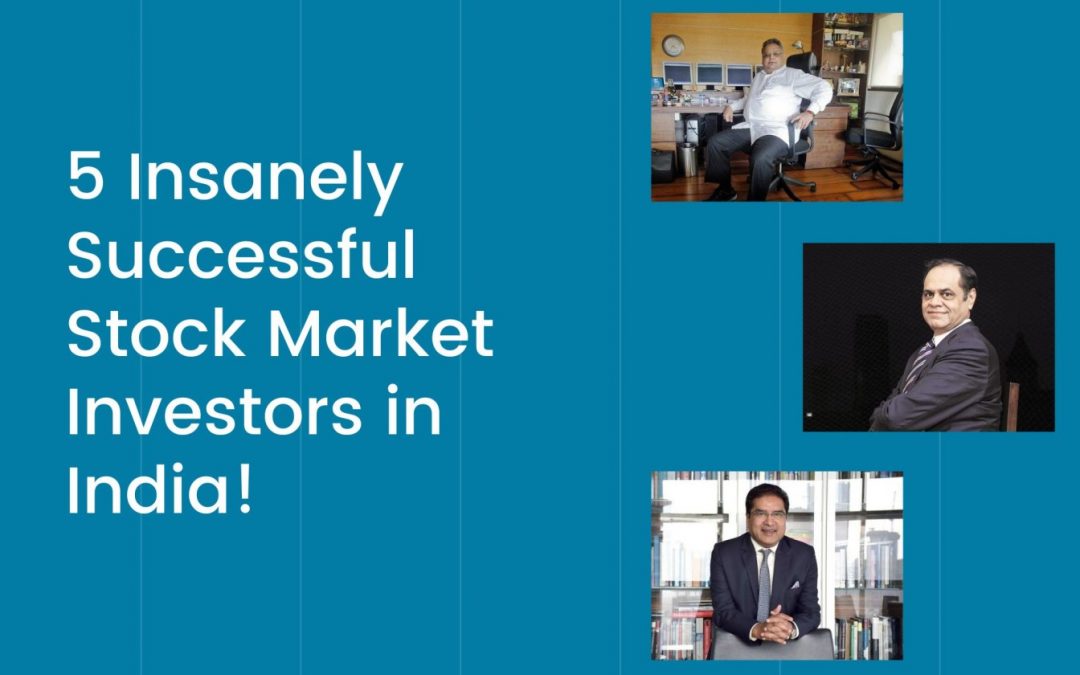 Anyways, before we start this post, let me take a quick quiz. How many such super successful stock market investors do you know.

Well, let me guess. Everyone who enters the stock market world might know about at least “Warren Buffet”. He is the greatest investor of all time and the fifth richest person in this world who made his fortune by consistently investing his money. Further, you might also have heard about few other prominent names if you’ve read some investing books. Those names can be Benjamin Graham, Charlie Munger, Peter Lynch, Mohnish Pabrai, etc.

But do you know any of the super successful investors who made tons of money by investing in the Indian stock market?

Yes, I can hear the name in your mind. Rakesh Jhunjhunwala. This name comes instantly in the mind of every Indian when we hear the term ‘RICH INDIAN STOCK MARKET INVESTOR’. But how much do you know about him? And what about the other super successful stock market investors in India?

In this post, we’re going to cover three of the insanely successful stock market investors in India. In addition, we’ll also introduce you to few other ace investors in India (as a bonus) whom you should know and take inspiration from. Let’s get started.

Rakesh Jhunjhunwala, also known as “The Big Bull’, is one of the most renowned and successful stock market investors in India. He has made a great fortune by trading and investing in stocks, which is an inspiration for all those who want to succeed in the Indian Stock Market.

The son of an income tax officer, Rakesh Jhunjhunwala joined the stock market after completing his degree as a Chartered Accountant. Starting with the initial investment of just Rs 5,000, currently, he is sitting on a huge net worth of around Rs 41,000 crores as of 2021.

Jhunjhunwala today manages his privately owned asset management firm “RARE Enterprises”. Interestingly, the name RARE is derived from the initials of his and his wife’s name. Here, ‘Ra’ from his name (Rakesh) and ‘Re’ from his wife’s name (Rekha). Rakesh Jhunjhunwala is also the chairman of Aptech Limited and Hungama Digital Media Entertainment Pvt. Ltd.

Looking back into Rakesh Jhunjhunwala’s journey, Mr. Junjhunwala’s ‘Risk and Reward’ taking ability was impressive from the very start. Along with it, his imagination & wisdom later earned him great profits in the stock market.

Quick Note: If you want to track the latest portfolio of Rakesh Jhunjhunwala or any other super successful stock market investor in India, you can find it at Trade Brains Portal. Here’s a quick link to Superstar Portfolio.

His first-ever large profit in the stock market was from selling 5,000 shares of Tata Tea which he had previously bought for Rs. 43 per share and selling them at Rs. 143. His later career was marked by his buying of six crore shares of Titan in 2003 at an average price of around Rs 3. The stock is still in his portfolio and currently trading at Rs 1200.

Rakesh Jhunjhunwala considers himself as both a stock market investor and a trader. He strongly believes and advocates the idea to invest in India, seeing the consistent growth of India and its rising economy. Mr. Jhunjhunwala is also confident in learning from mistakes. He often says- ‘Mistakes are your learning friends. The idea is to keep these mistakes small.’

According to Forbes 2021 Rich List, RK Damani is the 4th Richest Person in India.

Radhakishan Damani, also known as ‘Mr. White and White’, because of his simple dressing of White shirt and white trousers, is the richest stock market Investor in India and owner of D-mart. Coincidently, he is also the mentor of billionaire investor Rakesh Jhunjhunwala. RK Damani is known for his low profile and he rarely makes an appearance in public events or press conferences.

Quick Fact, On 21st March 2017 i.e. the listing day of Avenue supermart (parent company of D-mart), the stock price rose more than double, from the offer price of Rs 299 and ended up 116% upwards to Rs 648. In the IPO of Avenue Supermart, RK Damani made around Rs 6100 crores in just two days. RK  Damani owns around 52% stake in Avenue Supermarts, and Bright Star Investments – his investment company, holds another 16% stake.

At an age of 32, post his father’s death, RK was forced to close down his ball-bearing business and had to join his brother in the family stockbroking business, which was inherited from their father.

RK Damani had no idea of what to do in the stock market at that time. His knowledge of the stock market was very limited. He made many mistakes initially by speculating the stock prices. However, he soon understood that the market is heaven for those who are serious about it and want to make a great fortune in life.

When he got involved in stockbroking, he understood that he can’t make lots of money just by watching other people trade and invest. Finally, he started trading and investing in the stock market, rather than just stockbroking. Gradually, his judgment began getting right, and within the next couple of years, he was standing as one of the most successful investors in the market.

RK Damani’s strategy is quite simple- Invest in good companies for the long term. RK Damani always sees the future prospects of the company before investing and invests only if the product has potential far ahead in the future.

“I learned that just because a stock doubles, it is not a reason to sell it.”- Ramesh Damani

Ramesh Damani, the investment guru and one of the most successful stock market investors in India, started his journey to riches in 1990s when Sensex was 600 points. He holds a bachelor’s degree in commerce from HR College, Mumbai, and a master’s degree in Business Administration from California State University.

The son of a successful stock investor, Ramesh Damani became a member of the Bombay Stock Exchange(BSE) in 1989. Initially, Ramesh planned his career as a stockbroker. However, later he started enjoying picking winning stocks and switched to become a long-term investor.

Ramesh Damani’s first famous investment was ‘Infosys’. Coming from a techie background in the US, he knew that Infosys has great future potentials. Therefore, when Infosys became public in 1993, he invested Rs 10 lakhs in it. By 1999, this investment has given him more than 100 times return.

The investment philosophy of Ramesh Damani is easy and simple to understand. He is a long-term investor and suggests not to invest for short-term gain. Further, he advises everyone to make an exit strategy clear before making an investment in any stock. He further adds that the economy of a market is hard to predict; however if you have researched the stock carefully, and had made a good strategy, then you can easily make fortunes in the stock market.

Raamdeo Agrawal, the co-founder of Motilal Oswal Group, is another most respectable stock market investor in India. During the last 30 year career, Raamdeo Aggrawal investing strategy is based on QGLB: Quality, growth, longevity, and bargain value of a company.

He is famous for investing in the legendary stock of HERO Motocorp (Hero honda back then) in 1995 when HERO was a small-cap with a market capitalization of only 1,000 crores. Raamdeo Aggrawal invested around Rs 10 lakh in the shares of the two-wheeler manufacturer at Rs 30 apiece, and held on to them for the next 20 years, till the share price rose to Rs 2,600 apiece. Today, the market cap of HERO Motocorp is above 73,000 crores.

Like most great investors, Raamdeo Aggarwal too follows the principles of long-term investment. Among his favorite books to read are ‘The Intelligent Investor‘ by Benjamin Graham and ‘One Up on Wall Street‘ by Peter Lynch. Further, he is also excited by Michael Porter’s ideas on the competitive structure.

“After 30 years, I understood economic moat is the mantra of investing” -Raamdeo Agrawal

Raamdeo Agrawal suggests the investors not be driven solely by market trends and advice to research the stock intelligently before investing.

Like many other investors on this list Vijay Kedia brings with him exceptional stock market knowledge and an even more inspirational story. Despite being born into a family of stockbrokers his journey in the stock market was filled with hurdles. Despite finding his passion in the stock market at an early age of 14 he was forced to enter the stock market at 19 due to the demise of his father. He joined his family stock broking business but didn’t see himself working here. He then ventured into trading where he would find way more success.

Vijay Kedia is also well known for his rather unique investing strategy. He calls it SMILE, which is an abbreviation for Small in size, Medium in experience, Large in aspiration, and Extra-large in market potential. Some of his notable investments from 2004 went on to increase over 100 times over the next 10 years. Some of his top stock picks over his career include Atul Auto, Aegis Logistics, Cera sanitaryware.

As promised, here is the bonus section. List of a few other best stock market investors whom you should know. Further, I have added a link to each of the investors so that you can read further.

Other FAQs on Successful Stock Market Investors in India

1) Who is the most successful investor in India?

Rakesh Jhunjhunwala, also known as the “Big Bull” in the Indian stock market, is most popularly considered as the most successful stock market investor in India. Mr Jhunjhunwala grew his fortune in the stock market from a humble beginning of mere Rs 5,000 to Rs 41,000 Cr as of 2021. Apart from him, RK Damani, Ramesh Damani, Raamdeo Agarwal, and Vijay Kedia are also considered very sufficient investors in India.

2) Who are the biggest traders in India?

Rakesh Jhunjhunwala, the most successful stock market veteran in India, considers himself as both a trader and investor. He has made a big chunk of money during his initial days in the stock market through trading in stocks and hence is also considered as the biggest trader in India.

3. Who is the king of Dalal Street?

Harshad Mehta was considered the ‘King of Dalal Street’ or ‘Bachchan of Stock Market’ in the 90s, owing to his massive success in the Indian stock market. However, after him, Rakesh Jhunjhunwala is currently known as the biggest player in the Dalal street market.

4. Who is the king of the share market in the World?

5. Who is the most successful stockbroker in India?

The Kamath brothers, Nithin Kamath and Nikhil Kamath, who are the founders of Zerodha (the biggest stock brokerage firm in India) are considered to be the most successful stockbrokers in India. Both are billionaires and are ranked among the top richest men in India according to the Forbes list.

6. When did Rakesh Jhunjhunwala started investing?

7. How to know the portfolio of Big Investors?

You can follow the news, daily Bulk/Block deal announcements and check the shareholding pattern of the companies to know the portfolio of big investors. Else, you can also easily track the portfolios of Big Investors in India using the Superstar portfolio tool at Trade Brains Portal.

8. Do successful investors fail in the beginning?

9. Is Rakesh Jhunjhunwala a broker?

10. What is the lowest qualification of a successful investor?

That’s all. We hope this post on “3 Insanely Successful Stock Market Investors in India that you need to Know” is helpful to the readers. Please share the post if you liked it. Further, do comment below who is your favorite Indian stock market Investor? Happy Investing.