Is Valuation of IPOs Justified? What are the Causes for the Valuations? 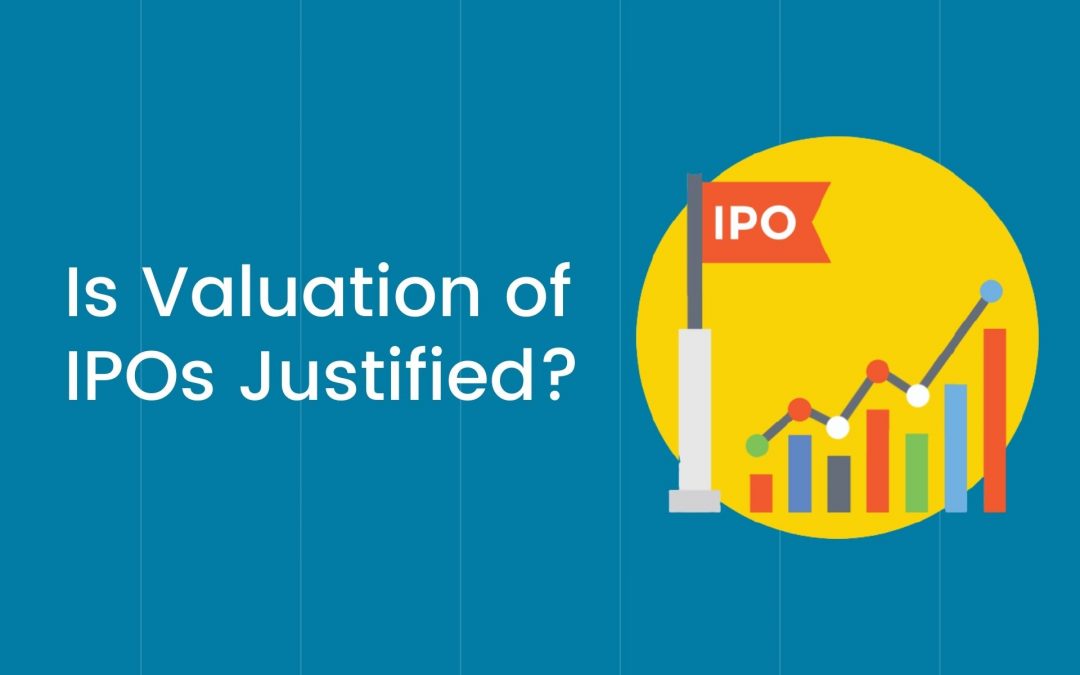 Understanding valuation of IPO: The last one year has been one of the most exciting one we’ve gotten to see yet in the Indian markets. One of the most important focus during this period has been the stellar list of IPO’s. But along with their excitement their valuations has brought forth new found questions. Is the valuation of IPO justified? Is this because the markets are in a bubble?

In this article we take a closer look at the valuation of IPO over the last one year and try to further analyse them inorder to answer these questions. Keep reading to find out!

Investors in the Indian stock market witnessed one of the worst ever sell-off as news of Covid-19 pandemic spread with lockdowns also coming into effect. Rightly as predicted this has had a severe effect on the Indian economy. The Indian indexes Nifty and Sensex saw one of the worst falls of 33% as a result of a panic fuelled sell-offs. The period was filled with widespread confusion and pessimism in the stock market.

But all this vanished once the lockdowns were lifted allowing the economy to breathe once again. The stock market rebounded faster than expected. But a ‘rebound’ wouldn’t make an accurate description as the markets began setting new highs. This was despite concerns of widespread unemployment and GDP contraction in the country. But none of this dented the new found optimism in the market.

And what better way to celebrate this new found optimism that a flurry of IPOs. Like other reasons to celebrate in our lives an IPO too falls among the same lines in the stock market. Retail investors now have the opportunity to invest in the future of a company that could turn out to be a goldmine in the long run and also for listing gains.

IPO’s late last year were welcomed with open arms. IPO’s of Mrs. Bectors, a company engaged in baking and the IPO of fast food chain operator Burger King received mind blowing subscriptions of more than 150 times. However this was only the beginning of the 2021 IPO story.

How do the IPOs for 2021 Compare to Other Years?

By September Indian IPO’s had raised as much as $10 billion which was more money than that raised in the last 3 years according to a report by Goldman Sachs. In addition to this, according to Goldman over 150 companies could list on the stock market in the next 36 months adding as much as $400 billion in market value.

It is safe to say that the markets were flooded with IPOs. And not just that most of them have seen stellar listing gains and with quite a few further reaching new heights.

This response was not only directed towards the primary markets. So far India has seen over 40 startups turn into unicorns. According to GoldmanSachs India has at least 67 unicorns currently in 2021.

However this has also bought up several concerns among investors. Questions on valuation of IPO are constantly thrown around. And worse on whether the Indian markets are in a bubble.

To understand the current scenario on IPOs better lets have a look at some of the IPOs that have gone by. Most of these tend to be companies that form part of the new economy. New economy is a term used to refer to high-growth industries that use or bring forth cutting edge technology.

These companies are known to be the driving force of economic growth and productivity. Most of these IPOs have gotten oversubscribed thanks to their widespread popularity and little to do with valuations. Some of the recent IPOs which fall into this category are Nykaa, Zomato, Paytm, etc.

One of the most recent IPO flops was Paytm. The IPO was one of the most awaited IPOs this year which led to widespread hype. If we take a closer look at Paytm’s history, the company had a important role to play during demonetization. But in the recent past the company failed to capitalize on the developments like UPI.

Even though the company later adopted the technology it was too late. Today Paytm has lost a major portion of the market share to other players with a UPI base. In addition to that the company doesn’t offer products that are too different from its competitors.

When it comes to profitability Paytm’s results as of March 2021 showed losses amounting to Rs. 1,701 crores. Despite that according to analyst estimates, the company was valued 26 times its price to sales ratio.

What followed was a pale response in the IPO. Institutional investors and HNI’s who took note of its valuation showed less than moderate interest to the IPO. During the initial days their subscribed only 6% and 2% to the portion reserved for them. Retail investors however caught onto the hype leading to oversubscription of the portion reserved for them by the time the offering ended. What followed were the shares listing at a discount and falling further.

A Look into Other Concerning IPOs

Policy Bazaar is another company that has similar profitability concerns. Despite existing for more than a decade this company too is not profitable. The company is valued at 48 times its revenues which thankfully at least has doubled in the last 2 years.

According to PolicyBazaar’s valuation they are worth 70% the valuation of established industry player ICICI Lombard General Insurance. This is despite their revenues making up only 8% of that of ICICI Lombard. Zomato again falls into the list of IPO with profitability concerns but with wild valuations. And the list of concerns with valuation of IPO keeps going!

Oyo, the company that is considered to be revolutionary to the hotel industry too is expected to opt for IPO in the coming months. Again despite having profitability concerns it is valued 3 times that of Tata owned Indian hotels.

Valuation concern however are not limited to new age companies. If we take a look at the Indigo Paint IPO which we had at the start of the year. On listing the shares of Indigo paints rocketed 100% giving it a valuation of 200 times its profit. This is in stark contrast to Asian paints which has a P/E ratio of 83 times.

What are the Causes for the Valuations?

It goes without saying the Indian markets have experienced its fair share of bullish markets in the last one year. A general trend during bullish markets is the entrance of several companies through IPOs. Bullish markets generally tend to slightly increase the possibility of over valuing companies.

What further accentuated this was the increased liquidity in the country. In an attempt to boost the economy the central bank and government resorted to pumping money into various economies around the world.

This money somehow has found its way to the stock market. In addition to this, many white collar employees have managed to change their lifestyle and stay employed at the same time during lockdowns. This has resulted in widespread saving allowing them to take on stock market risks.

However when we specifically look at new age companies, what drives interest towards them? These companies are widely popular reaching every investor’s life including those who are novice. However one segment where investors suffer here is comparability. These companies are first of its kind to enter the market which makes it harder for investors to have a benchmark to compare their performance.

Hence investors invest based on the possibility that these companies may become profitable in the future and also keep gaining market share. Unfortunately for most of these kind of companies they have been guzzling cash in an attempt to make a mark in their particular niches.

The problem as always that investors face is identifying the next big thing. But the problems seem to be in multifolds here as they are paying way more. Here’s what Nikhil Kamat founder of Zerodha had to say about the current state of IPO’s, “Firstly, I’m glad that these guys are coming into the public markets versus raising capital from private equity, and foreign money essentially. In terms of valuation, even though these companies are growing, I don’t quite agree that the multiples that they have put out for the market to subscribe at are justified.”

It is important that the investors are play a smarter role instead of simply following the herd. Even a simply observation on IPO subscription status till the 3rd day and its composition of HNI and institutional investors will go a long way to help. This instead of simply jumping in on the first day that the IPO opens. That’s all for this post “Is Valuation of IPO’s Justified?”. Let us know what you think about the current state of IPO’s in the Indian markets in the comments below. Happy Investing!