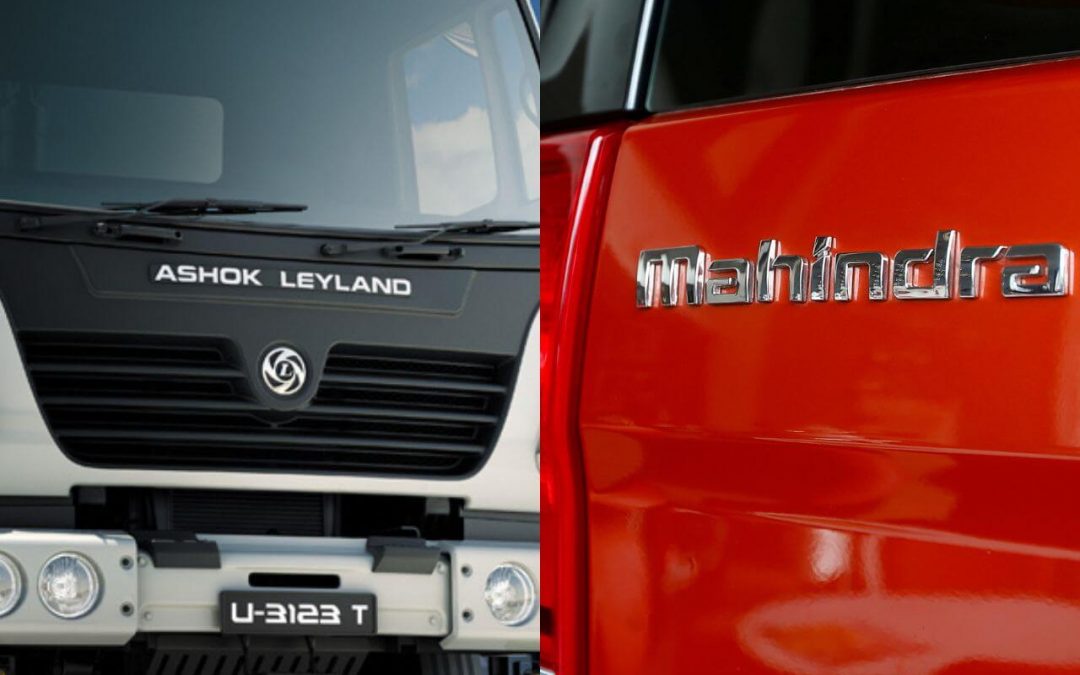 Ashok Leyland Vs Mahindra & Mahindra: The Indian automobile industry witnessed deceleration in the last two to three years. For starters, people did not even step out of their houses for prolonged periods due to lockdowns. Buying automobiles then did not make sense. Once the restrictions were eased, declining economic growth rate, higher insurance costs, road tax, and uncertainty contributed to the slump.

But as off late there are a few things that we just have to mention. The pandemic and the geopolitical issue between Russia and Ukraine are two of those. These factors caused a slowdown in various industries across the world.

Then there was also the semiconductor crisis. Companies around the world failed to meet the rising demand for a wide range of products including automobiles, televisions, refrigerators, washing machines, personal computers, laptops, mobiles and so on. As a result, many Indian companies forayed into the semiconductor business.

In this article, we shall take a look at the automobile industry in India and compare Ashok Leyland and Mahindra & Mahindra on the basis of product offerings, profitability, fundamentals and more.

This year, companies saw reasonable growth in commercial vehicles and passenger vehicles. A downtrend in sales continues as far as two-wheelers and three-wheelers are concerned.

The auto industry is facing adverse impacts of the Russia- Ukraine crisis, the resultant surge in oil prices and the lockdown in China due to COVID-19. Russia and Ukraine are one of the largest producers of palladium and neon gas, respectively. These components are essential for semiconductors that are used in vehicles.

Ashok Leyland vs Mahindra & Mahindra- About the companies

Ashok Leyland is the flagship Company of the Hinduja Group. Raghunandan Saran, an industrialist founded the company Ashok Motors in 1948. In 1955, a British company, Leyland Motors Ltd. increased equity participation in the company and it became Ashok Leyland.

The company has a well-diversified portfolio across the automobile industry. It manufactures buses, trucks, light commercial vehicles, and defence vehicles. Further, it also makes spare parts and engines for industrial, genset and marine applications.

Ashok Leyland is one of the most fully-integrated manufacturing companies. It has a strong brand value and a well-diversified distribution and service network across the country. It has footprints in over 50 countries across the world.

It manufactures two-wheelers, three-wheelers, passenger vehicles, commercial vehicles as well as tractors and earthmovers. The Automotive sector contributes 56% of the total revenue to the company. The group has a presence across 22 industries in more than 100 countries.

Revenue refers to the total money that a company makes by selling its products or services. The chart indicates the annual consolidated revenue that these automobile companies made over the last five years.

Mahindra & Mahindra Limited’s revenue has been higher than that of Ashok Leyland. However, the trendline indicates that it saw a steeper decline in its revenue. Both the companies reported high revenues just a year before the pandemic struck. Soon after, their revenues declined.

The net sales of Ashok Leyland showed a decreasing trend over the last five years. However, the sales of Mahindra & Mahindra showed an increasing trend.

This ratio shows us the percentage of revenue that is left after all the expenses have been deducted from the total sales. A high net profit margin indicates that a company is pricing its products correctly and controlling its costs. A net profit margin between 10% and 20% is considered to be ideal. Both, Ashok Leyland and Mahindra & Mahindra have low net profit margins as shown in the table.

EBITDA stands for earnings before interest, taxes, depreciation, and amortisation. Therefore, EBITDA margins show an organisation’s operating gains in terms of a percentage of its overall revenues. Ideally, EBITDA margins should be at least 10% or more. Both, Ashok Leyland and Mahindra & Mahindra have ideal EBITDA margins.

This ratio measures how effectively the management uses a company’s assets to generate profits. For example, an ROE of 1 means that the company generates ₹1 income for every ₹1 invested in equity. Ashok Leyland has a negative ROE of -0.89 for the year 2021. Mahindra & Mahindra has a positive ROE of 0.57.

ROCE helps us to understand how well a company is able to generate profits from its capital. It is particularly useful for capital intensive sectors. Some people believe that there is no ideal ROCE. They consider that a higher ROCE is better, in general. Others say that the ROCE should be at least twice the prevailing interest rates. Currently, Mahindra & Mahindra’s ROCE is better than that of Ashok Leyland.

This ratio measures a company’s profitability in relation to its total assets. A return of 5% to 20% is ideal. Currently, both companies have a low return on assets.

EPS indicates a company’s profitability. It shows the portion of a company’s profit that can be attributed to each share. A higher EPS is considered to be better. Mahindra & Mahindra has a very high EPS as compared to Ashok Leyland.

This ratio shows us how much dividend a company pays out in relation to its stock price. It will be high if the dividend remains the same, but the stock price falls. Hence it does not necessarily indicate a favourable investment. Mahindra & Mahindra’s dividend yield is higher than that of Ashok Leyland.

It helps us to understand how much the market is willing to pay for a company’s earnings. A high PE indicates that a stock is overvalued and vice versa. The sector PE for both of the companies is lower than the industry average.

It compares a company’s market value to its book value. The book value refers to the net assets of the company. Stocks might be undervalued if it is below 1 and vice versa. Mahindra & Mahindra’s PB ratio is lower as compared to Ashok Leyland.

This ratio calculates the degree to which a company’s operations are financed with the help of debt. It should be between 0 and 1. Both the companies have a high debt to equity ratio.

The current ratio measures a company’s ability to pay short-term obligations or those due within one year. the ideal current ratio is 2. This means that a company should have 2x current assets as compared to its current liabilities. Both the companies have a low current ratio. However, Mahindra & Mahindra’s current ratio is better than Ashok Leyland’s as of now.

The company has the largest fleet of logistics vehicles deployed in the Indian Army. It has significant partnerships with armed forces across the globe. It is the first truck and bus manufacturer outside of Japan to win the Deming Prize for its Pantnagar plant in 2016 and its Hosur plant in 2017.

Ashok Leyland has been at the forefront of the commercial vehicle industry for decades due to its understanding of the customers and local market conditions.

Mahindra & Mahindra Limited is one of the most diversified automotive companies in India with a presence across 2-wheelers, 3-wheelers, passenger vehicles, commercial vehicles, tractors & earthmovers.

It is the 4th largest Passenger Vehicle, 2nd largest Commercial Vehicle and Largest small commercial vehicle (LCV) player in the domestic market of India. Mahindra & Mahindra plans to launch 9 new SUVs and 13 new LCVs by 2027. 6 of these vehicles will be electric vehicles. It is a dominant player in the local tractor industry in India. Its brands include Mahindra, Swaraj and Trakstar.

Presently, the company has a total of 68 manufacturing facilities for the production of Automotive, Tractors & farm machinery, two-wheelers and others. Out of these, 41 facilities are located in India and the rest are in various countries like the USA, Turkey, UAE, Algeria, and so on.

Ashok Leyland has one of the largest and fastest-growing networks with 52577 touch points that includes 1721 exclusive touch points and 11,000 outlets for Leyparts. It has a service centre every 75 kilometres on all major highways. This allows it to its “Ashok Leyland Quick Response” promise of reaching customers within 4 hours and getting them back on the road in 48 hours. It manages 12 driver training institutes across India and has trained over 18,00,000 drivers since its inception.

Mahindra & Mahindra Limited has 21 R&D centres across nine countries. It is a full range automotive player that has a presence in five distinct business streams. These are automotive, aerospace & defence, mobility services, agribusiness and farm equipment. It exports its products to over 35 countries. The company operates pan-India with a footprint of 100+ dealerships.

It is committed to the Environment, Social and Governance agenda and is driving various initiatives under each category. Its flagship program ‘Road to School’ ensures the well-being of its beneficiaries. It aims at the holistic development of children through nutritional support, physical development through sports, improvement in the quality of education, and promotion of arts and culture. This initiative has touched the lives of over 1 lakh children across 1100 schools.

With the help of its Jal Jeevan Project, it is installing RO water purification plants in villages where there is a dire need for clean drinking water.

Ashok Leyland ensures that its stakeholders- be it drivers, mechanics and all the millions of passengers who use their vehicles drive in comfort and ride with safety. It endeavours to serve its stakeholders, and create value in the realms of people, planet and profit, in line with its brand philosophy of ‘Aapki Jeet. Hamari Jeet’.

The company’s responsibility toward the environment remains one of its top priorities across all its businesses and other initiatives. Mahindra & Mahindra is working towards making the world greener, cleaner and a better place to live in with the help of sustainable operations.

It has an after-sales digital platform ‘With You Hamesha’. This platform ensures digitised contactless service. It assures safety and convenience for customers, in addition to saving paper that was earlier used for printing in service centres, by 40%.

A few restoration activities undertaken by the company are

In this article, we took a look at the automotive industry’s overview. We looked at quantitative as well as qualitative data related to the companies. Both the companies have a long-established presence in India and abroad. They have been resilient throughout the pandemic and the ongoing geopolitical crisis.

We hope that this article gave you insights into the companies. If it did, do share this post with anyone who might find it insightful. That’s all for this article. We hope to see you around and happy investing, until next time.